Home Tips & Tricks How to Tell If Dew Claw Is Dislocated 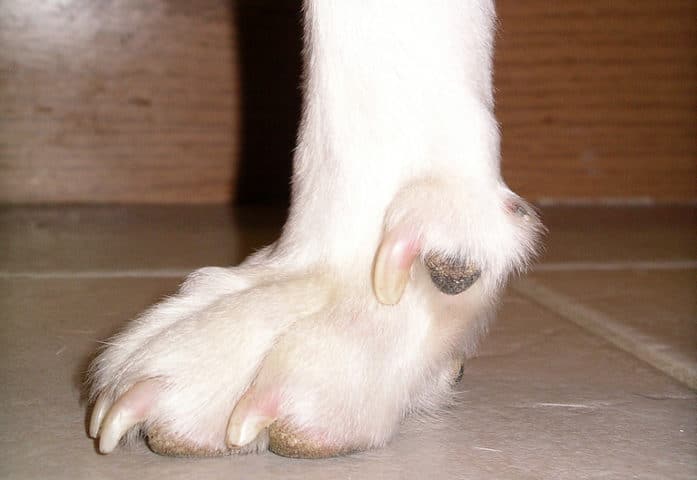 Being a responsible dog owner means more than simply loving your pup. It is a serious commitment, especially when it comes to ensuring that the needs of your furbaby are met.

Besides providing your dog with food and shelter, you also need to take care of things like grooming and everything that can improve his health and well-being.

A responsible dog parent, for instance, should be able to notice whether his dog have declaws (and whether they are healthy) so that he can take care of them properly.

Dewclaws are simply short nails on the side of your dog’s foot. They are positioned higher up on the paw and don’t touch the ground. They are like the human thumb though they have a lot less purpose (compared to our thumbs).

The majority of dog’s dewclaws are located on their front paws through some breeds exhibit dewclaws on their hind feet. There are breeds with double dewclaw (or an extra toe).

Some people assume that dewclaws are vestigial and serve absolutely no purpose. However, this is not the case as these claws serve certain roles. For instance, when your pup wraps his paws around objects, it is these claws that offer him extra grip.

Besides, when your dog is running, the dewclaws act as a stabilizer. When he makes a sharp turn, for instance, the dewclaws splay out and help him spin. These claws also take off pressure from other dog’s toes during such turns.

So, without the claws, your dog can damage his toes or injure his wrist joints. This is also one of the reasons why the dewclaws sometimes get dislocated.

The claws are not only connected to your pup’s legs with muscles (and sometimes bones) but they are also more loosely attached compared to other nails. This means that they are more likely to get caught on things and get dislocated or torn off.

So, how do you know that your dog’s dewclaw is dislocated?

Well, if the dewclaw looks like it is out of place from your pup’s leg, there are high chances that it is dislocated.

There are also a few signs to watch out for, including:

What Should You Do When Your Dog’s Dew Claw Is Dislocated?

When you notice that your dog’s dewclaw is dislocated, the first thing you should think about is how you can reduce the risk of the dewclaw getting infected.

Apply a simple dressing on the affected area to reduce the risks of infections. We recommend using a sterile pad from your doggy first aid kit and a stretchy bandage wrap.

If the dog is persistently licking the dislocated dewclaw, discourage him immediately—if possible, get him to wear a cone. Remember that the mouth harbors a lot of bacteria, which can introduce infections where none existed.

If there is active bleeding, use styptic powder (or flour) to stem the bleeding ASAP. Cover the dewclaw with the powder or flour and gently apply pressure with a clean cloth until the bleeding stops.

But if there is no continuous bleeding, consider putting something like a sock on the dog’s foot so that the dewclaws are not further dislodged and cause recurrent bleeding.

Finally, call your vet for more professional input. Provided that the dislocated dewclaw is not bleeding and you’ve managed to put something like a sock on the affected foot, your furbaby should be alright until your vet arrives.

Related posts: How to Stop a Dog from Licking his Wound without using a Collar

Dislocated dew claw could lead to infections and other health issues due to its connection with the bone and/or leg muscles.

So, the sooner you call your vet or implement the above-mentioned suggestions to ease your pup’s discomfort and reduce his risk of the area getting infected, the sooner your canine friend will be back to his old self again.

The best strategy for preventing dew claw dislocations and other mishaps is to keep your pup’s nails short with regular trimming.

Although dewclaws don’t have a lot of functions on the modern dog, they can cause problems if they are not well-trimmed.

Consider keeping your dog’s dew claws trimmed with the rest of his nails, and you will always avert the trouble of dislocated or torn dewclaws.

While trimming your dog’s nails, ensure that you don’t cut the quick (or the blood vessel that runs through the dog’s nail).

We recommend using nail clippers with light as they can help you see the quick fast, especially when you are dealing with black nails.

If it is your first time trimming a dog’s nails, ask your vet or a local professional groomer for more tips on how to do it effectively and safely.

Claw Caps for Dogs: A Better Alternative to Declawing

How to Find the Quick on Black Dog Nails

Why You Should be Filing Dog Nails Instead of Clipping

Your dog is most likely to injure his dewclaw when running or walking on hard, uneven surfaces (like gravel, cracked asphalt), carpet, or any other surface where his nails may become caught. If your pup is prone to dewclaw injury, invest in appropriate dog boots to protect his feet.

Should You Remove Dislocated Dew Claw?

The short answer is: it depends with the extent or seriousness of the dislocation.

If it is a minor case—the dog isn’t feeling extreme pain and there are no signs of infection—it shouldn’t be a big deal.

Your vet will perform a number of procedures (including manually replacing the claw  to its original orientation, trimming the claw, cleaning around the area, applying bandage on the affected area, doing cold compresses, etc) to stabilize the affected area, reduce inflammation, and prevent aggravation  of symptoms.

If it is an extreme case of dislocation or if your dog repeatedly dislocates or injures the claw, you can consider removing it permanently. This usually involves surgical amputation of the digit that the dewclaw grows from.

It is also advisable to remove dewclaws in polydactyl breeds to prevent injuries.

However, you should note that removing your dog’s dewclaw means that some of his paw muscles will atrophy considering that they won’t be used anymore. As a result, your dog may be at risk of health conditions like arthritis, especially if they are working or sporty.

Bottom line: where possible, it is highly recommended to let treat the claw and allow it to heal and re-grow because of its benefits to your canine friend.

Remember that if your dog has a dewclaw, it has a definite purpose. Probably it is there to stabilize your Fido’s wrist joint or offer him extra traction when running.

Some dogs also need their dew claws to climb trees (like Catahoula Leopard) or get out of water when they break through the ice (like Huskies).

Hopefully, you can now tell if your dog’s dewclaw is dislocated or injured.

Generally, many cases of dewclaw dislocations are fixable with the right treatment. And maintenance of a dog’s dew claws is always within the skillset of every responsible dog owner.

So, never overlook the seriousness of any form of dew claw injury in your pup nor should you ignore the value or purpose of the claw to your dog.

Finally, if your pup has been treated for dewclaw dislocation or injury, don’t forget to examine his bandages regularly (or as often as your vet recommends) for potential signs of infection.

Infections do spread fast, so keeping your pup’s dewclaw injury clean is the best way of ensuring that he gets back to his old healthy self again.

How Late Can You Remove Dew Claws?