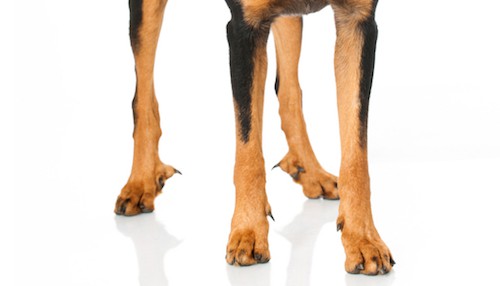 Most canines have paws that have four toes on the paw but they also have another fifth toe that is positioned a little higher than the other toes.

This fifth toe is what is referred to as a dewclaw. Just think of this dewclaw as similar to the human thumb—and just like the thumb, canines use the dewclaw for grasping.

Depending on the breed, the dewclaw can be on the front or the rear of the foot and they can also be both on the front as well as the hind feet.

Front dewclaws have undisputed importance but the hind dewclaws usefulness is debatable.

As a result, some breeders opt to declaw them when the puppies are still small.

It is believed that removing the hind dewclaws can help to prevent injury of the dog in adulthood.

Rear dewclaws that stick out and yet are not firmly attached to the bone are bound to cause injury and it’s usually best to remove them.

This should only be done by a veterinarian and the procedure should happen when the puppy is a few days old.  That said, rear dewclaw injuries are not that common.

Several dog breeds can have hind dewclaws but only a few breeds need them as part of the breed standard.

In fact, rear dewclaws have to be removed in some of the breeds to meet the standard.

In some breeds, owners are allowed to choose whether to declaw or not.

You should be careful when choosing to declaw because the anesthetics used for the surgery could result in some unforeseen complications.

Related Post: How Late Can You Remove Dew Claws?

Most breeds that have hind dew claws have their origins in Europe which could suggest common ancestry.

But it is also probable that the trait evolved from the breed’s lifestyles that are characterized by native terrains.

It’s also interesting to note that most of the breeds with hind dewclaws are huge breeds—even though there are a couple of exceptions.

The following are some of the small dog breeds with rear dewclaws.

Dewclaws are removed in some bulldog breeds but Frenchies are usually allowed to grow with them.

However, this depends on the breeder because some opt to remove them in a bid to make the dog look prettier.

The dewclaws of French Bulldogs are usually attached firmly to the leg and you can even detect the bone that connects it to the leg.

French Bulldogs use their hind dewclaws the same way we use our thumbs – for grasping.

They use it to grasp toys, food, or just get a tighter grip.

A Chihuahua has 4 pads and 4 main toes that have toenails.

In addition, Chihuahuas can have either one or two dewclaws on their front legs.

Not every Chihuahua has the hind dewclaws though because some breeders elect to remove them.

When the puppies are small, the dewclaw is just a soft nail that is easy to detach.

But if left undisturbed, it will gradually grow into an appendage with muscles and bones and therefore become an extra toe.

According to the AKC, a Chihuahua that is being bred for the show should have the hind dewclaws removed.

For home pets, the owner has discretion. Some owners prefer to remove the dewclaws to avoid unnecessary scratches on furniture.

Catalan Sheepdogs were bred for herding sheep but they have proved useful in herding other livestock including pigs, goats, horses, and even chickens.

This might be one of the reasons why it’s a breeding standard for these dogs to have double-boned dewclaws on both of their hind legs.

Some even have the dewclaws on all four legs.

The dewclaws help to give them traction when running which helps them to run faster and mark sudden turns without losing stability.

They also lower their heads while running and that coupled with their short feet help to lower their center of gravity which gives them a better balance.

The Dachshund is another small dog breed that has rear dewclaws on its front legs.

The puppies of this breed are born with dewclaws on all four feet but according to the AKC breed standards, the ones on the back feet have to be removed.

Removing the rear dewclaws on the front legs is however at the discretion of the owner or breeder and lots of people chose to retain them.

But don’t let their small size fool you—these dogs are vivacious hunters and can be quite stubborn and brace in equal measure.

In some quarters, the Briard dog breed is loosely referred to as a “heart wrapped in fur.”

This is because of its impeccable loyalty and love that will make even the stoutest of hearts melt.

According to the AKC breeding standard, the Briard ought to have at least two dewclaws on both hind legs.

However, Briards with dewclaws on three of four legs are also common.

The dewclaws help the dog to move with a nimble-footed gait that is quite a sight considering their rugged and burly nature.

The Iceland Sheepdog is required to have at least one dewclaw on both of the hind legs.

However, it is not uncommon to find an Iceland Sheepdog with double dewclaws on both hind feet.

In some rare cases, you can get puppies with 3 sets of double claws (on both hind feet and one front foot) or even one with double claws on all fours.

Puppies that have four sets of double dewclaws are referred to as Alspori and they are considered exceptional because they are very rare.

The Cao Fila de Sao Miguel dog breed, also referred to as the Saint Miguel Cattle Dog, is a small– medium-sized dog whose breeding standards allow for retention of the rear dewclaws.

As the name suggests, this breed hails from São Miguel but it is now very popular in North America.

The dewclaws make this breed well adapted for agility and that is why they do very well in agility sports, herding events, tracking, and obedience.

Other notable traits include a deep chest, long legs, drop ears, and a straight back.

For the most part, declawing is a safe procedure with minimal risk as long as it is done with a veterinarian and when the pup is a couple of days old.

Once the pup heals, no special care will be required as the dog will lead a normal life thereafter.

Declawing might have a slight impact on the speed and mobility of your dog but it will be negligible.

This can only be a problem if speed is a prerequisite for your dog – e.g. for work and guard breeds.

If the breeding standard does not require removing the dewclaws, it is a good idea to let them be because they will help your dog to grasp toys and find traction.

Don’t worry about the possibility of your dog sustaining an injury thanks to the dewclaw because such injuries are extremely rare.