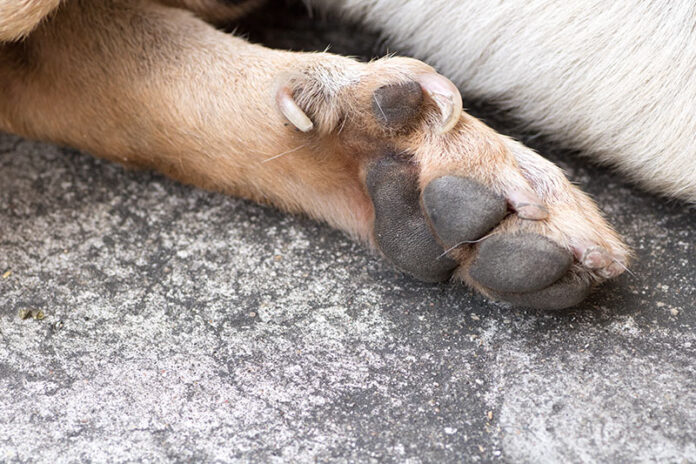 Dogs, like cats, have four toes on their feet. Sometimes, a condition known as polydactyl occurs where one or some limbs feature more than the usual number of toes.

Often, the hind limb is affected but there are breeds that have polydactyl on both front and hind limbs.

Some dogs are bred to have this trait but a majority get it as a result of an autosomal recessive gene present in their DNA.

The polydactyly digit is often located up higher on the dog’s leg (above other toes), so the condition can be noticed right from birth as they give a puppy the appearance of a bog foot.

But which dog breeds have polydactyl feet?

Well, we’ll find out shortly but before then, let’s learn a few basics…

Why Should You Care?

If your dog exhibits polydactyly feet, it implies that he belongs to one of the dog breeds that are known for this trait.

Thus, if you are not sure about your pup’s breed (perhaps you’ve recently adopted one from a rescue center) or he is from a mixed breed parentage, the presence of polydactyly digit can help you narrow down his potential ancestry or give you clues into the potential breeds that are involved in his genetic makeup.

While the polydactyly toes don’t touch the ground when your dog is standing or trotting, they can stabilize his wrist joint when he is moving at high speeds or negotiating sharp turns.

The toes are also used for self-grooming and can help a dog steady objects that he is holding between his paws when lying down.

The biggest problem with this extra toe in dogs is the fact that it is not attached to the paw like the other four toes. In most dog breeds, it is only attached via the skin and muscles—no real bone.

Due to the absence of bone, the toe can get ripped off when a dog is moving, causing a lot of injuries.

Additionally, considering that the extra toe has less contact with the ground, it seldom gets filed down as the dog walks. This means that it can continue to grow and become more embedded into the skin, leading to limping, pain, and may even necessitate amputation of the leg.

However, these toes can be removed surgically before they become a problem or cause complications to your dog.

So, if your dog has front or rear polydactyly toes and having them removed surgically isn’t financially viable to you, consider checking regularly and trimming them down to healthy lengths to prevent potential injuries.

That said, polydactyly toes should only be removed if it is recommended by your vet.

Here’s a list of 15 of the most popular Polydactyl dog breeds.

The Norwegian Lundehund is the number one dog breed that is known for having extra toes. This is because unlike other polydactyl breeds with extra toes on their hind feet, this breed has 5 or 6 toes on all four of his feet. Some have one extra toe on the front feet and six on the hind feet.

The condition came about because of the nature of work the Norwegian Lundehund had to do centuries back. Most days were spent hunting puffin birds which meant climbing rugged rocks in search of them.

To get a good grip on the rocks, this breed developed extra toes. All toes come with extra joints to further help with climbing.

The other common polydactyl dog breed is the Great Pyrenees. Almost all dogs in this breed are born with a dewclaw (meaning an extra toe on the limb).

As a livestock herder, the toes come in handy when gripping and balancing rugged terrain.

Some owners remove the extra toes claiming the dog might hurt himself during play.

However, polydactyl is now a breed standard for this breed. The Great Pyrenees is not allowed to participate in dog sports if he doesn’t have six toes on his hind legs.

Also called Berger de Beauce, this large, French working dog was bred in the 1500s for hunting wild boar but became useful over the years for herding livestock and working as a watchdog.

The breed has a natural instinct to guard and protect and that’s why it is commonly used in protection, rescue, and police work.

It has a double set of hind polydactyl toes, which tend to be quite low down on his leg.

It is believed that the dewclaws distribute his weight evenly, allowing him to walk over ice and snow with ease.

The Akita was bred in northern Japan to hunt and herd. This powerful, independent, and swift canine dispensed his duties with relative ease partly because of the presence of an extra toe of his hind limbs.

Granted, not all Akitas have extra toes on their limbs but a good percentage of them have the trait.

Like the Akita, the Anatolian shepherd is a highly individual dog. He can be left alone for days on end.

Centuries ago, this dog survived on his own hunting small game for food when herding livestock.

His job of looking after sheep made him develop polydactyl symptoms to help him navigate his environment better.

It is not uncommon to buy a Rotty pup only to realize that he has 5, 6, or 7 toes on each back foot. They can present in only the extra limbs or even the front ones.

Sadly, the extra toes need to be removed before a Rottweiler is shown because polydactyl is not considered a breed standard by the AKC.

Luckily, this condition doesn’t affect the quality of life of the Rotty.

Jindos are rare dogs with an Asian origin. They were bred to hunt game for their owners. They can walk, jump, retrieve, climb, and carry prey just to prove their undying loyalty to their master.

Over time, these Korean dogs developed extra toes as a way to become efficient on the hunt.

Also known as the Gos d’Atura, the Catalan Sheepdog has been working with Northeast Spain natives to herd and protect their flocks.

While this lively, active, handsome dog is still used as a flock guardian in the region, he has also become more popular as a family companion.

His polydactyly is rather unique, being a double pair that’s usually joined together.

The Shiba Inu is a thick-haired and beautiful dog from Japan.

While it was developed to flush birds and hunt small game, it is now a domestic pet in the United States and the rest of the world.

Polydactyl is also common with this breed with most dogs having double claws on their hind limbs.

One of the oldest breeds from the Estrela Mountains, this dog is famed in the region for his prowess as a watchdog for homesteads and livestock guardian.

A wonderful farm guard, the Estrela mountain dog is also known to be distrustful towards strangers but typically docile to his master.

The breed may have either single or double polydactyly.

Bred to herd livestock, Aussies had to navigate difficult landscapes to keep a close eye on the herds.

All dogs from this family have front dewclaws. A few also have them on their hind feet.

Despite not touching the ground, the extra claws help with stability and friction when the dog is in motion.

Affectionate, friendly, alert, courage, independent, and aggressive, the Korean Tosa (also known as the Japanese mastiff) is a large dog from Japan.

It is not uncommon to come across Japanese mastiffs with extra toes on their feet.

Like most dogs on this list, they use the toes to run, walk, and climb much faster and more effectively.

This is another French working breed and can be traced back to the 8th century.

Also known as Chien Berger De Brie, they were used to guard off wolves and poachers, but eventually became peaceful working and herding dogs.

Like Beauceron, the Briard has double hind polydactyl toes that are quite low down on his legs.

This ancient breed from the islands of Sao Miguel, Portugal was bred to round up and tame feral animals on the island. This intelligent cattle dog is also famed for his prowess in guarding property and defending their owners.

They are known to be extremely loyal to their owners, protecting them at costs but quite standoffish towards strangers and considerably violent towards other pets and animals.

The last breed to present polydactyl is none other than the large working dog by the name of Saint Bernard.

When you buy a puppy of this breed from a breeder, he might have an extra toe on his hind limb.

Luckily, this trait rarely affects his play and walk, so there’s absolutely no need to get rid of it.

Polydactyl dog breeds may appear abnormal especially to a rookie pet parent but you have absolutely nothing to worry about.

Unless it affects your dog’s walking style, rest easy. Your dog will have a long, healthy life like the rest of other dogs.

Webbed Dog Feet vs. Non-Webbed: Should It Be a Concern When Getting a New Puppy?

12 Best Portable Dog Washers Every Dog Owner Should Have