Home Breeds 12 Dog Breeds that Use Their Paws a Lot 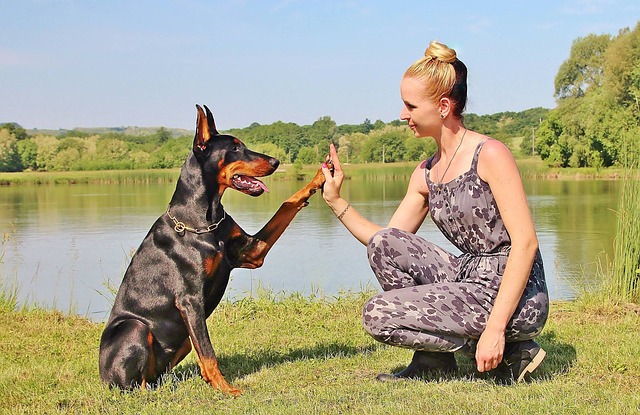 Dogs use paws to communicate. This ranges from seeking attention to asking you for a favor, and even apologizing. Granted, most of them resort to barking, wagging the tail, and growling as the main means of communication. However, there are those that use their paws a little more than the average canine. The behavior can be amusing and concerning in equal measure if you are not used to it. To keep you updated, we’ve compiled 12 dog breeds that are prone to using their paws too much.

The Boxer is a playful, energetic, and bright dog. He is popular for being a loyal and affectionate family pet with a big heart for kids. In addition, he is also famous for his upright posture where he’d stand on his hind legs and try to use his paws like actual human hands. The posture resembles an actual boxer in the ring. He does box other dogs using his paws but often in a friendly manner. Apart from boxing, this breed uses his paws to do a number of other things such as waving, petting, and pawing at his owners.

Huskies are lovely dog breeds with plenty of love and snuggle for the whole family. Although he was once an incredible sled dog, that has since changed, thanks to the domestication of pets. He is now a friendly, sweet, and loyal snuggle buddy. He still loves to work if he’s put to work, which is often hunting. This requires him to use his paws to the maximum. This breed loves to use his paws to do other things such as pawing at you, crossing his arms in a prayer position, kicking the ball with his front paws, and more.

Famous for his outstanding service in the police and military institutions, the German shepherd is a dedicated working dog. His sense of smell and intelligence level is unmatched. Besides detecting bombs and drugs, a GSD also makes for a therapy dog. All these tasks require heavy use of all parts of his body. This breed is adventurous in nature. He always wants to explore his surroundings and discover new things. This sometimes means using his paws to touch things, uncover hidden stuff, explore new toys, catch the Frisbee, and so on.

In ancient days, the Alaskan malamute would spend his days pulling heavy sleds across the massive icy countryside of Alaska. Thanks to his sheer size, strength, and endurance, he would also hunt polar bears and seals. Perhaps it is the skill of hunting that made him touchy but this breed loves to put his paws to work a little too much.

The Labrador retriever is an all-rounded dog. If you want him to just enjoy being pampered at home, he will happily do it. Also, if he is needed in the service dog world, he will jump at the opportunity with his whole heart. He is an excellent search and rescue (SAR) dog mostly in the detection department. As a service animal, using his paws to carry out his responsibilities is inevitable. At home, you will see him retrieving things for you using his paws, giving you a “high five”, pawing at you, petting your shoulders, you name it.

Pros and Cons of Owning a Bluetick Coonhound Lab Mix

The charming Golden retriever, like many dog breeds, communicates in different ways. The most common one is unsurprisingly barking and growling. He also loves to paw on their owners, sometimes more than your average family dog. You might have already noticed this behavior. When you are eating or working, your Goldie will paw on you incessantly. He can’t seem to stop touching your feet and arms when you are feeling down. When he wants you to pet her, she will give you his paw. This breed is a good service dog that has to use his hands to dispense his services.

Pointers also engage their hands more than other breeds to carry out their tasks. For the most part, these dogs were bred to hunt birds. They would point towards prey with their paws. The English Pointer is a great companion for a hunting maniac. He can track prey, point at it, and retrieve. Throughout all the three stages, the paws will be put to maximum use. Since there’s very little hunting that goes on in the home, this breed tends to point at different things of interest around the home. Sometimes he will paw at you to seek your attention, pet other animals for some reason or just use his paws to show you some affection.

Just like the English Pointer, the English Setter is another pointer that uses his paws a little too much. His front paws got used to pointing at prey that he can’t stay for too long without working. When left with chew toys, don’t be surprised if he grabs them in his toys as he chews on them. Rather than using his mouth to connect with other pets (like other normal dogs do), he is more likely to pet them using his paws. Of course, not all English Setters exhibit this behavior but if yours does don’t be too alarmed about it.

This big muscular canine is also notorious for using his paws a lot. If you’ve ever played a game of fetch with him, you have probably realized this about him. Rather than using his teeth to grab onto a toy, he might just put his paws in action. It doesn’t happen often but the Akita sure loves to use his paws. He can also open the tap and drink water using his hands and even twist a doorknob.

The ShibaInu is a beautiful thick-coated dog with cat-like facial features. Apparently, he doesn’t only look like a cat but behaves like one as well. By this we mean he tends to use his paws more than his mates do. When you are cuddling and nibbling something he enjoys, trust him to grab your arm with one paw and steal your food with the other. Things like opening doors, taps, holding onto chew toys are done using the paws too.

As a hunting powerhouse, the Beagle uses his hands to announce the possibility of prey and to catch it. Of course, the nose and the mouth do most of the work but the hands are rarely free through it all. At home, he will work his front paws like a human being would. This includes catching the ball with the paws instead of the mouth and cleaning the face by rubbing his tiny hands all over it.

The final entry on our list is the herding dog that hails from the Land Down Under. The Aussie is certainly a great dog to have at home. He loves to work and lie on the couch with you when he’s tired. To connect with you, he might put his paws on you for long stretches of time. This can be evidence of him showing his dominance – part of his herding instinct or just the need to be close to you.

Is Sheltie Aussie Mix the Right Crossbreed for You?

Dog Breeds that Use Their Paws a Lot: Final Thoughts

To say that using paws excessively is dependent on the breed would be an utter lie. It is more like a personal issue. Training and individual instinct have a lot to do with it as well. However, if your dog falls in any of these breeds, he has a much higher likelihood because of his skills, talents, and abilities.