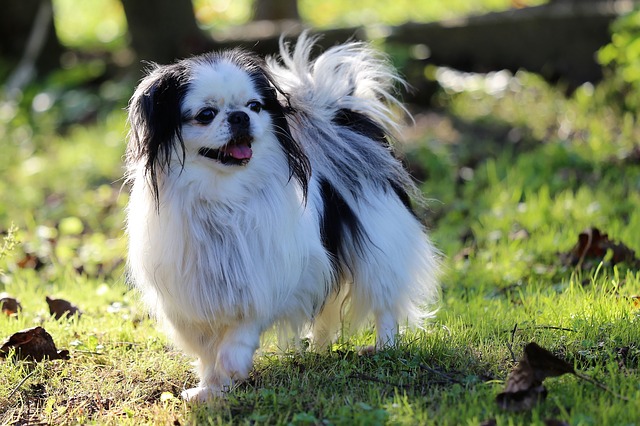 The Japanese Chin is a sensitive, affectionate, and intelligent toy breed with origins in Asia. Measuring only 4-12 pounds, this is your usual lapdog. He’s silly and dignified in equal measure. Naturally clean and independent, this fur-baby makes a great pet for small space living. Thanks to these amazing qualities and more, chin mixes are springing up everywhere these days. Here, we have a list of 12 adorable Japanese Chin mixes.

The most adorable chin hybrid is none other than the Jatzu or the cross between the Chin and Shih Tzu. Both parents are toy breeds hence this is a tiny dog of 8-20 pounds and 11 inches in height. His coat can be fine, straight, thick, or fluffy depending on which parent genes are passed on. As for his temperament, this is a responsive, social, and lively dog. Granted, he gets mischievous when he wants to, but he’s generally loving and loyal to his owners. Pleasing him is easy. All you have to do is make him the center of attention as much as possible.

Measuring 7-20 pounds, the Japug is another beautiful and tiny chin mix. His coat is short and features different colors such as brown, black, white, silver, and fawn. With a short stubby physique, this designer dog borrows his looks from the pug side of the family. He’s a true sweetheart who loves his owners deeply. His calm nature is very attractive to apartment dwellers and homeowners who don’t fancy noisy dogs. He’s also low-maintenance, low-key, and simply easy-going.

The Chineranian is a stylish lapdog with a well-balanced nature and a beautiful fluffy coat. This is certainly one of the cutest chin mixes out there. The weight ranges between 7 and 10 pounds with a height of 8-11 inches. He is lovely, outgoing, affectionate, and friendly. Because he loves human company so much, this hybrid dog doesn’t do well when left alone for too long. Separation anxiety causes him to become destructive around the house. He is also very vocal; always howling and barking at anyone near the door.

When you mix the Japanese Chin and the Beagle you get a small intelligent pup called the Beagle Chin. With a broad round head, a square muzzle, large brown eyes, and a two-layer coat, this hybrid is a beauty to behold. His loving temperament is also mind-blowing. He makes an excellent companion for adults, kids, and even other pets. Grooming him is also pretty easy. Both mom and dad are modest shedders, so brushing the coat on a weekly basis should keep him looking neat and tidy.

The Chin-wa is not a very strange designer dog. It is a favorite in many American homes primarily because of his playful, mischievous, and loving nature. This toy breed will put a smile on your face every time he cuddles up in your lap and refuses to leave. His straight coat doesn’t shed as much. Brushing once a week is sufficient. He loves to play but does not require plenty of physical activity. The only downside of owning one is that he can be pretty stubborn especially during training. You have to be authoritative to make him do what you want him to do.

The Chin can be mated with the Bichon Frise to give Ja-Chon. He may have a long curly coat or a short and dense one depending on which family he leans towards. Thanks to his size and calm nature, he is great for apartment living. Exercise is minimal—a walk around the block after work is enough for him. He sheds very little meaning he is low-maintenance. As for his temperament, the Ja-Chon is a very loving and sweet lapdog. He is kid-friendly, entertaining, eager to please, independent sometimes, and easy to train.

The Cavalier King Spaniel and the Japanese Chin have a striking resemblance both in weight, height, and overall appearance. The Cava-Chin, their offspring, weighs 14-18 pounds and stands at a height of 8-12 inches. Like mum and dad, he has medium to long hair that can be wavy or curly. He is wide-eyed with small V-shaped ears. This hybrid is not only beautiful but good-tempered as well. He’s lively, energetic, and obedient. He enjoys spending time with his owners and doesn’t mind being the center of attention round the clock. Because of that, separation anxiety is inevitable if left alone for hours on end.

Here’s another adorable chin mix whose parents are the Boston Terrier and the Japanese Chin. On average, this designer dog weighs 10-14 inches and 10-15 inches in height. He is tiny and well-formed with a refined square appearance like that of the Boston Terrier. His muzzle is short and his ears triangular in shape. Overall, the Boston Chin is a sweet little bundle of joy. His intelligence, sensitivity, and independence make him a charming lapdog. He learns quickly and exudes good manners. He’s always happy, enthusiastic, active, and reliable.

The Japillon is a cute hybrid between the Japanese Chin and the Papillion. With its lovable disposition and eagerness to please, the Japillon is a remarkable companion. His features include round black eyes, a black nose, floppy ears, long fur, and a furry tail. He is friendly with all family members including adults, kids, and other pets. Thanks to his possessive side, this mix is a wonderful guard dog. When he sees a stranger approaching, he’s quick to bark and alert his owners.

Also known as the Chindoodle, Chinpoo, or Doodlechin, the Poochin is an adorable little ball of sunshine. He’s only 3-13 pounds and 7-15 inches tall making him a characteristic lapdog. Loyalty is his second name. No doubt this designer dog will do anything in his power to please you. Whether you live in an apartment or a big house with a yard, the Chinpoo will be happy regardless. He’s suited for every family setting including singles, people with small families, and those with large ones.

How to Give Your Poodle a Standard Poodle Puppy Cut At Home: Quick DIY Guide

The Chin Pekingese mix is an affectionate yet mischievous little toy dog whose parents originated from China. He is a brave regal-looking breed. The eyes are bigger and feature a variety of colors such as dark brown and back. The coat can be soft and silky or dense and double-layered. Either way, his hair is long and soft. His character is that of a jovial alert dog that adores being affectionate with everybody. He doesn’t particularly love sharing a roof with other pets but with early and proper socialization, he will peacefully co-exist with them.

Finally, the Chin-Ocker, a mix between the Japanese Chin and the Cocker Spaniel is eye-catchy and sweet-natured. Both folks are friendly and affectionate. They also score high in the looks department. As a result, owning a Chin-Ocker means saying yes to countless snuggles and kisses. He’s adaptable and doesn’t complain when put in a tiny apartment.

Japanese Chin hybrids are beautiful dogs with some of the best companionship qualities. Most of them love deeply without holding anything back. If you are looking for a perfect little companion, try a Chin hybrid. You won’t be disappointed.