Home Breeds 10 Dogs That Looks Like a Rottweiler but Skinny 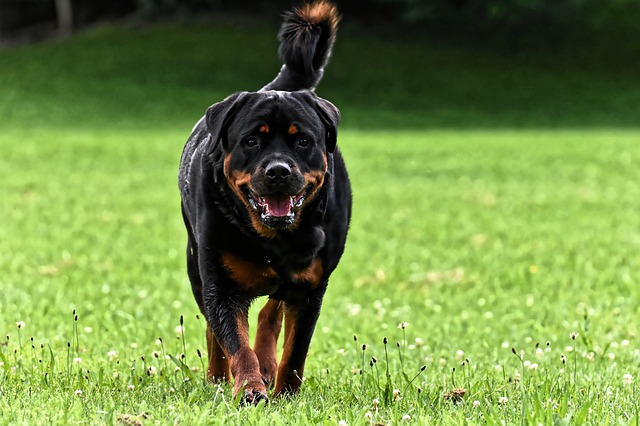 Muscular, handsome, and jowly…that’s a Rottweiler. This breed may have an intimidating face but it is one of the most amazing to own.

For one, Rotties are smart. They must think hard before executing an action.

They are also some of the deeply devoted pets. While they appear aggressive and frightening, it is these very qualities that make them excellent guard dogs.

They are also great lap dogs (yes, despite their massive sizes), barkless, affectionate, and athletic.

A Rottweiler is truly phenomenal. For those of us that love the breed but cannot handle the size of some of the challenges of owning one, you can consider another breed that looks like a Rottie but is skinnier.

Here, we have outlined 10 such breeds.

With black and tan colorings on the coat and about 12 pounds of body weight, the Manchester terrier is a smaller version of the Rottie.

If you love your Rottweiler but don’t have enough space to accommodate one, this one is the dog for you.

The breed is as energetic and fast as the Rottie—perhaps even more.

Despite being small, Manchester terriers have a lot of energy in them. They will play with your kids, guard your home, and love on everyone a home.

The only downside to owning them is that they love to bark. If being woken up in the middle of the night by barking is a major turn-off for you, don’t get this beauty.

Here’s another small breed that can be easily mistaken as a mini-Rottie.

Granted, this one has cropped ears and looks more like the Doberman but he also resembles the Rottie in many ways.

As a small breed, Miniature Pinschers weigh only 8-11 pounds and come in several colors.

The black and tan version has the same markings as a Rottweiler.

AKC refers to the breed as the “King of toys”, thanks to his fearless and self-assured attitude.

His signature ‘hackney’ gait contributes to his nickname in more ways than one.

The Doberman Pinscher stands at the same height as the Rottweiler.

He also comes in the same black and tan coat colors.

Because of this, many people easily misidentify him as the Rottie.

However, the Dobbie is much leaner and muscular, making him the slimmer version of the Rottweiler.

Additionally, most Dobermans in the United States and other parts of the world have docked ears and tails making them different from Rotties.

Those with natural ears will look like Rottweilers compared to cropped ones.

Both breeds are equally intelligent, courageous, and loyal.

They belong in the working group of dogs and make great guard dogs at home.

Although Beaucerons don’t have the same chest and face markings as Rotties, they have black and tan colors on their skins. They also come with floppy ears and square muzzles.

Perhaps the biggest difference between the two breeds is that Beaucerons are smaller in size than Rottweilers.

Beaucerons also have a prominent rustic effect on their bodies.

As loving pets, they are protective, alert, loyal, and affectionate.

As a slightly rare breed, the Hovawart is not very popular.

The best description of this doggie is a cross between a Rottweiler and a German shepherd.

He has a cute bushy tail, mahogany points, and short droopy ears.

As a result, you might imagine him as a long-haired Rottie.

Hovawarts originated from Germany and have been in existence since the12th century.

They were originally bred to herd livestock but these days they make great pets at home.

Trust them to watch over the family and be affectionate with all.

The Boxer and the Rottweiler don’t necessarily look alike but they both have the same square shape.

Their bodies are heavy-boned, the necks well-muscled and the muzzles short and broad.

Both breeds also have hanging pendant ears of moderate sizes.

The Boxer weighs 55-80 pounds making him much smaller and skinnier than the Rottie.

With immense strength and intimidating looks, he can appear unfriendly but once you get to learn more about him, you will meet a sweet pooch.

He is affectionate, loves people, and has a playful and enthusiastic personality.

The Australian Kelpie is another dog breed that has some striking physical features with the Rottie.

This is especially true with black and tan Kelpies. Other accepted colors include red, solid black, chocolate, fawn, and smokey blue.

They have happy faces and love to be put to work, thanks to a long history of herding livestock.

German Pinschers are small to medium-sized dog breeds that are athletic, sturdy, and extremely energetic.

This old breed is part of the Pinscher family of dogs. It was developed are a multitalented working breed.

German Pinschers also come in multiple colors, one of which is black and tan.

The tan markings resemble those of Rottweilers. However, these dogs are leaner and smaller than the Rottie.

Both breeds also share a lot in the way of temperaments. They are intelligent and eager to obey commands.

However, they must be trained by the right person. They can be headstrong and stubborn.

If you are not assertive, firm, and consistent, you will have a hard time having a handle on your doggie.

Like the Boxer above, the Cane Corso has a shape that is equivalent to that of a Rottweiler.

If you look at a black and tan member of the breed beside a Rottie up close, you will quickly realize their resemblances.

Both have hanging or cropped ears, large heads, and shortened muzzles. They are also compact and muscular with an efficient gait.

A Cane Corso is bold, athletic, and vibrant weighing anywhere from 85 and 110 pounds. This makes him slightly smaller than the Rottie.

Looks aside, Corsos are loyal, intelligent, versatile, and eager to please.

Despite being willful and assertive, they stay loyal to those they love.

They are calm, stable, quiet, and trainable making them great family pets.

Your kid will love playing fetch or running around with the doggie at home.

What Is It Like To Own A Cane Corso And Presa Canario Mix?

The Pitbull terrier is always placed in the same category of aggressive dog breeds as the Rottie.

Some countries have actually banned both breeds for the safety of their citizens.

Well, those that understand Pitbulls and Rottweilers know that these dogs are wonderful—to say the least.

Granted, they are remarkable guarding dogs with intimidating looks and fierce qualities but they are also some of the most charming.

As for looks, both dogs have the same head structure, ear position, ratio of the muzzle, and back skull. The Pitbull, on the other hand, has an athletic cat-like gait that sets it apart from the Rottweiler. Additionally, the Pittie is much smaller (at only 30-60 pounds).

Want a dog that is skinnier than a Rottweiler but has the same physical characteristics?

You have 10 options to choose from. Some have the same skin colors, others the same build, and a few the temperament of your Rottie. Make the right choice.