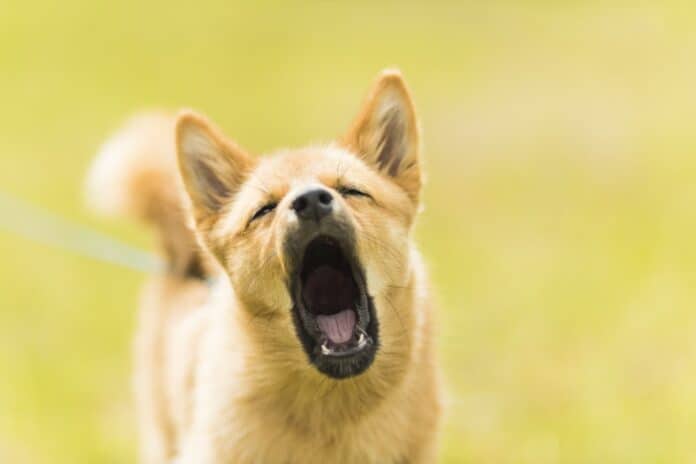 When dogs want to communicate with other dogs and with humans, they bark.

These barks are usually made in different situations and they are almost always in response to a change in the internal or external environment.

For instance, if your dog gets uncomfortable for whatever reason, he will most likely start barking.

Even breeds like the Alaskan Malamutes and Siberian Huskies that are known for not barking will still bark in some situations.

As a dog owner, it is a good idea to know when and why your dog barks because this is often their way of communicating.

Also, different dog breeds bark differently. Some howl, others yapp, and others bark.

In today’s post, we will zero in on the dog breeds that have high-pitched barks.

Some of the breeds bark a lot while others seldom bark but all of them have one thing in common: their high-pitched barks.

Chihuahuas are loved for their cuteness, playfulness, and how protective they are.

But they are also known for their high-pitched barks that some may even consider annoying.

This is a high-energy dog breed and they have to be kept busy all day.

If you don’t keep them engaged, they will convert the energy into a high-pitched bark that can get you in bad books with your neighbors.

But their charming personality and beautiful fur coat still make them irresistible.

This dog breed will keep barking in the high-pitched tone until you figure out what they are trying to communicate.

For instance, if they want to go outside, they will keep barking until they are let out.

The bloodhound is considered to be the most laid-back breed in the hound family of dogs.

They are therefore great pets for the family and you can easily go with them to an official setting.

These dogs have a sensitive sense of smell and are great for tracing missing persons.

When the bloodhound is left alone, he will start howling at a high pitch.

The howls are loud and mournful – almost like those of the Basset Hound.

Alaskan Malamutes do not bark like most dogs. They howl instead.

These high-pitched howls can be triggered by almost anything—the sound of a siren, the sound of other dogs barking, or just for no reason at all.

If you have more than one, they will start and finish howling together which will make the howling even more amplified.

These dogs were originally used to pull sleds through the frozen Alaskan mountains.

They are therefore high-energy dogs and you may want to keep them active to try to keep the howling at a minimum.

Good luck hearing yourself thinking once your Dachshund starts barking.

This dog breed might be small but they are spirited and love unleashing their high-pitched barking at everything and everyone.

To make the matters worse, Dachshunds tend to bark for a long time especially if they are frustrated, excited, or bored.

Even though these dogs are pretty small, they were bred for hunting moles and other small animals.

When you keep him as a pet, you have to keep him busy to use up all his daily energy or they will channel the unused energy into those annoying high-pitched barks.

Bassets are laid-back and they make for great family pets.

The only dog that has a better sense of smell than the Basset Hound is the bloodhound.

Even though these are not guard dogs, their insistent barks at noises and strangers can alert you of danger.

Bassets are also known to howl in a high-pitched tone when communicating to other dogs and humans.

If the howl was triggered by a sound of a siren or another dog, they will stop once the sound stops.

Otherwise, you will have to figure out what they are trying to communicate.

Siberian Huskies are great house pets because they seldom bark.

With a Siberian Husky, you won’t have to worry about being woken up to loud and intermittent barks throughout the night.

This is why huskies aren’t the best of guard dogs because they may not even bark at strangers.

However, when they bark, it is usually a shrieking howl that can be disturbing to you and your neighbors.

If your husky starts howling, it’s almost always because he is bored and wants to play.

The beagle is primarily used for hunting but it is a wonderful companion and can therefore be a great family pet too.

Beagles love company because they hunt in packs, so you may want to spend a lot of time with them.

Beagles bark and howl a lot when on a hunt and they instinctively unleash the high-pitched bark when they get very close to their target.

Even though they will remain mostly quiet at home, a dog passing by or a stranger getting in the compound could trigger them to start barking.

Other triggers include boredom, a desire to get out, hunger, or when they noticing something or someone unusual.

The Pomeranian is a tiny dog breed that is loved for its awesome coat and cute smiley face.

It also has a vivacious personality and is one of the most famous toy breeds.

Even though small-bodied, this dog breed is known to yapp in a very high pitch under certain conditions.

They yapp as a warning that there is impending danger, when they are in any form of distress, or when craving for attention.

The Pomeranian barks can be relentless and it is a good idea to find out the issue quickly or you will be in for a long barking treat.

The Miniature schnauzer is the smallest breed of the schnauzer family of dogs.

These dogs are bright and friendly and their portability makes them very popular pets.

They also get along easily with other pets and with the kids.

They are however notorious for their high-pitched barks which can be annoying if left unchecked.

These dogs will bark at strangers and are therefore make good guard dogs.

With some proper training, the miniature schnauzer will learn to bark less and the noise will be brought down to manageable levels.

For the most part, smaller dogs tend to have higher-pitched barks than the bigger breeds.

It’s almost like they make up for their lack of size in the high-pitched barks.

But this is not always the case as some large breeds have a high-pitched bark too.

It’s also worth noting that even breeds that may not traditionally bark in a high pitch can still do so under certain circumstances.

For instance, almost all dogs will wail when they are in pain.

If you own a dog that is known for its high-pitched barking, you may want to train it to bark only when necessary to avoid being a nuisance.

Do Plott Hounds Bark a Lot?

Do Dalmatians Bark a Lot?