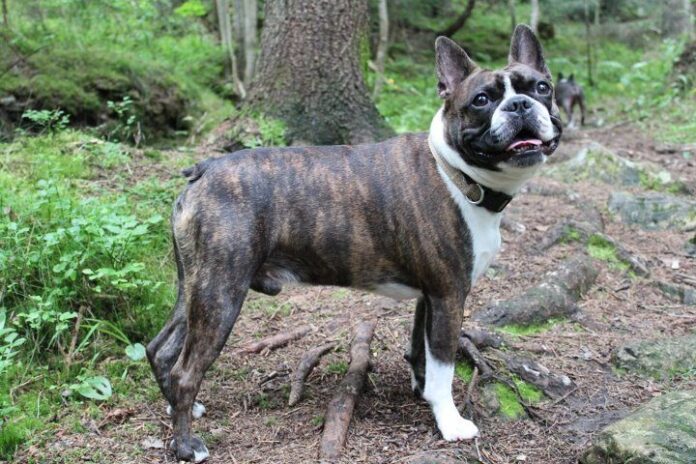 The Boston terrier or “American Gentleman” is a smooth-coated, well-balanced, and highly-intelligent dog. This toy breed derives his nickname from his shiny coat which makes him appear as though he’s wearing a tuxedo. He is social, loyal, and great around kids and other pets. Ranked as the 21st most popular breed in America by AKC, this breed has warmed his way into American homes.

When it comes to Boston terriers, there are a number of coat color variations to choose from. The most common one is black and white followed by seal and white. Others include red, blue, and brown. The brindle color pattern is not as popular as the seal and black/white colors. It is however an elegant color to consider. This post is dedicated to exposing this unique color pattern of the American gentleman. Without further ado, here are the most important facts you should know about the brindle Boston terrier.

The Color is Caused By Pigmentation

Brindle, loosely termed as “tiger stripping” is a coat pattern featured by a number of dog breeds including Great Danes, Dachshunds, Boxers, French Bulldogs, and Akitas. Most people confuse brindle Boston terriers for boxers but the two breeds are totally different from each other. Typically, a brindle Boston terrier dog has a brown base color with black hairs. So, rather than the usual black parts in a black Boston terrier, you’ll see brindle instead. The pattern may have dark or light stripes. The extent of the color and the actual pattern varies from dog to dog depending on the recessive gene present. The gene spreads through the pool fairly easily causing the bridling.

Essentially, there are different sections (or loci) along a dog’s DNA strand that controls the color pattern. They are often referred to as gene series and denoted by letters. The mutation for the brindle coat pattern is located at the K locus, which contains three different gene variations (also referred to as alleles). One allele makes the dog all black, the other defaults to other alleles, and the last one makes the dog brindle. So, the brindle pattern is essentially one of the recessive genes on the K locus—it is recessive to the black gene but dominant over the default coloration (or yellow). The science is a little complicated but this is the short of it.

Not all tiger-striped Boston terriers look the same. The common pattern is dark stripes over a tan or brown coat. The second type, the reverse brindle, is where light brown stripes appear on a dark coat. A dog can have minimal bridling or a large number of the stripes with very little of the dark showing at all. The former would unsurprisingly be a minimum bridle and the latter, a maximum brindle. In addition, you can have the base and hair color having a very close pigment or being very distinct from each other.

Finally, the brindling can occupy the entire coat or take up specific patches, mostly the backside of the dog. The outcome of the brindle heavily depends on the presence (or absence) of the agouti gene. The gene is inherited meaning the parents of a brindle puppy have are a huge determining factor in his appearance.

Despite recognizing the Boston Terrier breed in 1893, the American Kennel Club (AKC) doesn’t rank all color variations as breed standards. Typically, for a black and white Boston terrier breed to be accepted by AKC, it has to have some white patches on his body. This can be around the neck, the muzzle, or the forelegs to the hocks. This goes for the seal color pattern as well.

From this information, it is clear that a solid brindle Boston terrier is disqualified by the AKC. The board only accepts brindles with a black nose and brown eyes. Disqualified Boston terrier color patterns include solid seal, solid brindle, liver, brown, fawn, solid white, solid black, blue (gray), champagne (pale red) and brown.

Registering your dog with AKC offers a number of perks. For one, you obtain a registration certificate with AKC that allows you to participate in dog sports. If you are into this kind of life, it might be a great idea to get a puppy that can easily be registered. The 30-day AKC Pet Insurance trial for newly registered puppies is also a great benefit. As a bonus service, you will enjoy a complimentary on your first visit to the vet.

Having said this, you can go ahead and own an unregistered brindle Boston terrier. No one will come for you. There are just a few luxuries you won’t be able to access for your pup but that’s all. The most important thing is to get the right health information from the breeder about the dog. If you train him properly and early enough, you will be rewarded with a charming and loving pet.

Generally, Boston terriers are loving and cheerful dogs, and are always recommended for single people, couples, or families who want a pet that’s easy to care for. While some Boston terriers can be overprotective of their owners, most of them are sociable and accommodative. They are also good with children though it is always recommended to supervise children around any dog.

Pro Tip: When purchasing a brindle Boston terrier puppy, strive to meet his mother—and father if possible. This will allow you to gauge their temperaments for yourself.

May Cost More Than Other Color Patterns

Boston Terrier puppies, in general, are affordable than most breeds available today. For about $500-1000, you can own a black and white or seal terrier. If you choose to rescue one instead, you will pay much less. The only qualification is that your home has to be adoption-friendly.

Brindle Boston terriers are unique and beautiful. As a result, they attract plenty of attention from aspiring pet parents. This alone pushes the price over the roof. In addition, some breeders consider the color variation “rare” claiming it is not easy to come by. However, brindles are pretty common. Often, these breeders are businessmen looking to take advantage of unsuspecting clients to make a killing. Despite paying a fortune for their brindle Boston terrier puppies, most people that go this route also run the risk of buying a puppy with very little health information. Although a little expensive than the standard color of Boston terriers, the brindles shouldn’t cost an arm and a leg.

The Brindle color pattern, in itself, doesn’t cause any health issues in a dog. However, when it is mixed with other coat color genes, it can cause a dog to be susceptible to certain health conditions. A good example is the merle gene which has been known to cause eye problems in canines. These include:

Since Boston Terriers are brachycephalic breeds (have short heads), they are also prone to certain respiratory issues, one of the most worrying being the predisposition to heat exhaustion or overheating. Always pay close attention to your brindle Boston terrier when he is outdoors, especially on hot days. Provide him with sufficient shade or keep him indoors during warm days. You should also ensure that he is well hydrated during hot days.

In addition to eye problems and respiratory issues, some brindles are also predisposed to deafness. Then, there are the usual health concerns surrounding the Boston terrier breed including bacterial and viral infections, dental disease, obesity, patella, and parasites. A breeder should be able to test a dog for all these issues before handing it over to you. It is therefore important to buy a puppy from a reliable breeder to avoid problems in the future.

Routine preventive care is significant for the health and longevity of any dog breed. So, make an appointment with a local vet immediately you bring your bindle Boston terrier puppy home. A vet will help you plan for the necessary treatments and appointments like vaccinations, deworming, and spaying.

The brindle Boston terrier dog scores highly in the looks department. The pattern is just exotic and eye-catching. Compared to a real tiger, a brindle dog features a subtle coat with an irregular, blended, and sophisticated pattern. Like any other Boston terrier, a brindle comes with a silky, short-haired coat that you can run your fingers through for ages. His overall square appearance with a balanced small body makes him an insanely breathtaking dog to watch. Don’t be surprised if your dog takes over all your Instagram feeds—it happens to a majority of pet parents! The brindle is also a conversation-starter around the table.

Pro Tip: The degree of stripping and contrast vary from one dog to another. So, if you are looking for a brindle Boston terrier, you should not only choose a dog that displays the trait, but one that expresses the trail well.

All Boston terriers come with a short, smooth coat. A brindle terrier is no exception. Despite having a different color and pattern, the coat sheds very little and stays neat on most days. Of course, it needs occasional brushing to ensure the “tuxedo effect” is maintained. Brushing also helps remove broken or damaged hair before they fall out on your floor or couch. A vacuum cleaner is also essential to keep any loose hair at bay, especially during shedding season.

Apart from the coat, you should look after your pup’s ears, nails, and teeth. Trim your Boston terrier’s nails regularly and check his ears regularly for wax buildup and potential infectious debris. Brushing your bindle Boston terrier’s teeth once in a while will also go a long way in promoting good oral health.

Boston Terriers can be picky eaters because some of them tend to have sensitive stomachs and are prone to gas. However, once you figure the foods that they like and what agrees with their digestive systems, feeding them is a breeze.

Like other brachycephalic breeds, your brindle Boston terrier is susceptible to obesity. So, ensure that you keep him at a healthy weight throughout his life. This may be difficult if your Brindle furbaby loves certain types of foods, but be vigilant. Your vet can help you determine your pup’s ideal weight and guide you in choosing the best foods for him and how to feed him the right amount.

There it is – all the facts you need to know before owning a brindle Boston terrier. It is worth saying that all the other great things of Boston terriers including silliness and playfulness are very much present in this beautiful tiger dog. So, by owning a brindle, you get a dog that is easy on the eyes and possesses all the great temperaments and character traits of a typical American Gentleman. The trick is to use the right breeder who will convey all the health information of the puppy without holding anything back.

Related Post: What You Should Know About Reverse Brindle Pitbulls