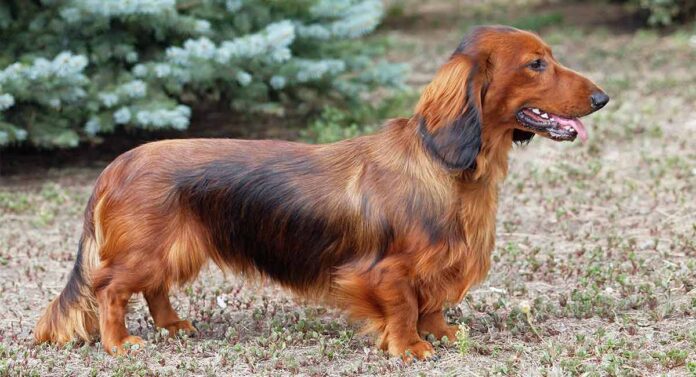 Unless you participate in the canine show business or spend hours examining the conformation of dogs, you may have never looked at your dog’s chest closely.

Perhaps the only time you have taken a measurement of the chest is when purchasing a harness for him.

Well, apparently there’s more to the shape of a dog’s chest than meets the eye.

It can give you a lot of information that is crucial to the overall health of the pooch.

Today, we will take a look at barrel-chested dogs and associated problems.

What Is A Barrel-Chested Dog?

As the name suggests, this is a canine with a chest that looks like a barrel. He comes with a ‘heavy’ chest and a deep ribcage.

Many people confuse the barrel-chested with deep-chested but the two mean different things.

A deep-chested dog has a narrower chest that goes below the dog’s elbows.

Examples include Dobermans, Irish Wolfhounds, and Dachshunds. A barrel chest is broader and round-shaped.

Not to worry you but a dog with a deep-chest may suffer from a condition called Gastric Dilatation-Volvulus (GDV) or bloat.

In simple terms, bloat is when the stomach twists or goes through torsion.

Essentially, this happens when the stomach fills up with air, which puts a lot of pressure on vital organs and the diaphragm.

This cuts down blood supply to other tissues and can cause shock.

A large barrel-shaped dog is prone to suffering from bloat because the chest gives room for the stomach to twist and move.

Bloat is a deadly condition that requires an emergency trip to the vet.

Even after treatment, over 40% of dogs don’t make it.

This medium-sized, foxy-faced beauty features a square and sturdy body with pointed ears, a plumed tail that always points to the sky, and an abundant coat.

He also has striking features as other spitz dogs including Samoyeds and Pomeranians.

The Keeshond is naturally endowed with a barrel and deep chest. That combination can be a disadvantage, especially for large dogs.

Lucky for him, he is not big and thus doesn’t suffer from bloat.

The breast bone is a great and prominent feature in Dachshunds.

Typically, this breed comes with a long barrel-shaped chest to be able to power his deep, loud bark.

When you hear your Dachshund bark, you would think that it’s a big canine.

The large chest also helps the dog on the hunt, especially when digging underground for small game.

The Labrador retriever has a short and stubby head that is proportionate to the head.

The skull is broad and keeps with the working nature of the lab.

With it, he can easily navigate impediments without injuring himself.

The ribs are well sprung and the chest wide and round, extending out from the spinal cord and curving down to the stomach.

It is not uncommon to come across labs with deep, narrow chests but this is not the breed standard.

Pros and Cons of Owning a Bluetick Coonhound Lab Mix

One of the concerns of any German Shepherd Dog (GSD) parent is bloat.

See, this breed is designed with a moderately broad chest that hangs low.

Because of this, it is easy for the stomach to twist and turn on itself.

If you own a GSD, always be on the lookout for bloat.

Take all the necessary measures to ensure your baby stays safe especially after meals.

The Rottweiler is a strong, muscular dog that was bred to drive livestock to the market and pull carts for butchers.

These tasks require a large dose of strength and tenacity.

No doubt this canine is brave, confident, and tenacious.

Sadly, he is a large barrel-chested dog which means he is predisposed to bloat.

The bulldog is a small sweet dog with a laid-back attitude.

If you are looking for a dog that doesn’t require long daily walks and intense play at the yard, this is the one to go for.

He doesn’t mind sleeping all day as long as he has enough food and water.

Even with a shallow wide chest, your bulldog is spared from GSV, thanks to his petite size.

The bulldog and the pug look similar in more ways than one.

Both are small-sized and have folds and wrinkles on their faces.

In addition, the two canine breeds have barrel chests that are easily recognizable.

When you stand in front of a pug, you should be able to see his straight, sturdy feet that connect to his broad shoulders and wide barrel chest.

The American Pitbull terrier was created to carry out heavy tasks.

A narrow chest does not offer the stability needed when working.

It does not transfer air as effectively as a barrel-shaped, deep chest would.

In addition, it can be driven sideways when the dog is involved in a fight particularly when wrestling at the shoulder.

A broad shoulder, on the other hand, makes the dog agile and stable.

A Great Dane is an enormous dog with a gentle spirit.

For this reason, he is commonly referred to as a ‘gentle giant’.

He is easy to groom and train, good for first-time owners, and has strong loyal tendencies.

Unfortunately, he has a huge barrel chest and can have bloat as they run or play.

From their snuggle bug tendencies to silly antics, Boxers have stolen many American hearts.

They are now one of the most favorite breeds in the United States.

While many people love Boxers for their droopy jowls and wrinkly faces, their great personalities make it easy to fall in love with them.

They are clever, playful, patient, athletic, and very protective.

As for his build, the breed is athletic-looking and barrel-chested.

A barrel chest dog comes with the possibility of developing bloat. However, not all of them suffer the condition.

If you have a small breed, he is totally safe.

Even with a massive breed, you can exercise caution to avoid the issue altogether.

Serve small frequent meals, slow down the dog’s eating, and don’t take the dog on walks immediately after meals.