Home FAQs How Often Should a Chihuahua Poop? 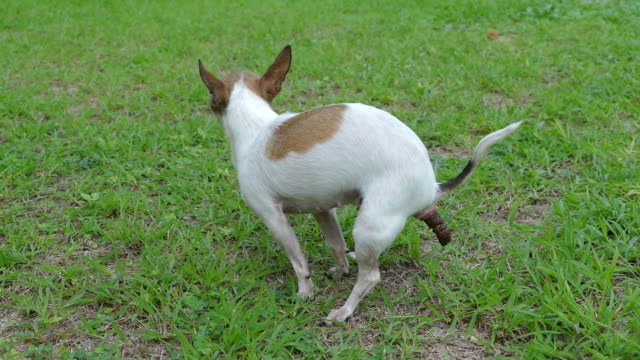 From having long lifespans and playful characters to being smart and easy to train, there are plenty of reasons to love a Chihuahua.

If you have a Chi at home, you can agree that he is truly a wonderful addition to the family. He deserves all your love, attention, and affection.

To best care for him, you have to stay on top of everything about him, including how he poops.

Tracking your dog’s poop schedule and patterns comes with the territory of pet parenting. His waste can tell you a whole lot about his health or lack thereof.

So just how often should a Chihuahua poop? What is considered normal?

What Goes In Comes Out

You don’t need an expert to tell you that the amount and quality you feed to your Chi has a direct impact on his defecating habits.

If you overfeed him, don’t be shocked if he goes up to 10 times in a single day. More food means the digestive system stays busy and thus more release of waste.

Besides the amount of food given, the actual quality of the food also affects the number of times your Chi poops.

If he eats foods with low nutritional value, his tummy will be full faster and will need to go more often. Similarly, if he eats lots of fiber-rich meals, he will also want to use the toilet more than you’d expect.

Do you have a Chi puppy who poops 6 times a day despite the amount of food consumed? That’s because puppies eliminate more often than adult dogs.

It has everything to do with metabolism. A young pooch has a speedy metabolism and needs to relieve themselves frequently. As he grows older, things begin to slow down and the number of eliminations drops accordingly.

How Many Times Should A Chi Poop Per Day?

On average, a normal Chihuahua on a healthy diet should poop 2-3 times a day. This is a broad perspective but as we’ve seen, the frequency depends on a number of factors.

Don’t freak out if your boy goes 5 times or brings the number down to one. As long as his diet is nutrient-dense and appropriately apportioned, everything is fine.

If the poop goes more than five times a day, check your pup’s diet. Reduce his portions a little and get rid of things like grains and dairy.

The frequency should come down a bit. If not, check with your vet but don’t fall into the temptation of cutting down his portions too much.

Related Post: When Should You Switch A Puppy to 2 Meals A Day?

While a normal Chihuahua that defecates out of the average range can be healthy and fine, the frequency can also signify trouble.

If the rate is out of whack and you have reason to believe that your pooch is constipated, act immediately.

Some of the common constipation signs among Chihuahuas include difficulty eliminating, too frequent poop sessions (after every 20-60 minutes), and hard stools that look like pellets.

Normal Chi poop should look like a thick paste. Pick it up if you can and hold it up in the air. It should remain glued together before little pieces of it come off.

Anything less than this means the dog has an issue somewhere. This sounds strange and uncomfortable for many pet owners but for those that love and want the best for their dog, this is a piece of cake.

Constipation in Chihuahuas can be caused by a number of things. The main one is inadequate water intake.

Granted, a Chi doesn’t need massive amounts of water but he can be dehydrated if he doesn’t take enough. This is especially true if his activity level is high.

Speaking of exercise, a Chi with minimal exercise can also get constipated. This is because food takes longer to pass through the large intestine and hence less water is extracted. The result is hard stools.

Stress is also a cause of digestive issues among Chihuahua.

Finally, any change in the diet can also lead to constipation. Some of the most notorious foods include fatty red meat as it contains more fiber protein than white meat. The fiber is too much for the Chi to digest. Dairy products like cheese also tend to upset many stomachs in canines.

If the poop is too loose and too frequent, it could also indicate diarrhea. Green, orange, or gray poop can indicate problems in the gut, liver, pancreas, and gall bladder.

Whether the dog has constipation, diarrhea, or any other issue, he needs immediate treatment. Things can go south in a flash. If you notice any of the aforementioned symptoms, don’t take any chances.

How Much Pumpkin Should You Give a Dog For Constipation?

How Much Yogurt Should You Give a Dog With Diarrhea?

So, how often should a Chihuahua poop?

2-3 times is the average range for healthy dogs.

But anything from 1-5 times is still pretty much normal. As long as your pup eats his portions of quality nutrient-dense foods, don’t panic when he eliminates more or less than expected.

Of course, if his poop tells a different story, call your vet fast.

How to Make a Dog Poop with a Match (Does It Work And Is it Safe?)

12 Best Self Bagging Pooper Scooper to Buy for Your Dog