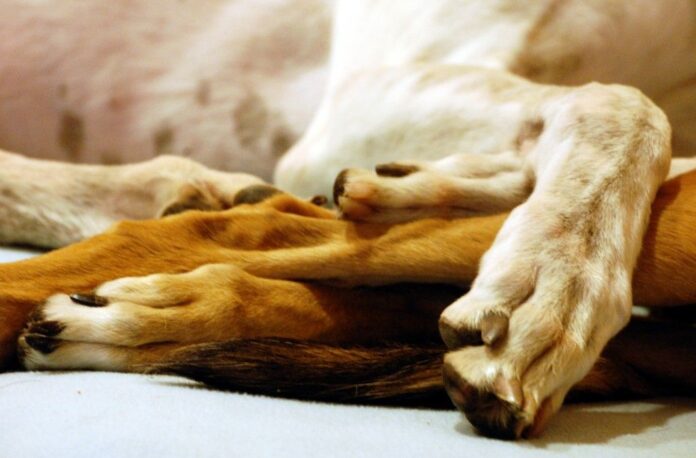 While most of the human weight is concentrated in their heels when walking, dogs step with their toes.

Because of being placed in different environments, the toes have adapted to make life bearable for them.

When you say that your dog is hare-footed, it means that his middle toes are longer compared to the outer ones—just like a hare’s feet.

Basically, the middle toes arch less, making them appear to be a bit elongated than the outer ones.

Dogs with hare feet need lots of energy to raise their paws but they boost their speed significantly.

So, dog breeds with hare feet tend to have quick bursts of speed or the ability to get a quick start from resting positions.

Which dog breeds have hare feet?

Well, here is a quick overview of the top 10 most popular dog breeds with hare feet.

The Greyhound is one dog with incredible speed.

Apparently, when he’s running at maximum speed, his feet only touch the ground a quarter of the time. His paws have a lot to do with that.

The elongated, compact toes give him maximum leverage and allow him to take off and add momentum in the least time possible.

This breed was bred to hunt small and medium games including hare, deer, and foxes.

He just had to outrun them if he wanted to be successful at the hunt.

If you have ever attended a dog agility event, you have probably seen how fast a whippet can run.

He can accelerate to a speed of up to 35 miles per hour in a few minutes of launching.

After chasing the small game for centuries, this dog developed hare feet to help him on the hunt.

Playful and energetic, the Bedlington terrier is a real bundle of joy.

He loves demanding all the attention at home but returns the favor by being a good watchdog.

This breed also happens to be hare-footed as well, a trait developed to help him chase in his hunting responsibilities.

The Samoyed is an old beautiful dog with a double white coat.

He’s popularly known for being graceful, tireless, and powerful.

His hare feet helped him to dispense his duties as a sled dog for centuries without much struggle.

Now, he is a wonderful pet but still has the same paws that come in handy from time to time.

Dating as far back as the early 1600s, the Skye terrier is a truly ancient dog.

Back then, their main job description was hunting foxes and badgers that were known to prey on sheep and other livestock.

During the Victorian times, this agile breed became a known member of the nobility, always hanging out with the nobles and guarding their homes.

He features large, pointed, and elongated feet that look like those of a hare, which he uses when taking off.

The Borzoi is another breed popular for his amazing speed.

One of the requirements as a breed standard is that he should have hare-like feet, compact and well-padded toes, and well-arched knuckles.

The standard poodle is a medium-sized dog with a square appearance.

His feet are compact and oval in shape much like those of hare. They are also small and tend to be arched.

As a very active dog, his paws help him to do a number of activities including playing fetch, running at top speeds, and chasing after toys in the yard.

When it comes to excellent herding of livestock, the ultimate prize always goes to the Australian Shepherd, or Aussie.

This dog has what it takes to ward off predators trying to take advantage of livestock.

Some Aussies have cat’s feet while others feature hare feet, both of which are helpful when navigating rough terrains.

It turns out the standard poodle is not the only dog in the poodle family with hare feet.

The toy or miniature poodle also features the same type of compact, tiny, and arched paws.

The shape is oval, meaning the middle toes are longer than those on the exterior.

The Saluki is among the top five fastest dog breeds.

Thanks to his long, hare feet, he can run on loose sand with relative ease.

Related Post: How Much Does a Saluki Dog Cost?

There you have it; 10 most popular dog breeds with hare feet.

While hare feet may be hard to lift up, they have the advantage of giving the dog amazing speed.

This is why most fast dogs including the Greyhound, Whippet, and Borzoi have this special type of paws.

Webbed Dog Feet vs. Non-Webbed: Should It Be a Concern When Getting a New Puppy?

12 Best Portable Dog Washers Every Dog Owner Should Have