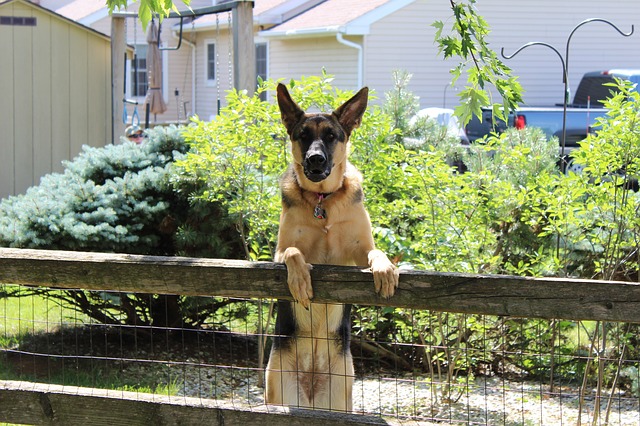 Whether you live in a high-end neighborhood or one with a lot of security issues, a guard dog can prove highly beneficial. Aggressive barking can send your intruder running for the hills. It will also give you enough time to take action. Some dogs can be trained to attack and throw intruders off their feet. They can go as far just to prove their loyalty. If you are looking for a medium to large dog to give your family security and protection, we have just the list for you.

This comes as no surprise to anyone. If you’ve been around a Great Dane before, you know this is one of the most active and fiercely loyal dogs known to man. With an average height of 45 inches and a bodyweight of 160 pounds, a Great Dane simply qualifies as a watchdog by virtue of his size. He may be friendly, reserved, and gentle to his owner, but this dog can easily bring an enemy down. This dog runs fast and follows commands easily making him even better when it comes to protecting those he loves. With proper training, a Great Dane can be taught to bark aggressively towards humans and canines.

Back in the day, German Shepherds were trained to herd sheep. Over time, they joined the police or military units to fight along with the troops. If you are looking for the best medium to large size family dog with a natural guarding talent, a German Shepherd never disappoints. He is a highly intelligent dog breed with extreme loyalty and protection qualities for his owner. Besides being intelligent, this breed has an unmatched sense of smell. He can sniff out trouble from a mile away. A German Shepherd also comes with great stamina and an amazing physique making him a great watchdog.

Don’t be fooled by all the wrinkles and cuteness bundled up in a Shar-Pei. This dog will not just sit by and look cute when the security of his owner is compromised. Besides alerting you of an intruder, he will actually do something about it. Like a German Shepherd, the Chinese Shar-Pei was historically bred to be flock herder. To date, this dog will show his aggressive side whenever a stranger visits the home. He may not bark aggressively but he sure is an excellent watchdog to have in and around the home.

Fourth on our best medium to large size family protection dog list is the well-muscled and wolf-like Kuvasz dog breed. With a graceful pace and a stunning white coat, most people don’t put him to work very much. However, if you train your pup well enough, you will end up with a protective companion forever. A Kuvasz is large and powerful enough to scare away most intruders to your home. He is also a very clever, well-cultured, and intelligent dog with a great stride. While he is often polite to children and his owners, he can become very territorial with strangers.

A Dobbie also qualifies as a good protection dog. This German breed is powerful and large and will let you know if your security is at risk. With a compact and muscular build, this pooch is highly athletic and energetic. He is also impressively intelligent (ranked as the fifth smartest breed in the world), no wonder he finds use in military and police tasks. A Dobberman Pinscher is also responsive and sensitive in nature with a reserved nature towards unknown people.

Rottweiler breeds may look calm and collected around their owners but this can changes quickly in the face of suspicious activity. Like a number of breeds on this list, these dogs were originally used in Germany to protect cattle. With plenty of energy and stamina, Rottweiler dogs can drive a large herd of livestock effortlessly. That hasn’t changed. If you accord a Rottweiler the right training, he can become a force to reckon with when it comes to security. Lucky for you, he is a strong learner with great physical features of a good guard dog.

With strong jaws, a large body, and obedience during training, boxers have all it takes to be good guard dogs. If necessary, these breeds can hang on to prey for as long as it takes. Now you know why they are often used to guide blind people. Boxers are quiet, playful, and energetic (when all is well) and incredibly territorial when they sense danger of any kind. Additionally, these dogs are very loyal, intelligent, and obedient making them effective when it comes to protecting the family from harm.

This Italian dog was bred to not only watch the home but hunt game such as wild boar. If you are looking for a large, athletic, and powerful dog with excellent guard dog qualities, consider getting the Cane Corso. He falls under the working dog group and can surpass your expectations as long as you give him the guidance he requires. Don’t expect a Cane Corso to be friends with animals and people outside the family. On the contrary, he will bark at passersby over the fence and become aggressive when someone approaches you and one of your family members.

If you can handle the hair and trainability challenges of a Chow Chow, you could potentially end up with an efficient security guard for a dog. With looks and mannerisms such as those of a wolf, this breed can become ferocious at the sight of a security threat. When a stranger approaches your front door or gate, this canine will not hesitate to stand guard and protect his owners. The only downside of a Chow Chow is that he not the easiest dog to train. He needs to be trained and socialized by an expert when he is relatively young.

Great Pyrenees developed their brave and protective qualities after long years of guarding flocks independent of their owners. Over the years, these dogs became powerful, wary, independent, and dedicated to taking care of the flock. This behavior still lives to this day among the Great Pyrenees. True, they are not easy to live with but with the right training and attention, they make for strong-willed protectors in the canine category. Beware though that they don’t necessarily attack but rather deliver loud barking in a bid to alert you and intimidate the stranger.

The Belgian Malinois is another working dog that was developed to be a herder. As a result, they come with an impressive work ethic and a fiercely loyal attitude. Today, they are widely used as military dogs for their impeccable bomb-detection and drug-sniffing capabilities. Although they are mildly aggressive, Belgian Malinois are overly protective of their owners. All you have to do is give them some work else they will become bored and problematic for you.

Popularly referred to as the “Gamekeeper’s night dog”, the Bullmastiff is a large beloved dog in the United States and the world over. Before becoming a cute pet, this dog helped night watchmen and gamekeepers chase away poachers and burglars. Presently, policemen and certain military units use the Bullmastiff for different tasks. This low-energy member of the family doesn’t enjoy barking but rather sneaking up on predators. The combination of agility and body weight helps him overthrow a person or animal and pin them down until you come along.

An Akita doubles up as an alert nanny and dedicated guard dog. Whether you want him to watch over your toddler or keep a close eye on your yard perimeter, this breed will not disappoint you. He has very strong protective skills and will stand guard when there’s a stranger approaching your home. Akitas rarely bark. Instead, they carry out their investigations much quietly. The only disadvantage of owning them is that they can be independent. You have to work hard to train and socialize your companion to work well with them.

As the name suggests, the Giant Schnauzer is the largest dog in the Schnauzer family. He is powerful, dominant, and strong. When hanging out with family, this breed bears a cute, chilled, and cuddly appearance. Things can take an 1800 turn when the security of his owners is at stake. As a proud and territorial dog, he has no problem pouncing and barking at an intruder to defend his family. His sheer size and power don’t help to keep him calm either. Of course, all this will depend on the attention and training you afford your fur baby.

Finally, being a member of the mastiff family, Argentine Dogos are great guard dogs. They possess a strong protective instinct towards their family and will fight to the death to keep harm at bay. With an immense desire to please you, you can count on their loyalty in the face of a security threat.  They are obedient and submissive during training making it easy to build up their territorial qualities. Any time a stranger comes to your house, your dog won’t take his eyes off of them until they leave or get a signal to take it easy. Best believe they won’t allow the stranger to leave with any member of the family on their way out.

A family protection dog should be able to bark as a way to alert you of impending danger. Some take matters into their own hands and handle the threat by attacking it. Whichever the method, having a guard dog is a wonderful addition to any family.