Home Breeds 7 Amazing Dog Breeds with Blue in the Name 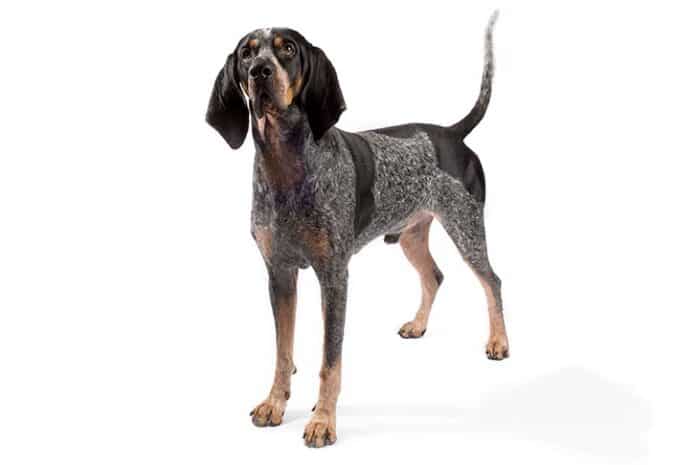 Blue dogs can be such a beauty to behold. The color blue denotes peace and calmness and this is often the reason why some people want to own a blue dog.

Others are just looking for a unique dog—and it doesn’t get any more unique than blue.

But blue dogs are not 100% blue. For the most part, blue is actually a silvery-grey color that comes out as blue.

Most of the blue dog breeds have a recessive gene that gives them the blue coat from their parents.

As a way of describing their coat color, some blue dog breeds have blue in their name.

Interestingly, some have blue in their name even though they aren’t necessarily blue.

See, most blue dog breeds aren’t blue and even the breeds that are blue can have a couple of puppies that aren’t blue.

Here is a list of the most notable dog breeds with blue in their names:

The Blue Heeler is also known as the Australian Cattle Dog and it was bred for herding cattle in the expansive Australian ranches.

These color combinations can give the impression of a blue (or even red) dog and that explains why it’s called Blue Heeler.

Blue Heelers have lots of energy and will therefore be great running companions.

This dog will need to be challenged or else he might get into mischief due to boredom.

This dog breed is also referred to as the Irish Blue Terrier and it hails from Ireland where it was bred to help in controlling rodents that were becoming a nuisance in homesteads.

With time, however, the Kerry blue terrier has evolved into a work and companion dog and is now popular all over the world.

The dog is now used for herding livestock and also as a guard dog around the world.

As the name suggests, the Kerry blue terrier’s coat comes in several shades of blue although it is also described as having a progressive grey color.

The pups are usually black at birth but the blue starts appearing gradually as they grow older.

The Blue Lacy dog breed, sometimes just called Lacy Dog, hails from Texas and it is an energetic and trainable dog that loves being kept busy.

Lacy Dogs have the blue color gene but their coats can also be tri-colored or have some red.

Contrary to common belief, Lacy doesn’t refer to how the bred looks – it’s just the name of the family that is believed to have first bred it.

Because they are native to Texas, these dogs are very common there although you can also find them in other states.

Bluetick Coonhound is a Coonhound breed. This breed is great for hunting raccoons but it is also kept as a pet.

Like most other hounds, this dog is muscular and streamlined for speed.

It has a moderately coarse coat that is also glossy.

The blue color comes from the black ticking on a white background that results in a navy-bluish color.

The ticking is all over the body but there are also randomly shaped black spots on the coat.

Because these dogs were bred for hunting, they need to be kept active for them to be happy.

The Alapaha Blue Blood Bulldog was bred in the United States to be a catch dog. This entails driving as well as catching cattle and other unruly animals.

These are well-built and powerful dogs that have large heads with brachycephalic muzzles.

Their coats are short and are usually white but with blue, black, brown, or buff patches.

These dogs are alert, self-assured, and outgoing but they might have a problem welcoming other dogs or strangers.

These puppies will need to be taken to puppy class for obedience training for them to be good house pets as they grow up.

The Blue Picardy Spaniel is a breed that hails from France.

It is a descendant of English Setters and Picardy Spaniels.

Even though this dog is relatively quiet, it has huge stamina and will therefore need a lot of exercise.

However, the color of the coat is distinctively different.

While Picardy‘s coat is mostly brown, the Blue Spaniel Picardy’s coat is usually a mix of black and grey which can give it a bluish look.

The Blue Paul Terrier is another awesome dog breed with blue in its name.

Sadly, this breed is now extinct. This breed is believed to have originated in Scotland where it was mostly used by gypsies for dogfighting.

From its physical appearance and character traits, this breed must have been bred from terriers and bulldogs.

It was a very popular dog breed in the 19th century, especially in Scotland.

However, the popularity waned over time and it eventually became extinct.

As we have seen from the list above, not all breeds that have blue in their names are actually blue.

For the most part, the blue describes a diluted version of gray and black which tends to blue.

Also, some breeds have other colors besides blue in their coats.

You shouldn’t, therefore, assume a dog will have a blue coat just because he has blue in his name.