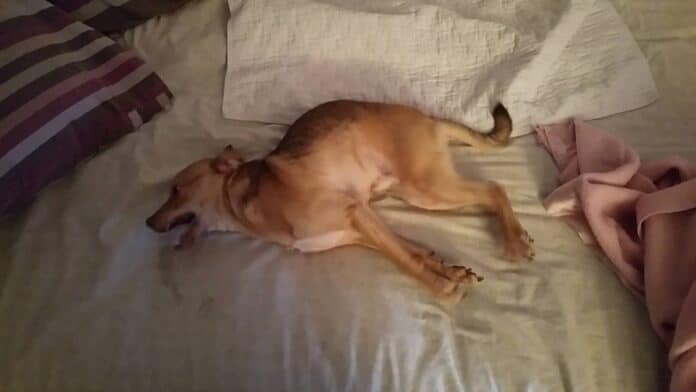 Watching your dog when he has bouts of seizures can be a scary experience.

Sadly, seizures are very common in dogs and you may also have to deal with the ordeal with your dog.

These seizures stem from a disorder in the central nervous system.

Epilepsy is a condition where the dog has frequent and interment seizures.

A fit typically lasts a minute after which your dog should get back to normal.

However, if the seizure is caused by a brain tumor, the dog might have a hard time getting back to normalcy thereafter.

Seizures have pronounced symptoms that make it easy to tell if your dog is having a fit.

The dog usually has a sudden motor response that commences in the brain. This is often displayed through severe tremors throughout the entire body.

In some cases, the seizure may not affect the entire body and only some parts experience the tremor or uncontrolled movement.

Seizures happen in three distinct phases and it is a good idea to understand the symptoms of these phases to know when a dog is having a seizure and at which stage.

A. The Aural Phase

This is the stage just before the fit starts. Some of the common symptoms include open anxiety, droll, pacing, and gazing into space

B. The Ictal phase

This is the phase when the actual fit hits.

Some of the common symptoms include disorientation, loss of consciousness, lying down, moving legs as if swimming, twitching of muscles, howling or barking, foaming at the mouth, peeing, and pooping.

Just after the fit passes, your dog will be in the postictal phase.

Symptoms exhibited at this stage include loss of balance on the feet, not responding to you as they normally do, and physical exhaustion.

But…Can dogs have seizures while they sleep?

Most seizures in dogs happen when the dog is awake.

So, the seizure can strike while the dog sleeps.

What does a dog seizure look like while sleeping?

If you see your dog having a violent tremor in their sleep, there is a good chance he is having a fit.

The tremor can affect the whole body or just a couple of muscles.

Twitching and kicking of legs is a common symptom for dogs that are dreaming but this sign can also be witnessed in seizures when your dog is asleep.

The biggest difference is that dogs typically don’t urinate or poop when they are dreaming but they do when they are in a seizure.

Drooling and foaming at the mouth are other important symptoms to look out for.

Is my dog dreaming or having a seizure?

Every dog dreams—and most exhibit this by kicking of their legs and twitching. These movements are usually as brief as 30 seconds and they happen intermittently.

However, when a dog is having a seizure, his limbs will be stiffer and more rigid and exhibit more violent movements.

A seizing dog will be disorientated after they wake up and they will most likely droll and pant while those that are dreaming won’t drool and pant and they sure will not be disoriented.

Additionally, it is not easy to wake up a dog that is having a seizure while dogs that are in dreamland can easily be woken up.

Even though it is easier to wake a dreaming dog than one that is seizing, it is not a good idea to wake them up.

Waking them up when they are dreaming could startle them which can cause involuntary scratches or bites.

If you however want to wake him up because the movements they are making are scaring you, you should do so by calling out their name or by dropping something on the floor.

If they wake up, you can be sure they were just dreaming but if they don’t respond, then you can safely infer they were having a fit.

Do dogs stop breathing during a seizure?

A seizure happens in different phases and each seizure lasts for different lengths.

The grand mal phase typically lasts 10-30 seconds and during this time, the dog will fall, extend his limbs and lose consciousness. The dog might also temporarily stop breathing.

Some dog owners believe that they should hold the mouth of the dog open to assist in breathing.

But you shouldn’t try to do this because your dog could involuntarily bite you.

Even though the dog might stop breathing for a couple of seconds, it will not be fatal. Once the seizure passes, the dog will get back to normal.

On average, a seizure should last for a minute but if your dog’s seizure lasts for 3-5 minutes, you need to take him to the vet immediately.

Do dogs always lose consciousness during a seizure?

Whether your dog loses consciousness during a seizure or not depends on the type of seizure they are having.

A partial seizure (focal seizure) will only have an impact on an individual part on one side of the brain.

As a result, your dog may not lose consciousness during a simple seizure.

However, when your dog experiences a generalized seizure, both sides of the brain will be affected and as a result, the dog will lose consciousness.

Do dogs sleep a lot after a seizure?

Disorientation and exhaustion are common side-effects of seizures in dogs.

As a consequence, your dog will try to restore normal functions and he will exhibit hunger and a desire for more sleep.

If your dog is hungry, he may not sleep well, so you may start by feeding him—but only after he is no longer disoriented.

Overheating can cause prolonged seizures and if this was the case, use a fan or a wet jacket to bring the temperatures down.

This will help the dog to sleep soundly and also reduce the chances of another prolonged fit.

Seizures in older dogs while sleeping

Seizures in old dogs can be caused by all manner of things.

Dogs that have had a healthy life and that suddenly develop seizures in their old age could indicate an increase in pressure in the skull which is likely caused by a tumor.

Old dogs can also develop seizures if they are exposed to toxins in certain medications.

This is easier to deal with because it’s just a matter of removing the toxins from the system and stopping the use of the identified medicines.

Lastly, seizures in older dogs can be caused by metabolic issues. This could be as a result of organ dysfunction (e.g. kidney or liver) or severe disease (e.g. diabetes).

Since there are lots of causes of seizures in older dogs, it is best to take your dog for a medical exam to ascertain the cause and possible remedies.

What can I give my dog after a seizure?

After your dog has just had a seizure, you can give him some vanilla ice cream or a dose of rescue remedy.

Rescue remedy can help calm down your dog and the ice cream will help to restore your dog’s blood sugar level which will have drastically dropped during the seizure.

Bringing the blood sugar up using ice cream is an easy but powerful hack because apart from restoring normalcy, it will also help to reduce the chances of another episode.

If you notice predictable pre-seizure behavior, you can give him the ice cream as soon as you see the signs and this could prevent the seizure altogether.

Just remember to thaw the ice cream a little bit by either zapping it in the microwave or by allowing it to sit outside the fridge for a while.

Should I leave my dog alone after a seizure?

As we have seen, your dog will most likely be disorientated after the seizure.

He will not only be confused but also restless, thirsty, hungry, and temporarily blind.

He might struggle walking as he will have lost balance and might even bump into objects due to poor eyesight.

You may want to hold your dog or sit with him on the couch or floor and pat him gently to reassure him and keep him calm.

You could also dab his head, groin, and neck with a wet towel on his head to lower his temperature and prevent a relapse.

Leaving your dog alone after a seizure is not recommended as he might harm himself.

Seizures are pretty common in dogs, so it should scare you when your dog starts to have a fit.

However, it is important to take your furry friend to the vet for examination as soon as possible. This will help determine the cause which will help you know how best to take care of your pet.

Also, if you have more than one dog, it might be a good idea to keep the other dogs away when one is having a fit to stop the pack mentality from kicking in.