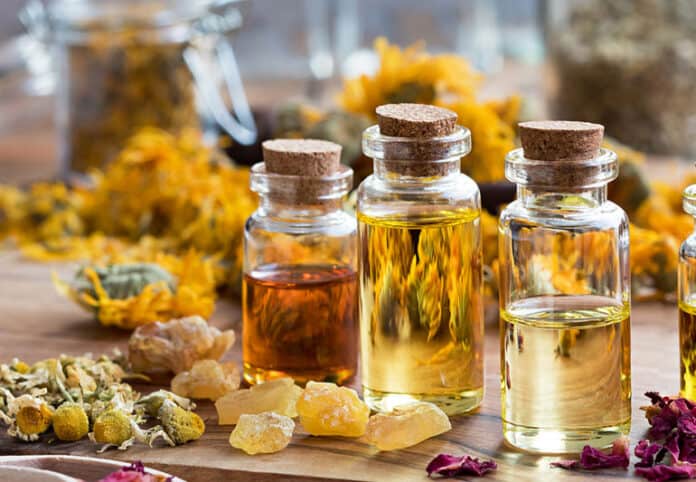 Essential oils (EOs) are known to have anticonvulsant activity and this is why they are useful in the management of epilepsy.

Essential oils have a unique ability to moderate the GABAergic system and they can also adjust the ionic currents.

These are the two main reasons why EOs are good at controlling seizures.

However, not every essential oil will work. Some will actually exacerbate the situation because they have convulsive properties.

You want to keep away from essential oils like hyssop, camphor, rosemary, sage, eucalyptus, thuja, cedar, and fennel. These EOs have thujone, pinocamphone, or camphor which are convulsive agents.

Look for oils that have asarone, carone, eugenol, citral, or linalool because these compounds are known to alleviate epileptic seizures.

To make your work easier, here is a list of some of the best essential oils for dog seizures.

Frankincense is one of the most popular remedies for epilepsy.

It works by stimulating the limbic part of the brain which consequently helps in emotional releases.

Putting a drop on the neck or the paws before the dog turns in for the night can help to prevent seizures.

In the event of a seizure, frankincense can help reduce the severity of symptoms e.g. the pup will be less disoriented.

Lemongrass oil is extracted from lemongrass, a tall grass that is native to the tropical parts of Asia.

It is used as a spice in food preparation and also for the treatment of lots of ailments including seizures.

A Brazilian study on animals established that the lemongrass essential oil was effective in treating seizures because of its anticonvulsant properties.

Lemongrass can be inhaled, applied to the coat, or added to the food.

Lavender oil is a natural anticonvulsant, so it is a good essential oil for the treatment of seizures in dogs.

Lavender is known for its relaxing effect and this is one of the reasons why it is used for treating insomnia and migraines.

When lavender gets absorbed into the bloodstream, it causes a chemical change in the body.

This change usually has a soothing effect on the nervous system which is the reason why it’s also good for seizures.

Please note that spike lavender is not recommended for dealing with seizures because it has convulsant properties.

Dill was traditionally used in Iran for the treatment of seizures and studies have now confirmed its efficacy in dealing with epilepsy and other ailments.

In addition to the analgesic and anti-inflammatory properties, Dill has also been confirmed to have anticonvulsant properties.

Nutmeg oil is extracted from the seeds of the Nutmeg tree.

Nutmeg is a commonly used herb in most kitchens but nutmeg oil has lots of health benefits. For instance, this essential oil is known to fight seizures.

Nutmeg oil contains significant anticonvulsant properties and scientists have established that it can be effective in fighting both partial and grand mal seizures.

Coconut oil has amazing properties that can help you deal with seizures in dogs.

For starters, it has anti-inflammatory properties and this can help to curb seizure-related brain inflammations.

It also has medium-chain fatty acids, so you can add them to the food to help in stopping seizures.

Be sure to use the coconut oil moderately though to avoid any complications.

There are two types of basil: holy basil and sweet basil.

Oil extracts from holy basil have been found to reduce seizures.

Eugenol, which is an extract from sweet basil, is also believed to lessen the nerve action potential in animals.

By and large, basil is a good EO for dealing with mental fatigue and decreasing anxiety.

But the qualities that make Basil extracts and essential oils important for dealing with seizures include anti-oxidant, anti-inflammatory, and neuroprotective qualities.

Ylang Ylang is a flower that originates from Madagascar and is popular for its amazing scent and aphrodisiac qualities.

But in addition to this, Ylang Ylang extracts can also be used to treat intractable seizures.

The calming effect of Ylang Ylang can help to alleviate the symptoms of epilepsy and even eventually cure it completely.

Chamomile is widely used for aromatherapy and it has amazing calming effects.

If your dog undergoes extreme stress because of a near-death experience or some other horrible thing that might have happened, they might have abnormal brain activity that could manifest in seizures.

In such a case, chamomile will help them get more relaxed, overcome the stress, and ultimately deal with the seizures.

But there is more: this oil will not only restore the dog mentally but physically as well.

Dogs are usually physically exhausted after a seizure and the relaxing properties of Chamomile can help them stay relaxed which will help them rejuvenate.

Copaiba oil extracts were used in traditional Brazil to treat inflammation and other medication conditions.

It has now emerged that Copaiba oil resin can also be used not just for its anti-inflammatory qualities but its neuroprotetive qualities as well.

The copaiba essential oil is extracted from the Copaiba oil-resin through a process of distillation.

This oil can be used to treat the central nervous system after some damage has been done to it thanks to epileptic seizures.

Roman Chamomile is arguably the oldest herbal remedy known to us but it is still as relevant today as it was in ancient Rome.

This plant is rich in terpernoids, which are organic chemicals that are great antioxidants and they also have anti-inflammatory properties.

But more importantly, Roman Chamomile has anticonvulsant properties and that explains why several anti-seizure drugs are made from it.

Even though it is commonly used for treating humans, it is also okay to use it for dogs.

However, you shouldn’t use it for your cat unless by the express permission of your vet.

Vetiver is another awesome essential oil for dealing with seizures in dogs.

Your puppy can ingest, inhale or you can apply the EO on their coat.

This plant is native to India but its medicinal properties have made it popular and it can now be found around the globe.

The vetiver essential oil is extracted from its roots through a process of distillation.

Vetiver has a rich and intricate fragrance but its essential oil is calm and smooth.

Lamiaceae, also known as Labiatae, is one of the plants in the mint family that has over 7,000 species.

Its aromatic essential oil is used in pharmacology for its anthelmintic, antimicrobial, and anti-inflammatory properties.

This essential oil has over 50 metabolites which have been known to reduce as well as prevent seizures.

As we have already seen, not every essential oil is good for seizures. Some might cause seizures instead of stopping them.

Make sure to use essential oils that have anticonvulsant properties (like the ones described above) to avoid causing more harm than good.

Also, you may want to take your furry friend to the vet before you start administering the essential oil.

The vet should examine the dog to determine the cause of the seizures before you start using essential oils.

In some cases, (e.g. if the seizure is caused by a tumor) another solution like surgery might be needed.

10 Essential Oils For Dogs that Lick Their Paws (Excessively)

Which Essential Oils are Toxic to Dogs?