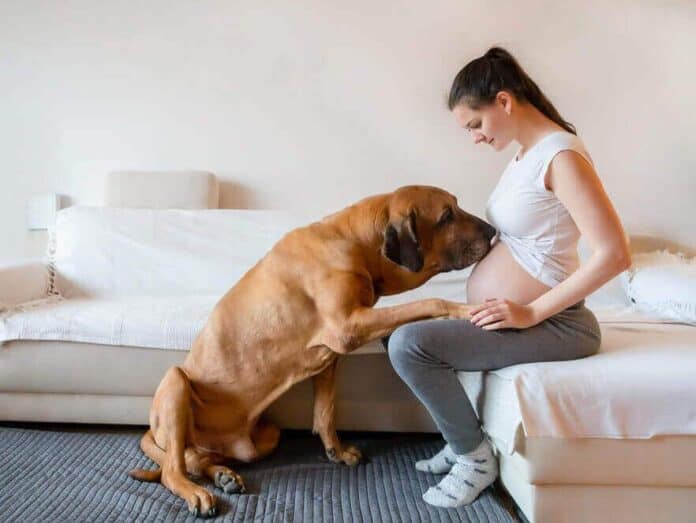 Dogs have an amazing sense of smell. They have approximately 300 million olfactory receptors which make their sense of smell almost 100,000 times better than humans.

As such, dogs pick on up scents that humans can’t.

Dogs typically know their owners by their scent. Once your dog picks your scent, he will know exactly how you smell and will tell if the scent changes.

When you get pregnant, your hormones will alter your scent and your dog will pick up on it.

In the event of a miscarriage, the scent will again be altered which your dog will quickly pick up and know something is wrong.

So, it suffices to say that yes, dogs can sense miscarriage in humans.

That said, this notion has not been subjected to scientific study yet and is therefore mostly conjecture.

But there are lots of examples of people who have reported how their dogs sensed their miscarriage.

Author Williams writes how she had a miscarriage after 7 weeks and how her dog knew something was wrong with her and was always doing her best to lift her spirits.

Another mum narrates her ordeal in a forum post where she explains how her dog sensed her miscarriage.

Interestingly, this mum felt more encouraged by her dog than her human friends.

People seemed not to know what to say but her dog would just lie next to her and that was more comforting than all the words of comfort she got from her friends.

But the experience of Jennifer Fandrich is arguably the most fascinating of all. She narrates how her dog was always protective of her when she got pregnant.

One night, however, her dog did something out of the ordinary—he put his head on her belly and put on a sad and concerned look. A couple of days later, Jennifer had a miscarriage.

These are three random examples of dogs that sensed miscarriages. And even though there might be no scientific proof, this should be enough proof that indeed, dogs can sense miscarriages in humans.

Your dog will not only sense when something goes wrong but will also offer unwavering love and support during those dark moments.

How to tell when your dog is sensing a miscarriage

As we have already established, dogs have an amazing olfactory vortex that makes it easy for them to sense all manner of things.

When your dog senses a miscarriage, he will try to communicate to you about it.

For instance, your dog will start following you around more than usual and he will have a different demeanor.

Here are some of the tell-tale signs that your dog has sensed a miscarriage.

Just watch out for any noticeable behavior change. For instance, your dog might start barking at you when you get pregnant. This is because he noticed the change in your body scent.

However, if you have a miscarriage, he will most likely replace the barks with howls.

But it is never the same reaction across the board. Different breeds will react differently, so just watch for any noticeable behavior change.

What to do when your dog detects your miscarriage

How you respond to your dog detecting your miscarriage will depend on when the dog detected it.

If the miscarriage has already happened, your dog will most likely be clingy and want to shower you with love.

Allow him to kiss you as much as he wants and spend lots of time cuddling.

When you want to rest on the couch or in the bed, your dog will most likely want to be with you.

They will enjoy the time and it will also be therapeutic for you.

However, if your dog shows signs that he is detecting a miscarriage that hasn’t happened, don’t take it for granted but rush to your doctor for a checkup.

You might just save your unborn baby or avert a complication that could result from the miscarriage.

Yes, it could turn out you read the signs wrong but it’s always better to be safe than to be sorry.

Why do dogs get protective when you get pregnant?

When you are pregnant, your hormones can cause your scent to change and dogs can easily notice it.

But your body also starts changing and so does your gait. Likely, your routine will also change—it could be something as small as waking up in the night to pee or changing your cooking and eating habits.

In addition to their incredible sense of smell, dogs are also very observant and will notice these changes.

There is no proof that dogs understand the changes but it is evident they know something has changed.

More often than not, these changes will make the dog get protective of their owner—although their behavior can get back to normal as soon as they get used to the changes.

Related Post: Why Is My Dog Aggressive When I’m On My Period?

Dogs can be trained to “smell” illness

It’s a fact that dogs can sniff death and they have been used for centuries to sense dense and thereby warn humans.

Hospice dogs are usually trained to seat with and comfort those who are dying.

Owing to their impressive sense of smell, these dogs can learn to identify distinct smells that are associated with death.

This is why dogs have been used to predict death for centuries.

It is believed that early Egyptians would use dogs to know when an ailing person was almost dying.

Even though there isn’t much scientific research on the ability of dogs to detect miscarriages, there are lots of studies that have proved that dogs can smell illnesses.

For instance, a study was done to determine whether dogs can detect the presence of bladder cancer just by smelling urine.

The study concluded that dogs can actually smell cancer in the urine.

Dogs have also been used to detect seizures before they start which can prove helpful in the management of epilepsy.

If you think about it, the concept of smelling for cancer, epilepsy, Parkinson’s disease, or any other ailment is the same that can be used for smelling miscarriages.

The training is usually not aimed at teaching the dog to pick the distinct scent—they already do this naturally.

The training is meant to teach the dog to identify and differentiate the scent.

Training a dog to detect a miscarriage or any kind of illness is a complex endeavor.

Dogs are usually trained to sniff plasma, urine, or sputum and taught to sit or give some other physical sign when they detect the illness.

The trainer then rewards them with a treat. But it is more complex than it sounds as it calls for patience and dedication before the dog gets fully trained. That is why it is best to allow a professional trainer to do it.

Your dog’s incredible sense of smell enables him to detect if you have a miscarriage.

He may not be able to understand what a miscarriage is but he will understand something has gone wrong. And he will want to love on you and comfort you.

To put it plainly, your dog will be your best companion as you battle with the emotional pain of losing your unborn baby.