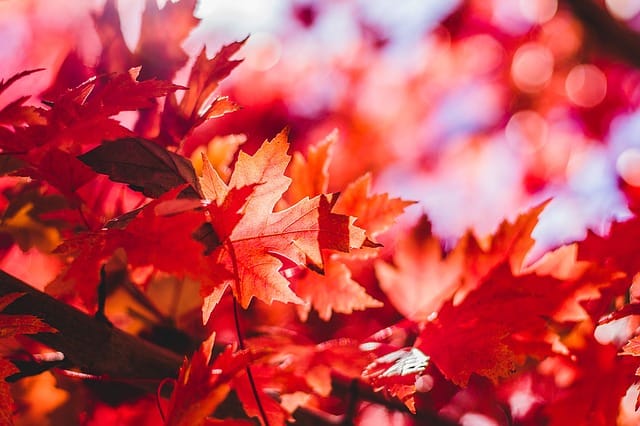 If you are looking for a colorful tree that is pleasant-looking and useful, look no further than the maple tree. From making syrup to producing soap to manufacturing medicinal herbs, Maples find uses in many areas. During fall, the plant shows off its beautiful colored leaves of red, orange, and yellow shades that we love so much. But are they poisonous to our little four-legged friends?

Maple trees come from the genus Acer and family Sapindaceae. It consists of 125 species all growing in different parts of the world. Some of the common varieties include the following:

Are Maple Leaves Toxic To Dogs?

Red maple trees are safe for dogs according to the ASPCA. If your doggie chomps on the leaves, she will not suffer any ill effects. Of course, if she eats a massive amount, she will have some stomach upsets because her gut is not built to digest plants. The other two varieties are also not listed as toxic by the ASPCA. With that said, Maples are very toxic to horses. The Red Maple is the worst of them all.

The tree has a high garlic content that degrades the function of red blood cells in the horse’s body. This lowers the level of cells in the blood causing death within 18 hours after ingestions. All animals of the horse family including donkeys, ponies, and zebras don’t do well with ingesting the maple tree. Homeowners with any of these animals should never plant the trees. They are far too dangerous around the poor livestock.

Is The Japanese Maple Toxic To Dogs?

Many people have trouble telling the difference between the red maple and the Japanese maple trees. The latter is known as Acer Palmatum and is native to Japan, Korea, Mongolia, Russia, and China. The trees grow to a height of 30 feet and have colors from red to purple to green. Both trees may look alike but they are from different genera.

The Japanese maple is a group of more than 100 species all with different colors and forms. On the other hand, the red maple is just one of the varieties of maple trees. It grows taller than the Japanese maple and has larger leaves. Fortunately, both are safe around dogs. Feel free to add any of the varieties to your lawn. Your dogs will not be vomiting nor having runny stools from eating the leaves of the plant unless of course, they eat tons of it.

Plant toxicity is a scary part of pet parenting. It can damage the vital organs or worse, cause death. Fortunately, the maple tree doesn’t pose any danger to dogs. This is good news if you love the tree and have a dog at home.

Is Verbena Poisonous to Dogs?

Are Begonias Poisonous to Dogs?

Is Jasmine Poisonous to Dogs?

Are Cosmos Poisonous to Dogs?