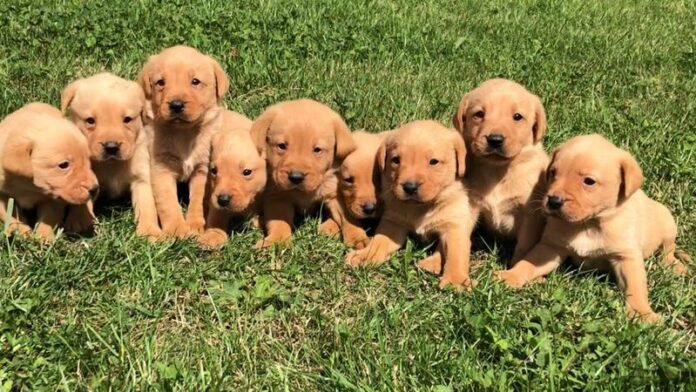 Canine breeding is a 50-50 affair as far as gender is concerned.

When two dogs mate and conceive, there is no telling the sex of the puppies.

Because the sire has both X and Y chromosomes, you will get both males and females.

Mother Nature decides how things play out, for the most part.

However, what if we told you that you can affect the sex of the litter as well?

For centuries, breeders have experimented with different breeding techniques to manipulate the gender of the litter.

What can you do to get more female puppies in a litter? Here are a few suggestions…

1. Swab The Dam With White Vinegar

There are a few factors that influence which chromosomes from the sire get to fertilize the female egg.

One of them is the pH of the dam’s vagina.

The pH of the dam’s vagina determines whether the X or the Y chromosome survives or dies.

An acidic vagina is favorable for the X chromosome and hence the production of bitches while an alkaline vagina is ideal for the Y chromosome which gives males.

Knowing this, your responsibility is to manipulate the pH of the dam according to your desired gender of the puppies.

Certain breeders swear by the acid/alkaline method of breeding claiming it never disappoints them.

In your case, that means making sure the dam’s vagina is acidic to allow the survival of more X chromosomes and fewer Y chromosomes.

One popular method is using acidic swabs on the dam’s genitals. Breeders often use diluted vinegar or baking powder to achieve this.

Simply dab a swab into a solution of white vinegar and water or baking powder and water and wipe it over the dam’s vagina then hope for the best.

While this method may give you more female puppies, it can also decrease the size of the litter.

Perhaps it is because the male sperm never made it through decreasing the overall number of puppies resulting from breeding.

To further get the dam’s vulva acidic, you can give her an acidic diet a few weeks before breeding.

The fastest way to increase the dog’s pH is to feed them cranberry juice.

Use pure unsweetened juice from a reputable health food store.

AKC recommends using this method two weeks before breeding for the best results.

Apart from raising the pH of the dam, the time of breeding may also affect the gender of the puppies.

However, the Y dies faster along the way compared to the X.

That means if you breed earlier on, the X sperms will survive long enough to meet with the female’s egg resulting in more females.

If you wait longer, the likelihood of getting more males goes up.

For example, if you breed the dog as late as the 19th day, don’t be surprised if you end up with more males than females in the litter.

This might come as a shock to you but the age of both the dam and sire determine the sex of the puppies in the litter.

Well, this is according to the findings of a research by a team at Brazil’s Pontifical Catholic University of Minas Gerais Veterinary Medicine Department.

The main goal of the researchers was to determine the characteristics that led to the production of a certain gender.

All the dogs were bred naturally—no artificial insemination took place.

From the study, the researchers discovered that the number one determinant of the sex of the puppies was the dam’s age.

The sire’s age also comes to play albeit at a lower intensity.

On average, the team found out that more males were conceived when an older dam and a younger sire were mated.

It was the same story for a young dam and an older sire.

However, when a young dam and sire were bred, the resulting litter had more females than males.

The actual science behind this is yet to be discovered but scientists believe that the dam’s vaginal composition changes as she ages.

Ultimately, these changes can cause the dam’s vagina to be hostile towards the X chromosome.

You cannot argue with results; if you want more females in the litter, consider using a young dam and a young sire.

The study pointed out that the chance of getting male puppies increases by 15% after the dam’s second year.

5. Play With The Angle Of Penetration Or Insertion

The fifth method to get more female puppies is to choose a penetration or insertion method that elongates the distance traveled by the sperms to reach the egg.

Again, this one follows the principle that the female sperms are slower but stronger as opposed to male sperms that swim faster but are weaker in nature.

One of the ways is to make sure the sperms travel a longer distance before reaching the waiting egg.

You can achieve this by using deep penetration and insertion angles.

If the environment of the dam’s vagina is already acidic, it will cause the death of more male sperms—a perfect combination for the survival of the X chromosome.

This is a much more precise method.

When you need more females, simply harvest the semen from a male dog and have it sorted at the lab to get rid of the Y chromosome that causes more males.

The method is heavily used in the livestock industry to produce a certain gender over another.

For instance, if there’s a high demand for milk, breeders would get more X chromosomes from the male cow going into the female cow’s vagina.

To state the obvious, this method can only work for artificial insemination and not natural breeding.

There are different reasons dog breeders prefer a certain gender in a litter over another. Often, this satisfies the desire of their clients.

Other times, they want more females because they want to use them for future breeding routines.

Whichever your reason is, you can implement one or a combination of these strategies.

Keep in mind that none of this is 100% accurate.

If things don’t go your way, don’t panic. Keep trying until things work in your favor.

How to Pick a Puppy from a Litter at 4 weeks