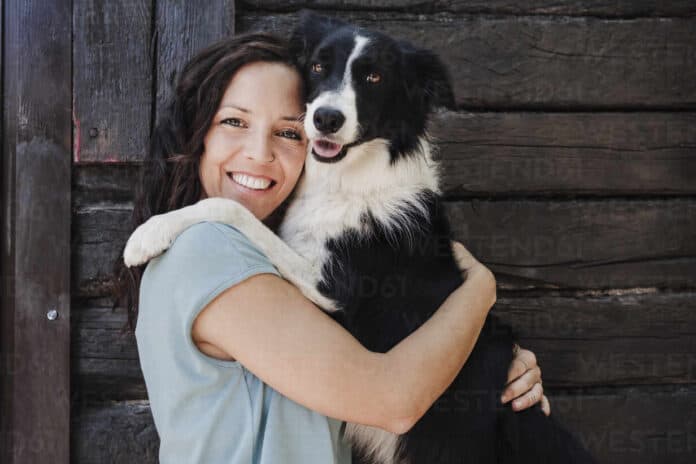 Border collies are famous for their hugging. There are lots of cute videos on YouTube of these dogs hugging.

This is an interesting phenomenon because most dog breeds prefer communicating through barking, wagging their tails, and other non-verbal forms of communication—but seldom do other dog breeds hug.

Humans usually hug as a sign of affection and love and it is easy to assume that dogs hug for the same reason too.

But dogs usually hug each other as a sign of dominance. A dog will place his paw on another dog to show his dominance.

If you keenly observe hugging dogs, you will notice that it is always the same dog that places its paws on the other—because the dominant dog will be the one to place the paw on the other one.

That said, dogs, especially border collies, can be trained to hug as a sign of affection.

For instance, when puppies are hugged, they grow up to appreciate that humans hug to display affection.

However, the dogs will almost always be uncomfortable while hugging because it sends the message of dominance as opposed to the message of affection.

But even though they are uncomfortable, dogs understand that humans are their Alphas and they will go out of their way to please them.

How Border Collies Show Their Affection

As we have seen, border collies hug for two reasons:  mostly as a sign of dominance and sometimes because they are trained to do so as a trick or for affection.

But hugging to show affection is not their cup of tea.

Here are a couple of ways that your border collie will show their affection.

I. Staring at you

Border collies seem to understand the power of using eyes for communicating affection.

He will stand and just gaze at you and as soon as your eyes lock, he will start wagging his tail furiously in anticipation of some quality time with you.

It’s almost like he knows you cannot resist those beautiful eyes.

Border collies are very clingy because they are always craving your attention.

As soon as you enter the house, they will greet you at the door and be all over you.

If you step of out the room, they will happily follow you around the house. If you try to leave the house, they will insist on coming with you.

III. Place their paw on you

When he gets bored, which is almost anytime he is not playing, he will come to where you are seated and place his paw on you.

Border collies love being the center of attention. When they realize you are busy with other things and are not focusing on them, they will insistently nudge at you with their nose until they get your attention.

Once they get your attention, they will lay their head on your lap.

Border collies love kissing to show affection. They will sneak up on you when you are preoccupied and shower you with kisses until you notice them and engage them with a toy, cuddles, or any other way of keeping them engaged.

Border collies, like most other dogs, know that love needs to be reciprocated.

And because they love you unconditionally, they expect you to return the favor by rubbing their belly.

They will come to where you are seated and lie down on their back ready for the belly pat.

VII. Sitting by your side

When something or someone gets on your nerves, your body collie will realize how upset you are and they will come and sit by your side.

It’s almost like their way of saying, “I understand you are having a bad day but I am here for you.”

VIII. Greeting you at the door

Your body collie will greet you at the door with jumps of joy.

However exhausted you might be, these dogs can’t just contain their excitement to see you back.

Their joy is contagious and even if you had a bad day, your moods will be lifted instantly and you will happily play with them or just cuddle on your couch.

Because of their emotional nature, border collies can get jealous, especially if they sense you are not focusing on them.

Collies form very strong bonds with humans and that is why they easily get jealous when their humans start focusing on work or other family members and pets.

You can easily tell this when your collie starts whining and mumping as soon as they think you have abandoned them.

The easiest way of dealing with the jealous behavior of your collie is by giving them the attention they are craving.

But this is often easier said than done. For instance, it might not be possible to attend to your furry friend if you are working from home or engaged in some other activity that needs your undivided attention.

One way of managing their expectations is by playing with him alongside other pets at the same time. This will let them appreciate sharing your attention.

By and large, you will still need to create time for them because they are a very clingy breed.

Do Dogs Get Jealous Of Babies? (Plus Jealousy Signs & How to Deal Witt them

Border collies don’t always hug as a sign of affection. More often than not, the hug is a show of dominance.

However, there is always the exception for collies that have been trained to hug as a sign of affection.

In such a case, you may want to look for other tell-tale signs of affection.

Also, you may want to show your dog affection through other ways apart from hugging just to avoid sending him the wrong message. For instance, rubbing his belly will be received much better than hugging him.