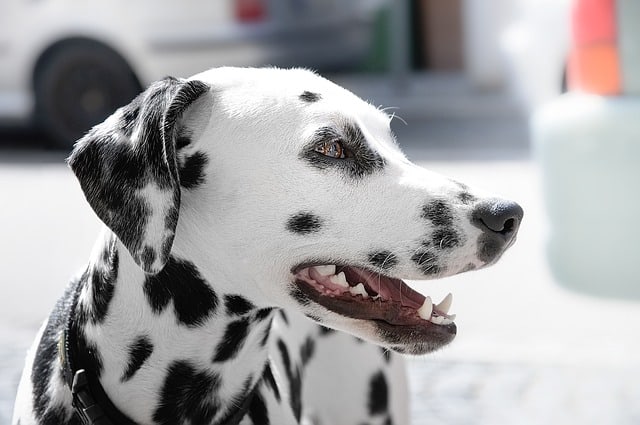 Distinguished for his liver-spotted coat, the Dalmatian is a truly eye-catching and unique breed. The beauty of his coat coupled with his well-built physique makes him an instant show stopper everywhere he goes. Beauty aside, the breed is non-aggressive and outgoing. This makes him a great family pet. He doesn’t discriminate between owners and strangers. As long as you are kind to him, he will return the favor.

If you live in an apartment, having a dog that makes a lot of noise can be a subject of concern. You don’t want to have trouble with your neighbors. Even without other neighbors around, a noisy dog can be so annoying. From waking your family up in the middle of the night or making it hard to watch your favorite TV show, there’s nothing fun about living with a canine that barks a lot.

Dalmatian scores 3 out of 5 as far as barking is concerned. It is therefore safe to say that this breed is an occasional barker. He’s somewhere in the middle—not the most annoying of barker and not the quietest of dogs either. There are plenty of reasons your Dal barks. These include the following.

How To Stop The Behavior

A Dalmatian’s bark can drive you up the wall. If you are a first-time owner, you will find yourself considering dropping off the canine in the nearest shelter. Fortunately, there are things you can do to alleviate the problem.

Yes and no. It depends on the individual dog among other factors. For example, a dog that is left alone at home all day is bound to bark more than the one that has company all the time. Additionally, if the dog has enough food, water, and toys, he will bark less compared to the one who needs something from the list. A pet parent that makes sure their pet is exercised daily will have a quieter canine buddy than one that doesn’t.

What Sounds Do Dalmatians Make?

To say that a Dalmatian only barks when he wants to communicate would be a big lie. These dogs make plenty of other sounds including whining, purring, grunting, growling, sighing, and groaning. Sometimes they appear as though they are singing a number. Between being excited, commanding attention, and being territorial, this breed often finds himself using his vocal cords in ways that are unusual for other dogs.

Dalmatians are thought to be very noisy. However, these dogs happen to score way less compared to others in the noise meter. The next time your Dal drives you nuts with his wails, just remember someone is going through worse.