Home Breeds Parti Yorkie vs Biewer: Which One Makes the Best Furry Companion? 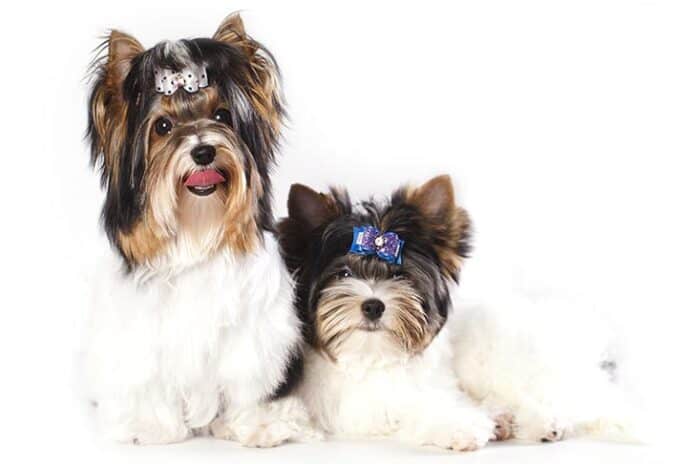 Brave, feisty, and bossy… the Yorkshire Terrier or Yorkie is one beloved dog in the United States and the world over. This breed is particularly famous for its larger-than-life personality. She may only have seven pounds of weight to throw around but the Yorkie is no ‘small’ dog. If a German shepherd shows up at your house, she will not run behind the curtain and hide. On the contrary, she will back and approach the massive dog ready with a brave face. She is also intelligent, adaptable, truly beautiful, clean, and low-maintenance.

When it comes to the Yorkshire terrier breed, you have several options to choose from. You can go for the regular coloring of tan, black, or blue or choose their counterparts with white markings on their bodies. The latter category can be a Parti Yorkie or a Biewer. If you are interested in knowing more about these two special groups of Yorkies, we have the entire scoop for you.

What is a Parti Yorkie?

According to the American Kennel Club (AKC), the Yorkshire terrier dog should have black, blue, or tan colorings. A Yorkie can get away with just a tiny white marking but it shouldn’t be more than one inch. The Parti Yorkie boasts a massive amount of white on her body. This is what sets him apart from the regular Yorkie. It’s the same way a black or chocolate lab still belongs to the lab family despite having an unusual coloring. So, in essence, a Parti Yorkie will have the usual colors such as black, tan, and black accompanied by large white or chocolate markings. They can combine all these colors or come in solid shades. The two common examples are all-blonde Yorkies and all-chocolate Yorkies.

What is a Biewer?

Also called the Biewer Yorkshire, Biewer terrier, or Biewer Yorkie, the Biewer is a German version of a Parti Yorkie. The breed was developed by Mr. and Mrs. Biewer, a German couple with a passion for terrier dogs. The Biewers bred Yorkshire terriers in the 70s and 80s but it wasn’t until 1984 that their Yorkie gave birth to a rather distinctly colored pup with a black, tan, and white coat. A few months later, the pup also conceived and brought forth a puppy with the same rare colored coat.

They kept breeding until they came up with a different breed which they named after themselves. When the couple passed away, other breeders in the US, UK, and other parts of the world picked up where the Biewers left causing a spread of the new dog breed.

The Biewer looks like the Parti Yorkie with two possible color combinations namely white, black, and blue as well as tan, white, and gold. The Biewer Yorkie is a Piebald/belted purebred Yorkie. Like the Parti Yorkie, both parents must carry the gene to give rise to a Biewer puppy.

Now that you have an idea of the Parti Yorkie and the Biewer, how do you establish which dog is right for you? Here is a detailed comparison between the two terrier dogs.

Yorkshire terrier dogs are lap dogs measuring about 7 pounds (3.2kg). As a member of the Yorkshire terrier family, the Parti Yorkie weighs exactly like your average Yorkie. The height is approximately 7 inches (17.8 cm). On the flip side, the Biewer terrier measures anywhere from 4lbs-8lbs (1.8kg-3.6kg) and stands at a height of 7in-11in (17.8cm-20.3cm).

This is what sets the Biewer apart. She is a tiny yet taller dog than both the Yorkie and the Parti Yorkie. If you have a hard time telling the difference between a Biewer and a Parti Yorkie, just take a look at their sizes. The former should be somewhat taller with a smaller body.

2. The Biewer Is A Distinct Breed

Despite looking alike in so many ways, the Biewer and the Parti Yorkie are not from the same breed. Granted, they come from the same lineage but the German terrier is a breed of its own while the Parti Yorkie is basically a Yorkshire terrier. The effort of Mr. and Mrs. Biewer to breed their uniquely colored dogs gave rise to a totally new breed. It took them a long time to produce pups with tan, black, and white colorations but they were patient enough to achieve their desired outcome.

Here’s another big difference between the Parti and Biewer Yorkies. As mentioned, the Parti Yorkie looks pretty much the same as the Biewer. This means she features the breed’s signature docked tail. Oppositely, the Biewer has a full-length tail. The reason is that tail-docking is an illegal practice in mainland Europe. Germany doesn’t allow it even on normal Yorkies. This is perhaps the most glaring difference between the two breeds.

For a long time, the Parti Yorkie was viewed as a low-quality version of the ‘true’ Yorkie. Many people and breeders alike didn’t want to be associated with the Parti-colored canines. Sadly, this led to the euthanizing of Parti puppies. Some gave away their dogs in secret. These Yorkie variants were on the brink of extinction once but a surge in population later saved the day.

Throughout the major part of the 1900s, euthanization of Parti Yorkies was a huge reality. However, the story changed in the 1980s when one breeder put their foot down and refused to kill their pups with different colors. Other breeders followed suit provoking the AKC to consider accepting the version. In 2000, the Parti Yorkie was accepted as an authentic Yorkshire Terrier variant.

As soon as the Biewer Yorkie became popular, the German version of AKC, the Allgemeiner Club der Hundefreunde Deutschland (ACH) registered the Yorkshire variant. In 2003, the Biewer became hugely popular in the United States. However, it wasn’t until 2014 that the dog registry added the Biewer as a Foundation breed. Still, puppies from the breed were not considered a pedigree despite their popularity. If you wanted your dog to be registered by the AKC, you would have to say that she is a Parti Yorkshire terrier instead. Luckily in January 2021, the organization agreed to register the Biewer as a distinct breed.

Biewer and Parti Yorkies descended from the Yorkshire terriers. As such, they have the same temperaments as your average Yorkie. They are energetic and happy dogs that don’t mind running around the house and yard and playing with people. Affection is synonymous with them. These Yorkie variants truly enjoy time with their human owners. Expect your doggie to welcome you home with the biggest smile and the most positive attitude after work. Because of how attached these Yorkie dogs are to their humans, they suffer from separation anxiety a lot. Barking and destructive chewing are often their outlets for anxiety. All in all, these are affectionate, playful, happy, loyal, and charming dogs.

Like Yorkshire terriers, Biewers and Parti Yorkies have long, silky coats that don’t stop growing. Yorkie lovers cannot get enough of the lush coat. As long as you keep grooming him frequently, your doggie will always look breathtaking. The opposite is also true. This type of coat is notorious for mat formation. Pet owners hire professional groomers to help them get rid of tangled, dirty, and matted coats. Apart from brushing their coats to make the coat look great, the face hairs should be tied in a knot at the back to give the dog a clear vision.

The beauty of both dogs is that they are hypoallergenic. Their silky hair resembles human hair which sheds very little. If you are particular about having a dog that doesn’t induce allergies, you can choose any between the two Yorkies. Sure, grooming her is not the easiest thing in the world but your family will be spared lots of dog hair.

Both Yorkie forms score very high in intelligence. After all, the Yorkshire terrier is one of the smartest breeds in the world. Teaching them new tricks is pretty easy. You will not have to repeat commands tens of times before the dog learns them. The only problem is that she can be rather stubborn. Yorkies are known for being headstrong and strong-willed. Without patience, dominance, and firmness, you will run into challenges training your Biewer or Parti Yorkie.

Like all other Yorkies, the Parti Yorkie and Biewer are generally healthy pups. They enjoy a long and healthy life of about 15 years. However, they are predisposed to several health complications. These include GI sensitivity, dental problems, diarrhea, and soft stools, progressive retinal atrophy, and patellar luxation. Take good care of your dog and visit the vet regularly to keep disease at bay.

The Biewer and Parti Yorkie look alike but they have slight differences. From origins to size to tail appearance, the two Yorkie forms differ in more ways than one. On the other hand, they have a lot in common. Before owning one, determine which dog fits you best.

Why Are Yorkies So Annoying? (Plus What To Do About It)