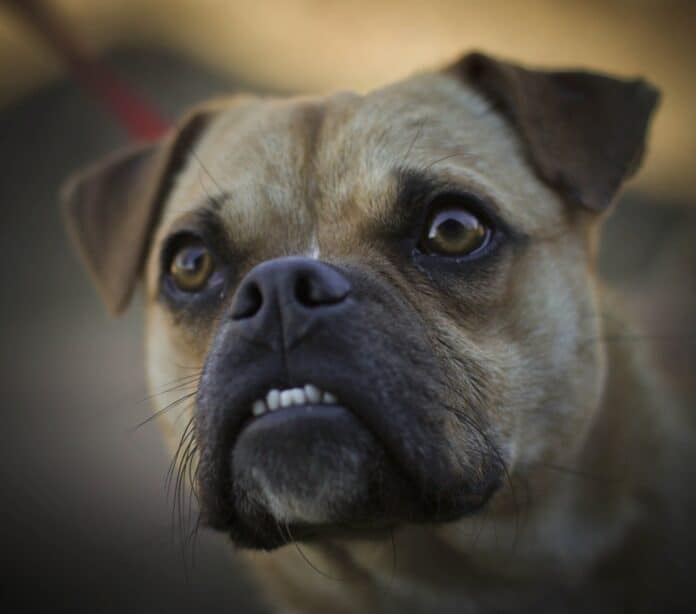 Dogs with underbites typically display a lower jaw that prominently protrudes out from underneath the upper jaw.

This causes a misalignment of the lower and upper teeth, a condition that vets often refer to as canine malocclusion.

The lower front teeth tend to be visible even when the dog has closed its mouth.

For some dog breeds, this is a distinguishing feature and even acts as an identifying trait.

With the toothy grin that these underbites give them, these breeds can look cute and endearing to pet owners.

However, others find them disturbing out of concern for their health. No doubt this comes from the fact that humans with the condition usually seek dental treatment.

From the pet’s perspective, however, underbites are not always the disaster humans imagine them to be.

Much of the time, they are quite happy and comfortable, as long it doesn’t get in the way of their chewing, biting, or breathing.

In other cases though, you will be advised by the veterinarian to get a correction done.

For the bulldog, particularly the English bulldog, the underbite is the quintessential mark. Its classic grumpy expression would not be complete without it.

However, this doesn’t take away one bit from their reputation of being admirable. The upset look actually belies an affectionate character that makes this breed a favorite of kids.

All bulldog breeds feature an underbite which seems a natural trait for them.

In most cases, no corrective action needs to be taken since they show no chewing problems.

Given their smushed noses and flattened facial features, it’s no surprise that many pugs also sport an underbite.

The underbites usually pose no problem to them and many people even find them incredibly cute.

Originally bred in China, this dog is a low-maintenance breed, sporting curly silken hair and a short dense tail.

It stands out for its well-developed chest with its head usually held up in an erect upright pose.

This small dog breed enjoyed an illustrious career as royal lapdogs in ancient China. They still retain their royal aura today judging from their elegance and royal bearing.

The underbite doesn’t always sit well with her as she is often challenged when trying to bite or chew.

It’s why it is recommended to get this dog a correction. For all their woes though, this breed makes an excellent companion and is also popular as a house pet.

This adorable dog, which comes down to us from the Chinese Ming Dynasty of 3 centuries ago, is a breed whose charm is hard to resist.

They depict a peculiar personality and are considered strong and intelligent. They are also a package of mischief and will give you tons of fun.

However, Pekingese dogs can sometimes show a bad temperament. They also tend to accumulate excess fur because they shed much less than other dogs.

From their underbite, you will usually see one or more teeth sticking out.

This cross between the English terrier and English bulldog is incredibly discerning of its owner’s moods and feelings.

Dubbed the “American Gentleman” due to its origin as an American breed, he’s easy to spot and recognize from his batlike ears.

These dogs were initially bred to be savage pit bulls but they are unrecognizable today for that role. Instead, they show a gentle and friendly disposition, with only occasional bouts of hyperactivity.

They usually sport a pronounced underbite although this is not obvious when their mouths are closed.

A likable and very compliant dog, this breed is often bred as a lapdog.

Due to their affability, they take a quick liking to people, including strangers.

Their adaptability is incredible being quite at home with energetic tasks like fetch or chase games, as well as being a couch potato to accommodate sedentary owners or seniors.

Spaniels aren’t that great when solitary, so they will usually signal their feelings with a nervous bark. They take their ties with humans seriously.

As a result, they make very good companions including as family buddies or at hospices and hospitals as therapy animals.

Despite their reputation of having perfect scissor bites, many spaniels do have underbites, some quite severe. In most cases, it’s a result of the condition failing to correct itself when they develop as puppies.

These tiny-headed dogs that also come with hilarious and highly expansive personalities are commonly afflicted with underbites.

As a result, you will often see their lower jaw teeth sticking out above their upper lip.

Chihuahuas often need early socialization and training because they can be feisty.

They are capable of giving you endless entertainment and fun with their exuberant nature.

These cuddly and cute breeds are a natural magnet for children. They are foxy-faced dogs with sparkling almond-shaped eyes that radiate with curiosity.

Although they are small, they don’t always act their size, often willing to challenge bigger dogs.

Their personality is immense, again in defiance of their size.

They are fiercely loyal to their families and also display great intelligence.

They come in solid colors that can range from orange to red, white, brown, blue, or cream.

Underbites tend to run high among Pomeranians as a genetic disposition.

This tiny dog breed has a history that stretches back to the ancient Tibetan Buddhist monasteries as indoor watchdogs. They combine a fierce nature with a warm, affectionate side.

Their sentinel past has made them stubborn and tough. Many Americans have eagerly taken to it, drawn by its friendliness and protectiveness.

They are notable for their tracking skill as well as strength and agility.

One thing that helps to tell them apart is the underbite which is usually always present in the Shi Tzu.

The Lhasa Apso will either have no underbite or sport a slight one.

The Maltese dog, which fits in the toy group, maybe small but it is a surprisingly agile competitor that also shows loyalty.

With their silky white coat and regal, elegant look, many people find them irresistible and noble.

He has an abiding love for human company and knows how to adapt perfectly to apartment or condo living due to his toy size.

When deprived of human attention, they suffer from separation anxiety which is marked by distressed howling and destructive behavior.

Maltese dogs are not always tolerant of kids or other dogs, especially when they have been over-pampered. For that reason, they don’t fit well in households with toddlers and little children.

The Maltese dog has a high genetic propensity for underbites as a purebred.

Known for its energy and strength, this popular dog has seen action in many challenging chores including as a police dog, a cattle dog, an athlete, and even as a war dog in the two world wars.

They move with a characteristic fluid and graceful style, living up to their name as athletes. Their athletic agility makes them a demanding dog to train.

Despite their aggressive side, they have an infectious playfulness that makes them fun with children.

Due to their fearlessness and loyalty, they are devoted watchdogs and defenders.

Boxers also do exceptionally well as a companion of children and a guide for blind people due to their patience.

Even though underbites are commonly found in small dog breeds, boxers which are large breeds also feature an underbite.

The puggle is a cross between a beagle and a pug. This cross ensures that some puggles won’t have underbites since the beagle parent has no trait for the underbite to pass on.

The puggles will nonetheless show the same adorable look as the Pug.

Puggles have an almost undiscriminating liking for everyone, so it makes a great family pet and companion.

Due to their friendliness, puggles don’t act as guard dogs and don’t usually fight other dogs.

When they bark, they may do so to alert you that somebody is at the door. Since they love people, puggles do best living indoors rather than outside.

There you have it; 12 dog breeds with underbites.

Generally, dogs have no obsession with their image, so unlike people, they most likely won’t need a cosmetic correction for their underbites.

Even so, many dog owners consider the underbite to be a compliment or enhancement of the dog’s appearance and would love to keep it.

However, if an underbite is causing your dog discomfort or medical issues, then arranging for that dental correction may be the right thing to do after all.

10 Dog Bowls for Dogs with Overbites

What Dogs Have Lock Jaw?