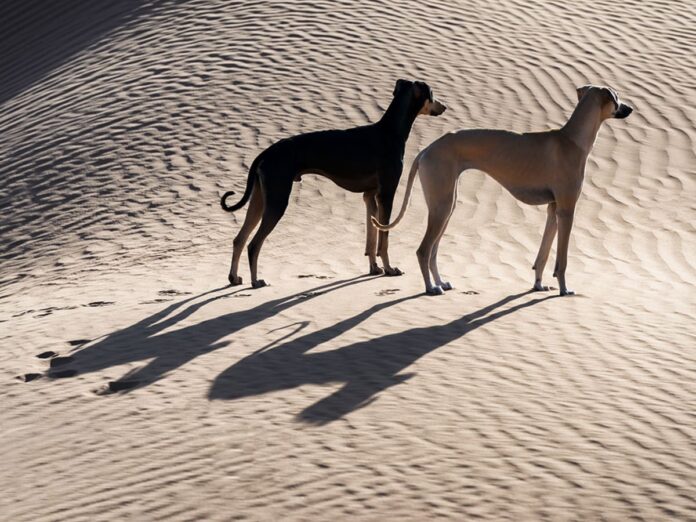 The Middle East is known for many things, one of which is being a crossroad of dog civilization. The region boasts a plethora of archaeological evidence of dog domestication as far back as 12 millennia ago. Israel, for instance, has an ancient burial site showing an old man cradling his puppy. This goes to show that the people of the Middle East have been dog lovers from time immemorial. Granted, it was central Asia that began domesticating dogs but the Middle East followed suit not long after.

Most Middle Easterners bred dogs to be hunting buddies as well as human companions. Their breeds can stand the blazing desert sun and everything about the wilderness. Now, the rest of the world has gotten to love some of the breeds from the Middle East. Here is a list of the lovable ones.

The athletic and elegant Saluki is the oldest dog breed known to man. The name is Arabic for ‘the noble dog’ and no doubt the Arabs loved this breed more than any other. Back when dogs were viewed to be unclean animals, a nomadic group of the Arab nation found the breed to be a gift from Allah. They prized the Salukis for their regal and athletic looks. They make such great hunters as they can run fast and trek long distances in the hunt. The breed has spread across the planet and dog lovers pay huge bucks to get one single puppy.

Related Post: How Much Does a Saluki Dog Cost?

As the name suggest, the Afghan hound originates from Afghanistan. The breed was originally called Tazi, a name given to them by the ancient people of the Middle Eastern country. Just one look at the breed and you will know that he is exceptional. When he walks into the room with many other dogs, he will instantly steal the attention. His dramatic silky coat, thin, fashioned model physique, and exotic face make him an instant showstopper.

The Afghan hound is not only popular because of his appearances. His affectionate, adaptable, and friendly character also make him a sought-after family pet. As long as you maintain a tight grooming schedule for his long-haired coat and offer his daily dose of exercise, you will have a wonderful companion in him.

Also known as the Bedouin Sheepdog or the Palestinian Pariah Dog, the Canaan Dog dates back to pre-biblical days. The breed originates from the Middle East particularly Jordan, Israel, Lebanon, Syria, Iraq, and the Sinai Peninsula. Measuring 40-55 lb (18-25 kg), this breed is medium-sized. He is athletic, fierce, and loyal no wonder the Bedouins used him to guard their camps and herds. With a dense and harsh outer coat as well as a close and profuse undercoat, this breed can handle the Middle Eastern heat with no issues at all.

The Pharaoh Hound is an ancient breed with an Egyptian Heritage. It is believed that he was around when Pharaohs ruled the land. He later made his way to the Middle East and Malta alongside Phoenician traders. The Maltese used the breed to hunt rabbits no wonder they call it ‘kelb tal-fenek’ which means ‘rabbit dog’. Middle Easterners and other people of the world utilize the Pharaoh hound for hunting and primarily as a pet.

While the Baladi Street Dog doesn’t necessarily have his roots in the Middle East, he is quite common in the region. Both the streets and countryside of this part of the world are filled with them. They must have found their way to Israel and other Asian countries from Egypt. The ears are pricked and large and the body slender and somewhat muscular. They may look less refined but these dogs make great companion dogs.

The Basenji is famous for being barkless. Rather than making noise like his counterparts, this breed does what is called yodeling to communicate. He may also scream on occasion. What many people don’t know is that this breed has roots in the Middle East. Sure, history shows that the Basenji originates from DRC in Africa but there is enough evidence to show that his ancient home is in the Middle East. To be more accurate, the dog came about after Middle Eastern village dogs bred with African breeds. It is safe to say that he is among breeds from Asia.

A Basenji is loyal, alert, and gentle. Sadly, he can also be very stubborn. You need tons of patience when training him. He is reserved with new people but loves making bonds with his owners.

Turns out the Middle East doesn’t only have massive oil reserves or has one of the biggest spice markets in the world. The people from this region also have a liking for dogs from way back when. This list goes to prove this point. If you are looking for a Middle Eastern dog breed, you have a number of options to choose from.