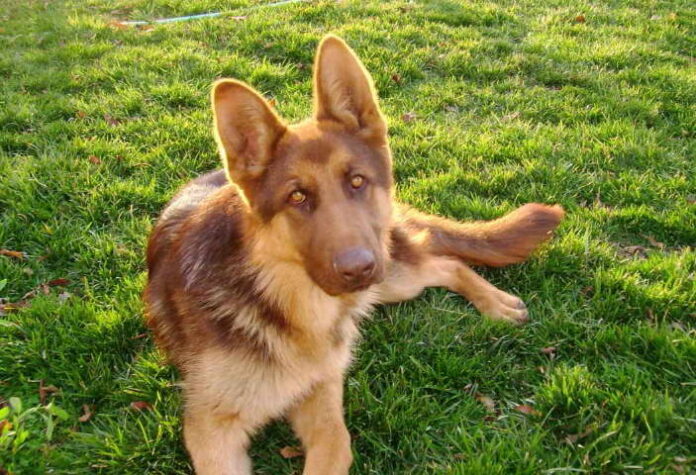 With a muscular body, terrific work ethic, and the smarts, the German shepherd dog breed has become a favorite in many American homes. Besides supplying endless love and hugs, you can count on him to stay by your side till death do you part. Blondie, Hitler’s famous dog is a good example of a GSD that stuck around until Hitler’s death in 1945. Before committing suicide, the German dictator fed his cyanide poison to his dog first to test if it did work. Suffice to say, the dog died soon after ingesting the poison. Whether it is protection, cuddles, or loyalty, a GSD will not disappoint.

Like every other dog breed out there, there are several color varieties of German shepherds. Most people are acquainted with black red/black and black/tan varieties. Others include silver sable, tan, solid black, red sable, solid white, tan and liver, solid liver, golden, blue, and panda shepherd. In this guide, we will focus on the liver-colored GSD. Here are some common questions surrounding this specific variety and their corresponding answers.

1. What is a liver German shepherd?

So, for a liver-colored GSD, all the areas that appear black in a black and tan or red and tan variety will now feature a shade of brown. This ranges from a light brownish color to a deeper one that looks reddish. The brown color appears on both the skin and fur including the nose, footpads, eye rims, nose, and lips.

Although adult liver German shepherds have a brown color throughout the entire skin, puppies tend to be a little different. Granted, the fur and skin is liver except for the toenails which are usually white and the footpads which come in pink. Once they become adults, both the footpads and toenails change to liver. In addition, GSD puppies have blue or green eyes which later changes to light brown (with a red hue) or amber when they turn six months.

3. What causes the liver color?

A liver German shepherd’s brown color is caused by a recessive gene called the B locus. Essentially, the gene occupies some loci (locations) on the chromosomes, ultimately dictating the pattern of the dog’s body. Canines possess different loci with some being more dominant than others. What the recessive B locus gene does is suppress the black color of the dog’s coat. As a result, the black becomes liver with the exception of the eyes.

The liver gene is passed down from the parent dog to the puppy. Apparently, the gene is a naturally occurring material within the German shepherd gene pool. For the puppy to have the brown color, both parents should have the gene and transfer it via the DNA material to the offspring. This is not to say that the parents of liver GSD must be liver-colored as well. As long as they have the B locus gene, they can cause coloring in their puppy.

The liver color is sometimes referred to as a dilute. Essentially, what this means is that the black color on the GSD has been diluted to appear more brown in the case of liver GSD—or to look more blue or grey in the case of a blue GSD.

It is worth mentioning that the liver gene doesn’t affect coat patterns. So, you can have:

A solid liver pattern implies that the dog has inherited two copies of the recessive black GSD pattern gene. The solid or self coloring gene pattern is not a black color gene per se. What it does is to bock the formation of black pigmentation, resulting in a solid Liver.

The short answer is no. The only color variations that are known to undergo significant color changes in GSDs are the sable and Black & Tan. Black & Tan GSDs are born black but the tan color only starts to show after about 6 months. Similarly, between the age of 6 months and 2 years, a sable GSD may get darker or lighter. The remaining coat colors in German shepherds do not change with age. In short, your liver German shepherd will live with his color for the rest of his life.

Most people can’t seem to tell the difference between the Isabella color of a German shepherd and its counterpart, a liver GSD. Granted, they have a close resemblance but they are not altogether equal. Isabella German shepherds have a fawn color and are referred to as “diluted livers” or “double dilutes”. Unlike a liver German shepherd with one recessive gene, an Isabella GSD carries two copies of the infamous blue recessive gene as well as two liver gene copies. Both come at play during pigmentation. First, the liver gene prevents pigmentation resulting in a brown color. Next, the blue gene dilutes the resulting brown color giving it fawn color with a liver or pink nose. Some Isabella breeds have a dark gray nose. Physically, an Isabella has a rather light brown (fawn) color compared to a liver GSD whose color is deep brown or reddish.

6. Does color affect a GSD’s character and temperament?

From the above information, the recessive gene alters the coloring and pattern of a dog’s coat and fur only. Every other part of the dog is pretty much the same as the other varieties. The fur on the coat stays the same. Therefore, don’t expect to have a dog that doesn’t shed just because he features a different color. Additionally, he will suffer from separation anxiety like all other GSDs and require a lot in the way of exercise. On the other hand, your liver-colored German shepherd will enjoy cuddling, playing, and working. You will get plenty of love and devotion as well as good sociability skills.

7. Any Health Problems I Should Know About?

The answer is no. The health of a GSD has nothing to do with its color. If you think a liver-colored coat tickles your fancy, go for it. However, you should be careful when choosing your puppy. Some breeders are known for practices such as inbreeding and overbreeding, both of which can cause detrimental health concerns in any dog.

Generally speaking, a German shepherd is a healthy dog. If cared for properly, he will enjoy a long, disease-free life. However, there are a few health-related problems that this breed is predisposed to. Obviously, the health of a dog depends on his size, work type and level, the care offered, and pure luck. These include:

To ensure optimal health for your dog, be sure to offer him a balanced diet to boost his immunity. It is also your responsibility to be up-to-date with all his vaccinations. Finally, keep a close eye on your Fido. If something is amiss health-wise, bring him to your pet pronto.

8. Does the AKC recognize liver GSDs?

The American Kennel Club has set rules and regulations regarding acceptable dog breeds. They use these to determine whether a dog should be certified by them or not. Often, they do this to ensure moral standards of breeding dogs are adhered to. Being recognized by the AKC means your dog can participate in sporting events among other benefits.

Typically, there are six colors and five color patterns of the German shepherd breed recognized by the AKC. These colors include black, grey, blue, sable, liver, and white while the patterns are black and cream, black and tan, black and red, bi-color, and black and silver. AKC insists that they favor “strong rich colors” over “pale or washed-out colors”. White is sadly disqualified as a breed standard claiming it is a danger for breeding. This is because of the absence of pigmentation which can mean weakness genetically.

The liver, cream, and blue varieties are termed as “faults” by the breed standards in the show ring. Thankfully, a liver-colored GSD is recognized by the AKC. It is worth noting that although the AKC recognizes liver GSDs, it is specific on the pattern. The color has to be solid liver. Any other patterns such as black and liver or liver and tan aren’t acceptable as breed standards.

9. Where can I get a liver GSD puppy?

If you are sold out to the beautiful color of a liver GSD and want to be a parent of one, you need a good breeder to buy your puppy from. Since it is a rare color, it is highly unlikely that this variety can be found in dog shelters. However, you may be lucky, so look around and find out if you can adopt one.

If you go the breeder way, you want to work with a reputable individual with comprehensive health information of the puppy. According to the Canine Health Information Center (CHIC), all GSDs should be tested for the following:

A good breeder should be able to do all these pre-tests before selling a liver-colored puppy. This information helps pet parents know what to anticipate during pet ownership.

Liver German shepherds are rare. Ultimately, they cost more than your black/tan or red/black varieties. Although they are available in regular breeding programs, they are mostly a result of specialty or designer breeding programs. On average, expect to part with anything from $500 and $1500 for a liver German shepherd puppy. Those with detailed information like proof or regulated breeding history, specific titles, or working titles cost upwards of $2500.

As aforementioned, the only thing that is different in a liver GSD is the color. Every other part of the dog is pretty much the same as the other German shepherd varieties. Having said that, GSDs make great family dogs—whether it is protection, love and devotion, cuddles, loyalty, working ability, excellent social skills, or intelligence and trainability, a GSD will not disappoint. However, like any other breed out there, this breed comes with challenges of its own. For instance, you should be ready to deal with shedding, high exercise requirements, separation anxiety issues, and dominance.

Hopefully, this guide has answered some of the questions you had regarding a liver German shepherd. The bottom line is that this variety looks like all the other German shepherd varieties save for his coat color. If you love the liver color so much, there’s no need to hold back. Get a good breeder and kick start the process of pet ownership.