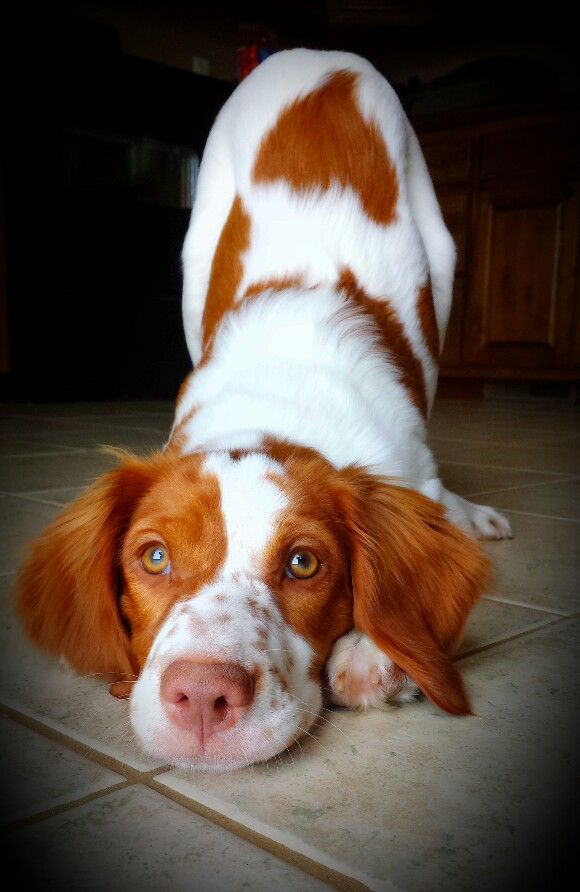 Perhaps you have red hair and would love to have a red-colored dog to twin with.

This way, you can take countless selfies with him and plaster them on social media.

Or, maybe you just have a thing for red and white dogs because these are your favorite colors or you just think that the combo is good on a dog.

No matter where you lie, red and white dogs are very much available.

We have a list of the 12 leading ones for you. These beauties are some of the cutest.

Choosing one will be the hardest thing for you to do. Don’t say we didn’t warn you.

The Australian shepherd or Aussie is a herding dog with looks to die for.

A red and white Aussie has a red coat with some white patches on the chest, neck, and front paws.

Red merles have both white and red as well.

It is worth a mention that Aussies are one of the few dogs with different colored eyes–a trait that makes her truly unique and special.

The Welsh Springer is a medium-sized English dog with looks resembling those of Cocker spaniels and English spaniels.

The breed happens to be one of Britain’s old sporting breeds with dashing looks.

His weight and size are somewhere between the two aforementioned spaniels making him of medium size.

The breed is available in red and white only which is the standard color.

With a thick coat and a fox-like face, the Shiba Inu is canine eye candy.

His chubby, well-proportioned body, plump and fluffy backside and elegant trots all add to his beauty in one way or another.

His cheeks are wide and enlarge his smile to make him look happier than your average dog.

When he smiles, he attracts all the attention in the room.

Shibas come in various colors such as sesame (red background and black-tipped hairs), and cream.

The coat is double-coated like that of a Siberian husky.

The Akita has a close resemblance with the Shiba Inu. If you don’t know much about both breeds, you are likely to confuse them.

The coats are similar in fur length and colors. Both breeds also have fox-like appearances, wide smiles, cute bodies, and unique walking styles not to mention that they both originated from Japan.

However, the Akita is much larger weighing up to 130 pounds in contrast to ShibaInu’s average weight of only 23 pounds.

Also, Akitas are a tad challenging to own than Shibas. They are stubborn, hard to train, strong-willed, and not very social.

They may appear cute but they are certainly not the most ideal dogs for first-time owners.

Forget about the all-red Irish setter that many people know about. This is another rare breed of its own.

He has both red and white colors on the coat but a bulk of the coat is white with red patches.

The red ranges from chestnut red to deep mahogany. His coat itself has silky and shiny fur with the length being varied.

Often, the head has short and fine fur while the ears, stomach, and back of the legs feature long strands of fur.

As for its temperament, the Irish red and white setter is loyal, devoted, playful, energetic, reliable, and affectionate.

The Korean Jindo is a rare but cute dog revered for his intelligence, loyalty, beauty, and boldness.

It is quite popular in his home country of Korea where he is put to work as a hunting companion and a loyal pet.

With a high level of intelligence and loyalty, the breed excels in both roles.

He can be pretty stubborn before training but as the sessions catch up, he will transform into a great canine.

He also does wonders during agility events and makes a good pet at home.

The Nova Scotia duck trolling retriever or troller is a pleasant long-haired breed with red and white colors on his coat.

This one was bred to retrieve waterfowl from icy waters.

With such a job description, he needs all the fur he can carry around.

The double coat is dense and of medium length—just perfect for the dog.

Trollers are active and playful. If you have kids at home or need a dog to help you stay on your feet, this is the one to get.

Described as the African barkless dog, the Basenji does not make a noise like his counterparts. Instead of barking, he makes a unique noise called a yodel.

The breed is also famous for being a clean freak. He compares closely to a cat in this department.

With him, be sure you will not have odors unless he rolls in smelly mud or something.

Basenjis are also cute thanks to their well-formed bodies of different colors, sweet pointy ears, and a tail that curls at the end.

Although not the most common coat color, red and white Basenjis exist.

This specific color is called deep chestnut red but others call it dark tan, beige, or orange.

Either way, the chest, neck, and front legs are pure white.

What’s It Like to Own a Husky Basenji Mix?

What’s It Like To Own Basenji Rat Terrier Mix?

This Pitbull-type canine is also one among many canines with a red and white coat.

This one is predominantly white with some red on the head, back, and backside.

It is a rare color though with many of them being fawn, brindle, black, brown, and sable.

Unfortunately, like other Pitbulls, this dog, has a bad rap. Many people believe that he is aggressive and fierce—attacking even those he loves.

Well, you have to own one to know that he is just as affectionate, loyal, and lovely as other dogs.

You have to treat him right and you will get the best from him.

As a toy breed, the Papillon is a favorite for people who have a heart for small, hairy dogs.

No doubt, this little sweet canine will fill your life with so much fun.

He has a head full of fur and a smile that melts even the hardest of hearts.

The fact that she can fit in a handbag makes her even more popular.

Papillons come in a variety of coat colors such as white, red and white, black and white, sable and white, and white and chocolate.

You must be shocked to see this entry on this list. The average Border collie has a black, white, black & white, blue, liver, or blue coat.

Red and white is uncommon but it sure is available. In this case, the coat is largely red except the mouth area, middle of the face, chest, and front legs.

The most famous Alaskan dog breeds include the Husky and the Malamute.

However, there are two more on the list—the Alusky and the Klee Kai.

The last one shares striking features as the rest of them. The major difference is that he is much smaller (only weighing less than 20 pounds) than other sled dogs.

The term “Klee Kai” is Inuit for “little dog”. Because of his size, this dog was bred to be a companion. She sure has the looks and character for it.

Love white and red dogs? You have a large pool to pick from.

Narrow down your search based on which ones melt your heart the most.

No matter the choice, be guaranteed of a genuinely good-looking dog by your side.

12 Striking White and Tan Dogs to Own