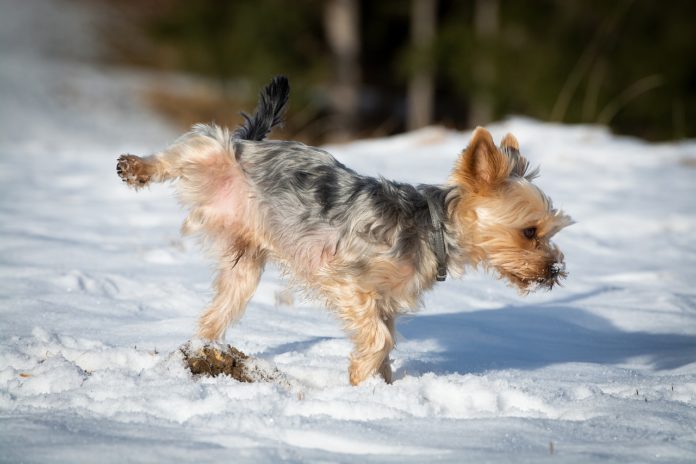 Dogs aren’t very picky when it comes to eating. Most dogs will be happy to shove your spicy rice, guacamole, or cake down their throats if you offered it to them. While a good number of dogs can get away with this, there are some dogs that will suffer terribly for consuming anything and everything. You know your dog has a sensitive stomach if he has bouts of diarrhea and vomiting when you change his foods. Some become gassy and resort to eating grass to settle their tummies. It is an unpleasant and unsetting thing to witness as a dog owner.

Having a sensitive gut is more of an individual occurrence. However, some dog breeds are more prone to it than others.  Here is a quick overview of the top 20 dog breeds that are prone to sensitive stomachs.

The Scottish terrier is popular for having a sensitive and independent character. He is often referred to as “a big dog in a small body” primarily for its serious and grumpy attitude. Out of all dogs with sensitive stomachs, this one is perhaps the most predisposed. Blame it on their short-digestive tracks that don’t do so well with plenty of foods including plant and animal proteins, grains, and fiber-rich foods. Most Scottish terriers are susceptible to food allergies and would itch, vomit, and lick their paws non-stop.

With a deep narrow chest, a Labrador Retriever is prone to a condition known as Gastric Dilatation and Volvulus (also called GDV or Bloat). This is where the gut severely dilates causing a lot of pain. Dogs with this problem suffer a range of digestive problems with symptoms such as gas, a failed attempt at vomiting, and diarrhea. If you are hoping to get a Lab soon, be sure to examine his reactions to different foods and adjust accordingly.

A Great Dane is a giant dog with lots of love to give. Unfortunately, like the Labrador Retriever, he is also at risk of GDV which happens to be the number one killer of Danes. Due to his physique and size, his stomach has a tendency to twist and trap air inside. It takes a special diet that is free of grains and high protein foods to deal with stomach sensitivity among Great Danes.

Loyal, trainable, and obedient are a few terms used to describe the Miniature Schnauzer dog breed. Sadly, most Miniatures Schnauzers suffer digestion problems as a result of an inherited metabolism disorder. They may develop inflammatory bowel disease called chronic colitis or have a weak biliary system. The two leading digestive issues among Miniature Schnauzers are hemorrhagic gastroenteritis and pancreatic.

Famous for wrinkles, the Chinese Shar-Pei is yet another dog breed that is prone to a sensitive stomach. As a large-sized dog, he has a deep narrow chest which means he is predisposed to Bloat. Inflammatory bowel disease is also common in the breed as is food allergies. A Shar-Pei with a sensitive tummy will give allergic reactions such as scratching, itching, and redness.

A Yorkshire Terrier or Yorkie is notorious for pancreatitis. This is a situation where the dog’s pancreatic enzymes digest the pancreas. The actual cause of pancreatitis in Yorkies is unknown but a few possibilities point to genetics, medications, dietary issues toxins, and excess fat in the blood. Yorkshire terriers are also prone to hemorrhagic gastroenteritis (HGE) which is a form of diarrhea. This can be quite fatal for such a tiny dog breed.

Shi-Tzu is a Chinese term that means ‘a lion dog”. No doubt, these little canines have a personality of their own. Regrettably, they are genetically susceptible to a number of health issues, one of which is pyloric hypertrophy, a disease affecting the stomach musculature. This problem causes a reduction of the outflow and consequently the backup of ingesta in the abdomen. The result is abdominal pain associated with vomiting.

Although strong, intelligent and fearless, a German Shepherd is predisposed to a number of digestive issues. Ideally, this dog breed has a sensitive digestive system that is less efficient compared to other breeds. Most of them get tummy upsets soon after eating something that doesn’t agree with their gut. Thanks to their deep and narrow chests, German Shepherds are also at risk for bloating.

The Irish Setter is known for being lean, tall, and gluten-intolerant. Most dogs in this breeds suffer enteropathy (a disease of the small intestine) when they consume grains such as rice, barley, wheat, oats, and rice. Enteropathy causes the mal-absorption of essential nutrients such as iron and calcium. Bloat and inflammatory bowel disease are also common with Irish Setters.

Basenjis are popular for their sturdy builds and long legs that make them great sprinters. But like Irish Setters, these dogs are susceptible to enteropathy or malabsorption. Instead of absorbing nutrients, they would flush them out of the body through the urinary tract. This causes an electrolyte imbalance and eventually, kidney failure.

A soft-coated Wheaten Terrier is a bouncy, enthusiastic, and fearless watchdog. For the most part, this dog breed enjoys a clean bill of health but the breed is likely to develop inflammatory bowel disease. This is where the stomach lining becomes overwhelmed with plasmacytes and lymphocytes, making it hard to absorb nutrients properly. In addition, diarrhea and chronic vomiting are also common among Wheatens.

Most Lhasa Apso dog breeds have a condition called Pyloric Stenosis. The pyloric is technically the passage used by partially digested food from the stomach to the small intestine and later to the intestine. Stenosis occurs when the passage becomes narrow to a point that food is stuck in there. The symptoms of this disease include lack of appetite, weight loss, and severe vomiting. Other digestive problems among Lhasa Apsos are inflammation of the bowel and colitis.

Bloat is a common problem in boxers. In mild cases, the disease can cause symptoms such as minor discomfort – much like the feeling you get when you overeat. In worse cases, the tummy will increase in size and graduate from bloating to gastric torsion. This is where the tummy comes so huge that it ends up twisting and cutting off blood flow. Boxers are also predisposed to pyloric stenosis, pancreatic, and inflamed bowel disease.

In regard to stomach sensitivity, the Poodle is notorious for irritable bowel syndrome. This condition can cause symptoms such as stomach cramps, flatulence, presence of mucus in the stool, constipation, and diarrhea. Although less common, bloat is also a possible cause of concern in poodles. When it happens, surgery is the best option to ease the pain and bring the stomach back to normalcy.

Cancer is perhaps the number one killer among Golden Retrievers but bloat follows closely. Being a batter-chested dog breed, a golden retriever’s stomach fills with gas, food, and fluid quite easily and stops blood flow or causes some sort of damage in the tummy. If left untreated, the stomach can turn around sending the dog into shock and thereafter death.

The playful, energetic, and intelligent collie is also at risk of developing the deadly bloat at some point in his life. This condition is quite deadly and can kill the dog in as little as thirty minutes. Symptoms of bloat include restlessness, an attempt to pass stool with no success, and an enlarged abdomen.

Like the Collie and Great Dane, the Weimaraner dog breed is deep-chested and thus a candidate of twisting of the stomach from time to time. Gastric torsion causes the blockage of the esophagus and the intestine and puts the dog in great danger. Keep an eye on the symptoms of bloat as suggested in this guide especially after heavy meals.

With a weight of 65-115 pounds, the Akita is a massive breed known for its undying loyalty. In addition to eye problems and allergies, Akitas also have a high disposition to stomach sensitivity, particularly bloat. The risk is not as bad as in Great Danes, Irish Setters, and Weimaraners but being large breeds, Akitas have a likelihood of suffering from bloat.

This dog breed may be a striking and stunning creature but he is also predisposed to gastric torsion. Gas can easily fill his stomach and cause it to expand to the extent of cutting off blood circulation. This can occur if the dog eats his meals too fast or eats too much food in one sitting.

A basset ground is low to the ground. One would,  therefore, imagine that he cannot suffer from bloat. Well, the truth is that the shape of this cute dog breed lends itself very well to this fatal problem. So the next time you see your dog in pain or trying to puke after a heavy meal, you might want to call your vet pronto.

Stomach sensitivity is not an easy thing to deal with. Without intervention, it can be fatal, especially in the case of bloat and gastric torsion. If you have any of the dog breeds above (or planning to get one), be aware of the lurking danger and watch out for any signs.