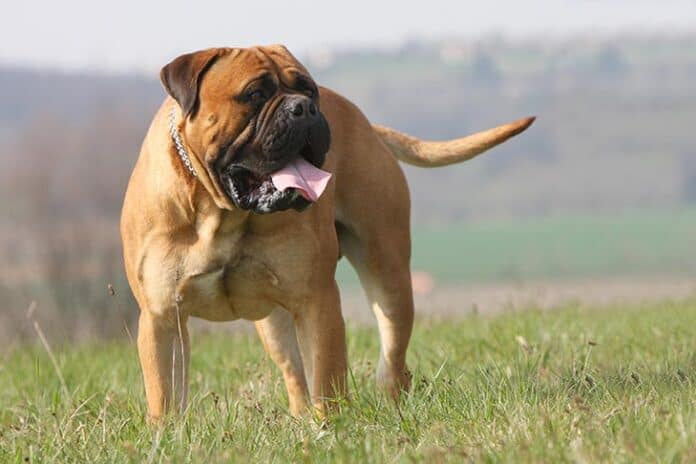 The Bullmastiff is a massive, powerful breed with the look of a fierce, cumbersome dog. However, underneath all those enormous muscles and an intimidating expression is a sweet giant. He is calm and devoted to the people he knows and loves. Sure, he can be wary and suspecting of strangers but that’s because he is a protective breed of dog.

By welcoming him to your home, you are looking at years of nothing but bliss, joy, happiness, and all the good things dogs bring to their owners. Speaking of years, just how long do Bullmastiffs live?

According to a survey done in the UK, Bullmastiffs have an average lifespan of 7.5 years. AKC puts the figure at 7 to 9 years which is not far from the survey’s findings. If you are lucky, your dog will surpass the 9-year mark. On the other hand, it’s not uncommon for a bullmastiff dog to live for less than 7 years as well. It all depends on factors such as nutrition, exercise, socialization, spaying/neutering, weather conditions, mental activity, and medical checkups.

This breed clearly has one of the shortest lifespans in the canine kingdom. Other breeds like the Bordeaux beat him on this front thankfully but a bullmastiff doesn’t stick for a long time. Universally, tall and large dog breeds have way shorter lifespans compared to their short and tiny counterparts. The reason is that large dogs age faster. Their bodies also experience age-related decay much earlier than tiny breeds.

Why Do Bullmastiffs Have Shorter Life Spans?

The lifespan of a dog primarily depends on its size and quality of life. If the dog is fed the right diet and taken care of, he will live to a good old age. Still, you cannot compare the lifespan of a small dog like a Shih Tzu to that of a much larger and taller breed like the Mastiff. It has to do with the aging process. Research has shown that there’s a direct link between size and age. Larger dogs do age quite faster than smaller breeds.

A lap dog like a Cocker Spaniel will be considered mature at the age of two years. By then, she will be 30 pounds while your typical Bullmastiff of the same age will already have reached 180 pounds. When you look at both dogs, the former will have aged way less than the latter and will be exposed to age-related medical issues. In addition to size, a high risk for several health complications is also to blame for the short lifespan of bullmastiffs.

How Old Is The Oldest Bullmastiff?

While most Bullmastiffs don’t manage to live past 12 years, some just defy odds. One such canine is the famous Kush that lived to a ripe age of 15 years between 1994 and 2007. The female Mastiff dog lived in Australia under seemingly very lovable and responsible parents. She managed to live that long because of the kind of diet she consumed all her life. Her owners would offer her a very strict diet consisting of raw meat, bones, vegetables, and herbs. They believed in feeding their pup a diet that resembles that of wild dogs. Additionally, Kush never saw the inside of a hospital, meaning she wasn’t exposed to chemicals and antibiotics. With a clean bill of health and a record of giving birth to 60 pups, Kush’s parents sure did a good job of raising her.

Do Bullmastiffs Have Health Problems?

Yes, Bullmastiffs are prone to several health conditions. Some of the most common ones include joint and structural problems, eye diseases, heart conditions, cancer, and bloating. These dogs may also suffer from hip dysplasia if their thigh bones aren’t attached to the socked as they should. If not treated, this can cause arthritis.

What Do Bullmastiffs Die From?

If you are looking to own a Bullmastiff, be sure to take good care of him including having him checked by the vet often. This way, you can catch any signs of disease early enough and do something about it. Bullmastiffs typically die from a number of conditions including the following:

How Long Do Bullmastiff Crosses Live?

Mixed dog breeds don’t have a specific lifespan per se. Often, you will have to use the weight of the canine to know how long he or she will live. As usual, the smaller the dog the longer the lifespan, and the larger the dog the shorter the lifespan. With a rough idea of the lifespans of both breeds, you should be able to predict your dog’s lifespan.

Happy, go-lucky, protective, and friendly, the Bullmastiff is a delightful pet. Even with an amazing bone structure, strong muscles, and a ton of weight to throw around, this breed has a short lifespan of 7-9 years. To make sure he lives to his rightful age, be sure to take proper care of him through diet, exercise, vet check-ups, and more.