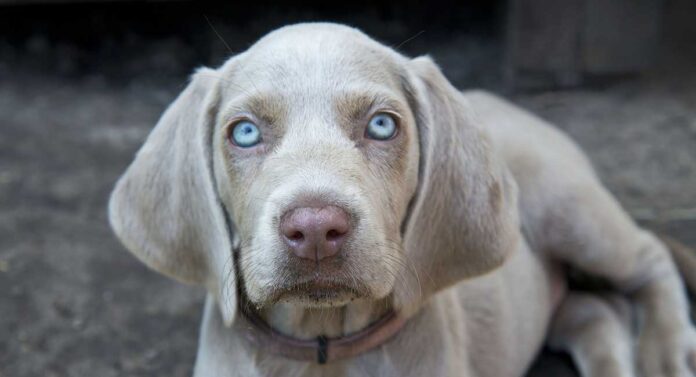 A blue-eyed dog is considered to be sophisticated and beautiful. If you don’t believe us, ask any breeder or your local dog rescue center.

Most puppies with blue eyes are picked faster than their brown or black-eyed counterparts.

Getting a dog with blue eyes and a gray coat is like hitting a jackpot. The color combination is very rare which means your fur baby will turn heads everywhere he goes.

Whether he comes in an ashy shade, deep charcoal, or anything in between, his beauty will blow your mind.

If you are looking for such a dog, we have a list of 12 grey dog breeds with blue eyes.

The Weimaraner is a celebrated hunter in Germany and the world over.

With exceptionally high energy, he can leap over mountains, make long strides, hike all day, and run on rough terrain just to follow after prey.

This breed was actually bred to hunt big game, so going after rabbits, birds, and ducks is a piece of cake for him. He is tough, courageous, athletic, and has impressive stamina.

Some people call Weimaraners ‘gray ghosts’ because of their sophisticated silver-gray coats.

Some also have grayish-blue eyes that blend well with the coat.

The blue eye color gives the canine sort of an animated, beautiful appearance that dog owners love so much.

The Siberian Husky is one of the breeds with unmistakably blue eyes.

The breed standard requires almond eyes that are either blue or brown in color.

Both eyes can be brown or blue. One can also be blue and the other brown or one eye may feature both colors.

This endurance breed boasts a beautiful double coat with colors ranging from pure white to blue.

When you combine the color of the eyes and that of the coat, you end up with an insanely good-looking canine.

To round things up, Siberian Huskies are also gentle, brave, adaptable, and enthusiastic.

No dog breed beats the Australian shepherd when it comes to herding.

He can go to great lengths just to make sure his herd is safe and sound. This means using skills such as elbow and hip throwing to control sheep and cows.

Great skills aside, some Aussies have merle coats which can assume the distinctive gray color. In such a case, blue eyes are almost always given.

Not all merle Aussies have blue eyes, though; just a majority of them.

Other eye color possibilities include amber, brown, or any combination of the two.

Is Sheltie Aussie Mix the Right Crossbreed for You?

The Old English sheepdog is one among many beautiful fluffy white and grey dog breeds.

He only weighs 60-100 pounds but his fluffy coat gives him the appearance of a very big canine.

He is patient, smart, courageous, and loyal, no wonder he is loved in the United States and the entire planet.

His eyes are mostly brown but if you are lucky, you will find one with blue eyes as well.

Unlike most dogs with grey fur, the Chinese crested literally has no fur on his little body.

He only has a few patches here and there (especially the neck, head, socks, feet, and ears).

However, his skin can be available in a beautiful gray color.

With very little fur on the body, this breed has minimal grooming requirements.

Most grey Chinese crested dogs also have blue eyes which give them an air of beauty, charm, and elegance.

This gentle giant often comes in colors such as black, fawn, blue, harlequin, and white with black dots all over the body.

However, he may also have a merle coat if he carries the M-locus gene.

Merle coats are quite common with many having solid gray coats or grey with black spots on the body.

All Great Danes have blue eyes at birth but many change as they grow up.

The American Pitbull terrier comes with brown eyes. Still, genetics and pigmentation can alter the color.

If your pittie comes from a family of blue-eyed dogs, he will likely have the same eye color.

Often, the Merle gene (M-locus) is responsible for carrying the random pigment that causes the lightening of certain areas of the do including the fur, eyes, and nose.

Other times, the melanin levels of the dog may also impact his eye color.

While most blue-eyed pitties enjoy a rich long life, some sadly suffer from deafness, albinism, and blindness.

The French bulldog is everyone’s favorite toy dog. He is calm, laid-back, and affectionate.

To make him happy, all you have to do is give him enough food and a good place to rest his head.

A walk around the block a few times a week will do it for his energy needs. What more can you want in a dog?

Frenchies are available in various coat colors such as brindle, white cream, brindle and white, fawn, fawn and white, cream and white, and more.

Rare colors include blue, Isabella, and lilac. These are very attractive and set them apart from the crowd.

The eyes can also be blue if there is the presence of M-locus and S-locus genes.

The former is common in merle Frenchies and the latter in piebald varieties.

If the dog has a recessive gene, he will also be blue-eyed. The gene determines whether one or both eyes will bear the blue coloring.

If you are looking for a sleek and compact dog, the American bully fits the bill.

Besides looking good in photos, this breed also performs very well in competitions.

Plus, he is easy to groom and maintain, affectionate, peaceful, and great with kids.

As a close cousin of the American Pitbull terrier, you bet he has that intimidating look and tenacity that makes him a great watchdog.

American bullies come in any color. And they can have blue eyes too.

In fact, puppies from this breed have those sweet, innocent blue-eyes that we love so much.

As they grow up, most lose the color as melanin increases. If the dog has the merle gene, one or both of his eyes will remain blue for life.

This exceptional herding dog from the British Isles is famous for his intelligence. He is actually at the top on the intelligence scales according to many dog experts.

Whether you want him to grasp commands in no time, learn how to rescue a baby, or determine whether fighting with a neighbor’s dog is worth his time or not, a Border Collie will never disappoint.

While not all Border Collies have blue eyes, it is not uncommon to come across a blue-eyed dog from this breed.

Often, those with the infamous merle gene (those with diluted coats of darker colors), feature blue eyes.

Sadly, if both parents of the Collie have the merle gene, the offspring runs the risk of being deaf or blind.

Thankfully, most blue-eyed gray Collies enjoy a long healthy life like most other dogs.

Determined, tough, and brave, the Dachshund was bred in Germany to hunt vermin and badgers.

His unique sausage-shaped body makes it possible for him to work underground while his elongated rib cage helps him process air efficiently.

To make quick and easy movements, he must have short legs.

Some have the merle gene which displays as light-colored patches against the normal dark base color.

Some merle patterned Dachshunds have blue eyes too, either partially or completely.

No matter the color of the coat or eyes, expect nothing less than extraordinary beauty, high energy, and bravery from your Dachshund.

Last but not least, the Shetland shepherd dog or sheltie can also have a gray coat.

Like many dogs on this list, the merle gene is responsible for causing pigmentation on the canine’s face and coat.

The gene may also cause the eyes to take on a blue color.

In most cases, a Sheltie will have one blue eye with the other being brown or amber. In rare circumstances, both eyes will be blue.

Clearly, there are quite a number of grey dog breeds with blue eyes.

Each one comes with his own distinct temperament, appearance, grooming needs, and health issues.

Once you have a clear picture of the kind of dog you desire for your family, choosing the best from this list will be a walkover.

12 Striking White and Tan Dogs to Own