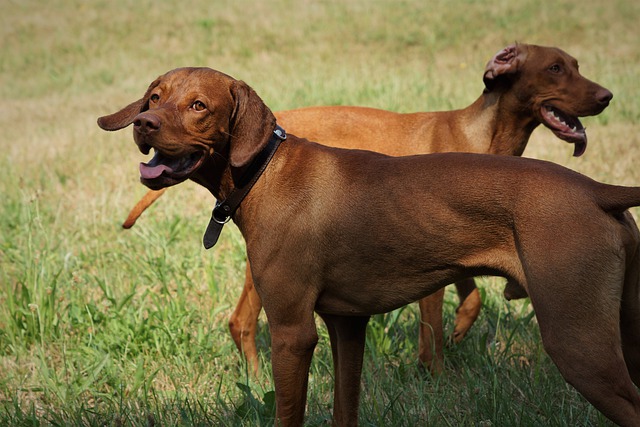 Once the star of sporting nobility in Hungary, the Vizsla has transformed into an affectionate and charming family pet.

He is gentle, polite, and docile. If you want him to go for a walk, take part in a sporting event, or simply cuddle, just say the word and watch him surpass your expectation.

With all the charisma, intelligence, resilience, work ethic, and beauty, it is no wonder Vizsla crossbreeds are springing up everywhere these days.

As a mix of two purebred dogs, they offer sought-after qualities that purebreed dogs may not have.

For instance, vizsla crosses have increased vigor. Crossbreeding in dogs limits the likelihood of inheriting pre-existing genetic diseases. This can go a long way in boosting the strength and vigor of the resulting crossbreed puppies.

Besides, with so many possible combinations, each vizsla mix is as unique as the next.

Every time two purebred dogs mate, it is literally a coin toss when it comes to how their puppies will turn out, especially in terms of personality and appearance.

There are a number of Vizsla mixes out there currently. Here is a conservative list of 12 popular ones and what owning one means.

When you combine the Weimaraner and Magyar Vizsla, you end up with a beautiful and affectionate designer dog called a Vizmaraner.

This dog is so affectionate that it has been nicknamed the “Velcro Dog”. He cherishes human company to the extent of being clingy.

A Vizmaraner weighs more than 65 pounds and stands up to a height of 22-33 inches.

With a short sleek coat of either a gray color of the Weimaraner or the Vizsla’s gold-rust, you bet a Vizmaraner is easy on the eyes.

He is intelligent and easy to train. You won’t have to repeat commands a hundred times before he picks it up.

Thanks to his short-haired coat, this crossbreed is a light shedder. With occasional brushing, the coat will stay neat.

The only downsides to owning a Vizmaraner include separation anxiety, high-energy requirements, and stubbornness (which can be solved by firm training).

The Labralas, also referred to as the Vizslador, is a cross between the Hungarian Vizsla and the Labrador retriever.

Both the parent breeds were bred to hunt game. The former was specifically trained to point and the latter, to retrieve game.

Together, they make a wonderful hunting and gaming companion designer dog.

Based on the weight of the Vizsla and Labrador retriever, the male crossbreed will weigh about 80 lbs with females staying in the 50-70 lbs range.

As for the color, a Labrala puppy might have chocolate, yellow, or black coat color of the lab or the signature rust-colored coat of a Vizsla.

The Vizslador is highly intelligent and focused. He is also known for working closely with his owner to achieve great goals.

Whichever line of work you put him in, he will try his level best to put a smile on your face.

He is also likely to be very energetic, intelligent, and social.

Quick learner, obedient, good stamina, and vigilant, the German Wirehaired Pointing Vizsla is a great pet to own.

He is a gentle people-pleaser and a great watchdog. And like most Vizsla mixes, this dog is a natural hunter.

He has high energy demands that can be overwhelming to most people.

The body is muscular and heavy with flopped ears and a deep, wide chest.

This dog also has a dense outer coat and a softer undercoat.

Here’s another designer crossbreed between the Vizsla and the American Staffordshire Terrier.

Despite weighing 50 pounds, this dog doesn’t mind being a lap dog if you let him.

He has a jovial and friendly personality and lots of energy to expend.

Being highly social and gentle, a Vizsla Staff gets along with small children, old people, and other pets if trained well.

Training him is easy, occasional brushing of the coat does the job, and barking is minimum.

Except for a few health concerns, this dog is generally healthy. All in all, he makes for a wonderful pet at home.

The Transylvizsla is a combination of the Vizsla and the Transylvanian Hound.

He is a medium-large athletic dog with a sporting and hunting bloodline.

They have an appearance of a Rottweiler, thanks to their coloring but these dogs are much smaller and look dainty.

Caring for the coat is no hard task. All you need to do is brush it twice a week to remove loose hair and keep it tidy.

As for his temperament, a Transylvizsla hound needs a firm trainer because they can be very strong-willed.

He also needs to be socialized at a young age to co-exist with young kids and other pets.

If you love both the German shepherd and the Vizsla, you’ll definitely be smitten by the offspring of the two breeds.

Both have excellent working and companion abilities that combine to make a friendly, hard-working, and sociable dog.

He exudes intelligence in everything he does. He also picks up new tricks relatively fast and loves to work.

Other attractive qualities that make this pet an amazing companion include loyalty, protection, gentleness, an outgoing personality, and great sociability skills.

If he ends up with Vizsla’s short-haired coat, you won’t need to break a sweat maintaining it.

Else, if he has the German shepherd’s super dense coat, it’ll need lots of work.

The Vizsla and Dachshund cross is also quite popular because of the many perks you get when owning one.

For one, this pooch is affectionate. He enjoys spending time cuddling, playing Frisbee, or sitting on your lap when you are watching a movie.

Like his parents who were hunters in different capacities, this mix possesses great hunting skills.

If you have other pets at home, he might see them as prey. However, early socialization and training will solve the problem once and for all.

Grooming is minimal since both parents are short-haired.

As long as you are firm during training and offer tons of physical activity, this dog will make for a wonderful family pet.

The Vizsla and Boxer are almost similar in weight and height. When combined, the result is an offspring with anything between 45-70 lb. and a height of 21-25 inches.

Both parents are short-haired, a feature passed on to the mix.

Like the Vizsla, the Boxer was bred as a hunter and working dog. The resulting mixed breed, therefore, has amazing hunting instincts.

As for his temperament, a Vizsla boxer mix is affectionate and loves spending time with his owners.

If trained early enough, he should peacefully co-exist with other animals and small children.

Neither of the parents is a heavy shedder, so grooming the coat is easy.

As long as he gets plenty of physical activity outdoors, he will be just a happy bundle of joy.

The Golden Vizsla is a designer dog whose parents are the Golden retriever and the Hungarian Vizsla.

At first glance, this pup looks like a purebred Retriever because the Vizsla looks somewhat like a small Labrador.

Ideally, the mix is medium-size (no more than 60 pounds) with a moderately dense coat of a golden color.

Thanks to the hunting history of both parents, the mixed breed is a natural hunter.

If you enjoy spending time hunting ducks or waterfowls, his skills will come in handy more than you will ever know.

The beauty with him is that despite being very energetic, he can live in an apartment provided he gets his daily dose of exercise.

Golden Vizslas get along with other pets but need plenty of firm training to get there.

Another popular dog that sells like hot cake is the Vizsla Beagle mix.

The Beagle is a very old dog breed, with roots all the way back to Ancient Greece around the 5th century BC.

Being small, he was referred to as a “pocket dog” during the times of Henry VII and Edward II and would play a big role during the hunt.

The Vizsla is no stranger in the hunting world as well. The resulting breed from the combination should be a good hunter.

If not hunting, this is a lovely pet with a sweet and charming personality.

Just expect a lot of running and playing Frisbee to help him expend energy.

The fast and powerful Rhodesian Ridgeback and the pointer Vizsla can also be combined to get a beautiful breed with amazing qualities.

Considering the fact that both have strong hunting instincts, the offspring should be a powerful and large hunting breed.

He is also very intelligent, affectionate, and capable of independence.

With his parents having short-haired coats, a Rhodesian Ridgeback Vizsla mix doesn’t shed as much.

All he needs is a lot of physical activity and firm training to mold him into a happy, sociable, and healthy dog.

A rather rare mix, the Vizlapoo is a designer breed resulting from the combination of the poodle and Vizsla.

Any of the poodle sizes can be used to create this mixed breed.

If using the Toy Poodle, the result is a small or medium-sized dog depending on which parent qualities play out the most.

Else, if the miniature or standard poodle sizes are mixed with the Vizsla, the dog should be either large or medium in size.

The coat can be dense or smooth again depending on the dominant qualities of the parents.

Both parents are light shedders, obedient, intelligent, and affectionate. The offspring should have most if not all of these qualities.

Vizsla mixes can make wonderful family pet, but many people are welcoming them into their homes purely because they like their appearances or simply because they have trendy names.

However, it is important to note that not every vizsla mix we’ve included on our list above will be a good fit for your lifestyle.

Generally, a crossbreed’s personality is not as predictable as a purebreed’s. You can never be sure about the traits a mix may inherit from each of its parents.

There are also too many irresponsible breeders who are cashing on the mixed dog breed craze and selling the myth that crosses are automatically healthier. This is not true!

While your vizsla cross may have a wider gene pool compared to other pedigree dogs, any dog can get sick.

To be safe, always get your vizsla mix from a responsible breeder. Most importantly, check the health test results of both parents in the same way you would for a pedigree dog.

Meeting the parents of the vizsla cross you plan to buy or adopt can also give you a better insight of what to expect from the puppy in terms of his personality.

Vizsla mixes have amazing qualities all rolled into one. This is the reason their popularity has blown up in recent years.

Now you have an idea of what to anticipate if you decide to be a parent of one of the mixes above.

As usual, work with reputable breeders who will dispense all the information about the health of your dog. You don’t want surprises in the future.