Home Breeds Fluffy vs. Non-Fluffy Golden Retriever: What You Should Know When Getting a... 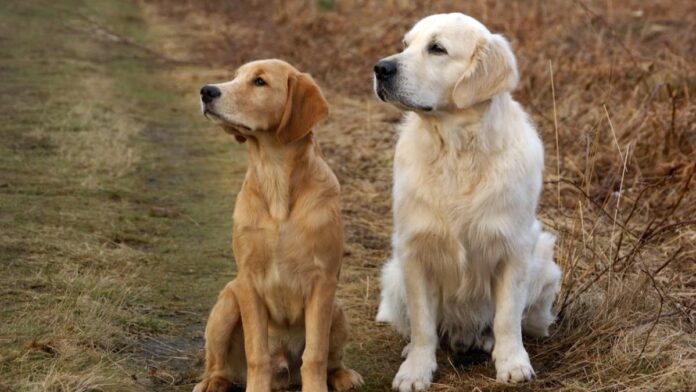 Sweet, gentle, even-tempered, playful, affectionate, and intelligent… there are plenty of reasons why the Golden retriever is everyone’s favorite dog.

This breed is so famous for being a charming member of the family.

When you are around him, you cannot resist the temptation of running your fingers over his fluffy coat.

If you are considering bringing a Golden retriever puppy home, you couldn’t have made a better decision. He will fill your life with so much joy that you never imagined possible.

When choosing a puppy, you might encounter both the fluffy and non-fluffy types.

Granted, the first type is the most abundant but it is not uncommon to have a non-fluffy pooch as well.

Which one should you go for and why?

To keep you informed, we will highlight what you should expect from both fluffy and non-fluffy Golden retriever puppies.

The Golden Retriever Coat at a Glance

However, as they reach three months of age, you will notice the coat taking on the appearance of long hair. This begins at the tail where a few strands of long hair will grow over the soft fluffy hair of the puppyhood stage.

The stage is called ‘feathering’. The feathers start at the tail then grown on the legs and stomach area.

Gradually, the rest of the areas will grow flat, long locks with the new hair being longer and darker than light puppy fur.

Instead of the puppy shedding his fur, the adult hair often grows on top of the fluff.

Even as the adulthood hair catches on, some Goldens will still have fur variations on their skin.

Why Do Some Golden Puppies Lack the Fluff?

While a large majority of Golden retriever puppies have fluffy coats in their younger years, some just don’t.

If you have visited a rescue or a breeding center, you have probably noticed this.

Ending up with a non-fluffy goldie can be really frustrating, especially if you know that Golden retriever puppies should have fluffy coats when they are young.

So what can cause a Golden retriever puppy to lack the fluff?

Here are a few suggestions.

Genetics plays out a lot in the making of the puppy. From the color of his coat to his texture, and even the amount of fur in it, don’t ever underestimate the role of genetics.

Coat length is a hereditary issue. If you adopt a dog whose either or both parents had a non-fluffy coat when they were young, don’t be shocked if the puppy features the same coat.

To know if the appearance of the coat is a result of genetics, talk to the breeder and find out if the parents had the same coat.

If one of the parents had the same coat or something close when they were little, you definitely have nothing to worry about.

Many people don’t know this but Golden retrievers come in eight varieties. Some are long-haired while others are short-haired.

The common short-haired variety includes field-bred golden retrievers. Bred to work in the field and hunt, this type has relatively short hair than his counterparts.

There’s another type called companion Goldens who are also known to have short coats.

All this is to say that maybe your dog isn’t meant to have a big fluff just since he is not long-haired in the first place.

Is your puppy less than three months of age and looks more like your neighbor’s lab?

Well, that’s probably because his coat is yet to develop the fluff.

By now, the hairs are preparing to shoot and so you cannot judge the future based on what you see now.

Wait until he turns 3-4 months of age to observe what is going on before making a conclusive judgment.

Related Post: What You Should Expect From a 6 Month Old Golden Retriever

The richness (or lack thereof) of a Golden retriever’s coat is also largely influenced by diet.

Typically, a growing puppy needs a perfect balance of fats, proteins, vegetables, and fatty oils to be in top shape.

If he doesn’t get enough or one or all food groups, the hair will fall out, appear to be dry, have dandruff, and shed excessively.

The only way to rule this one out is to visit the vet.

Last but not least, a non-fluffy Golden retriever puppy may be suffering from health issues that directly impact his coat health.

Often, the problem will show on the dog’s skin before affecting the fluff of the coat altogether.

If your pup shows any signs of sickness including decreased appetite, restlessness, stress, anxiety, diarrhea, vomiting, or just being in bad mood for long periods of time, let him be checked.

Whether you like a Golden retriever puppy with a fluffy coat or a non-fluffy one, there’s absolutely no reason why you should not bring him home.

But before you do, you have to know what to expect when it comes to caring for the coat lest you get confused and overwhelmed.

Ideally, you want to start grooming your ball of fluff as a puppy.

Golden retrievers are heavy shedders by nature, meaning if you don’t maintain a solid grooming routine right from the word go, you will have a tough future ahead. You don’t want that.

The earlier you start teaching him about grooming, the easier things will be for you because the dog will get used to it early.

First things first, a golden retriever should not be shaved. There’s a reason he has a double, fluffy coat.

It keeps him warm when it’s cold outside and insulates him from the summer heat.

If you shave him, he runs a chance of freezing in winter and suffering a heat stroke during summer.

To be safe, simply trim the hairs if they grow too long but really, you may not even need to trim anything.

You don’t want to lose the teddy bear look. Just locate any long hairs and clip them a bit for a good look.

Perhaps the only advisable thing would be to brush the coat once or twice a week to keep it neat and keep any loose hairs away from your surfaces.

Brushing allows the body to release its natural oils and makes the coat shiny and cute.

A slicker brush will get the job done to perfection. It has a wide surface filled with pins and will help your work through loose hair and mats.

What about a Non-Fluffy Coat?

Some people consider non-fluffy golden retriever puppies to be less attractive compared to their fluffy counterparts.

While that may be true to a certain extent, having a non-fluffy type may be a blessing in disguise. This is because you have less hair to worry about. This means fewer grooming sessions for you as well.

The best grooming tool for a non-fluffy golden retriever is the bristle brush. It is less intense and is ideal for your pup.

Like his fluffy cousins, a non-fluffy Golden doesn’t require any shaving or trimming. A weekly brushing schedule should do the job.

At this stage, expect the puppy to play with the bristle brush and chew it up.

Don’t worry. That is the whole process of getting him used to it.

After a few sessions, he will be comfortable with grooming and will give you an easy time.

Wondering whether to buy a fluffy or non-fluffy golden retriever?

Both options are good-looking dogs with the same incredible temperament of the breed.

Caring for the coats is slightly different as well as looks but either way, you will have a great canine friend in your golden retriever.

10 Best Toys to Buy for Goldendoodles