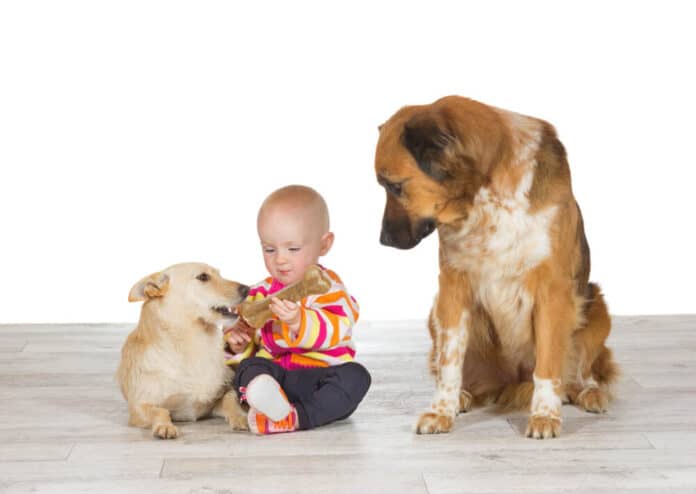 Dogs, in general, enjoy being the center of attention from time to time. You’ll notice your Fido whining a little when you pick up the baby without taking too much notice of him.

He may also growl when you hug another member of the family. It’s just a natural way of saying “I want some of that too.”

However, some pups just take the need for attention to the next level which can easily translate into jealousy.

A recent study by Christine Harris and Caroline Prouvost also found that dogs do get jealous.  The two researchers observed that dogs demonstrated more jealous behaviors whenever their owners displayed affectionate acts towards objects that resembled dogs (dog-like toys) than to other non-social objects.

In short, whether it is the type of jealously that we often experience or an offshoot of inherent dog behaviors like resource guarding or redirected excitement, it is apparent that dogs also feel some form of envy.

But no matter how much you love your canine buddy, you don’t want a jealous dog that craves your attention aggressively.

While jealousy is an individual affair, there are some breeds that tend to exhibit the behavior more than others.

In this guide, we take a look at the ten most jealous dog breeds.

If you have ever owned a Frenchie before, you know this dog clinches the title of the most jealous dog.

He tends to be aggressive or bark incessantly when a stranger comes your way. He won’t mind following you wherever you go.

If another dog jumps at you or when you cuddle your baby, expect your Frenchie to throw a tantrum. This behavior can be traced to the fact that this breed suffers from separation anxiety.

Bulldogs are also true companion dogs that can be overly dependable. Sometimes, the jealousy is triggered by boredom.

You need to train him to co-exist with other dogs and humans at an early age. Additionally, he needs plenty of toys to kill boredom.

The cute and thick-haired Australian shepherd is also prone to jealousy. Aussies are protective in nature. Therefore, when they see another person giving you a hug, their protection instincts kick in immediately.

Lucky for you, with the right training, this behavior will turn into a blessing of sorts. Your dog will learn to join in the hug rather than bark at you.

Positive reinforcement and treats are amazing training hacks for Aussies.

Labs crave human attention like nobody’s business. They love interacting with their owner and being by their side round the clock.

Under normal circumstances, this is such a good thing. It is the ultimate proof of loyalty and love. It is when this graduates to jealousy that things can take a turn.

Labradors can be overly protective especially around other pets. Again, training and more attention will almost always solve the problem.

Pit bulls were bred to hunt prey and fight with other dogs.

If you have another dog or pet at home, don’t be surprised if your Pittie gets overly jealous and attacks them. This is especially true if the dog seems to take your attention away from the terrier dog.

Other times, pit bulls act jealous because they are simply bored. It is particularly important that you do something about your dog’s jealousy because as you might have heard, this breed is the most aggressive in the dog’s kingdom.

Cocker Spaniels are some of the most affectionate dogs out there. They love petting, kissing, cuddling, hugging, and just loving on their owners.

Sadly, they can get very jealous when they don’t get attention from you. They can bark incessantly when you seem too busy to notice them or jump hard on you when you cuddle your toddler.

Common causes of jealousy include boredom, excess energy, and a desperate cry for your attention.

If you are looking for a tough, energetic, and wonderful canine companion, a German Short-haired Pointer fits the bill.

Bred to be a hunter, this dog possesses some of the most exquisite hunting skills.

On the flipside, this breed can be overly protective and jealous. They always want to dominate smaller pets, barks at guests endlessly, and treat strangers like suspects in the home.

When they get jealous they can be destructive or too jumpy.

Golden retrievers, like most other retrievers, are predisposed to unwanted attention-seeking behaviors. This breed is social and loves hanging out with their human buddies.

So, when another person or animal comes too close to their owner, they can easily get jealous.

In most cases, the attention-seeking behavior is actually welcome until it isn’t. This is when your dog would not let you work from your computer in peace just because he wants time with you.

You will find it hard to do daily tasks like cuddling your child, hugging your spouse, or having a conversation with a stranger without your dog being offended and acting out.

Border Collies are known for their intelligence, athleticism, and strong work ethic. Developed to herd cattle, this breed takes notice of the tiniest of movements.

If they suspect danger, they will keep still or move in steady and calm motions.

As a pet, most of these traits are present. They will herd other pets, kids, brooms, and any object that moves. When someone comes too close to their owner, these dogs will do something about it.

Like a Lab or Golden retriever, the Brussels Griffon has a huge desire to hang around human beings. He loves to lie on your lap for long periods of time.

If you don’t accord him the necessary human care and attention, jealousy is inevitable.

This breed also suffers from separation anxiety. When left alone for too long, he is likely to get jealous and act out.

Last but not least, we have the Boston Terrier, a dog known for barking randomly and unnecessarily.

When hanging out with friends and family members, he will just sit in front of you and bark or growl. Sometimes, he just barks at you when you are doing your chores around the house.

This breed just loves being the center of attention. When this shifts away from him, the barking and growling behavior picks up.

A jealous dog is, oftentimes, an unhappy dog trying to send a message.

If you notice this behavior, find ways to control it. One of them is consistent training alongside positive reinforcement.

Also, try to accord your pup as much attention as you can to prevent him from seeking it out using the wrong means.

Do Dogs Get Jealous Of Babies? (Plus Jealousy Signs & How to Deal With Them)