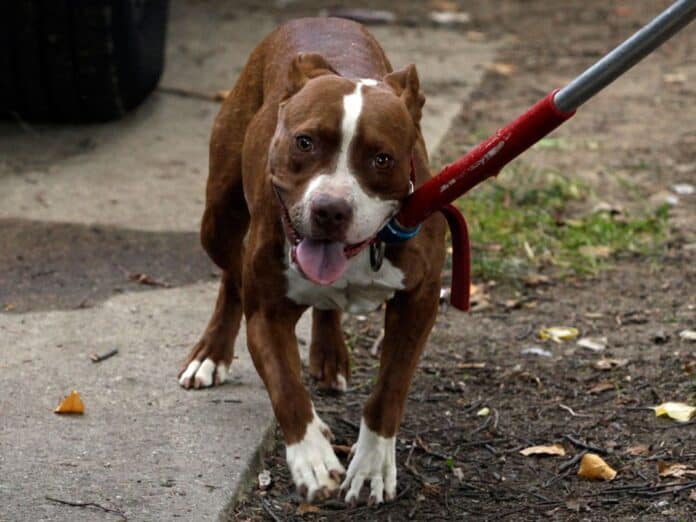 The first line of defense for a dog is his jaws. Anytime a dog feels threatened, challenged, or unsure, he will respond by biting.

In most cases, biting is a sign of fear and not aggression. This is part of the reason the canine jaw is the strongest out there.

Sure, it doesn’t compare with that of a hyena, polar bear, or shark but is pretty rock-hard.

While all dog breeds have strong jaws, only a few are said to have the ability to ‘lock their jaws’. This means that their jaws can latch onto an object, enemy, or an opponent’s flesh and stay in position.

In theory, if such a dog can latch to an opponent or enemy and lock his jaw in place on sensitive areas like the neck, there is a high possibility of the dog doing significant damage and even killing the opponent or the enemy.

But the whole idea of locking jaws in dogs sparks a hot debate to this day. Some believe that dogs cannot lock their jaws while others believe they can.

If the ‘lock jaw’ theory is correct, it can be an invaluable quality of dogfighting breed, bull-baiting dog,  or an attack dog.

The ‘lockjaw mechanism’ that we’ve described above (and which we will be referring to throughout this article) shouldn’t be confused with a medical condition in dogs, Tetanus Bacillus, which is also commonly referred to as Lock Jaw.

The latter is a real syndrome that causes the affected dog to lose the ability to control his jaws.

The jaw muscles tighten, locking the mouth in place and may result in other side effects such as lack of energy, difficulty in breathing and swallowing, fever, painful urination, and inability to defecate.

The condition is caused by a nasty bacterium, Clostridium tetani, which is typically found in dirt/soil and places with low oxygen levels. The bacterium can also live in the tissues and intestines of dead animals.

Although science is yet to prove whether or not there is evidence for the existence of any kind of ‘jaw locking mechanism’ that’s unique to certain dogs, here is a quick list of dog breeds that are believed by many to lock their jaws.

The American Pitbull Terrier (APBT) is a confident, tenacious, and intimidating dog breed from the terrier family.

Weight ranges from 30-85 pounds but no matter the size, this is no dog to mess around with.

With a bite force of 235 PSI, this breed is deadly when it comes to biting.

He can deliver a killer bite if he feels threatened or challenged in any way.

If you are on the receiving end of an APBT bite, you better hope that the dog doesn’t engage its jaw locking mechanism.

Thankfully, American Pitbull Terriers are quite charming. They are loyal, great around the farm, gentle when they want to be, and just perfect as family dogs.

Treat them right and you’ll never experience their incredible bites.

With an exuberant personality and cute face, a boxer is a popular family dog.

He possesses a calm and protective nature plus he loves having fun– both of which make him remarkable at home.

As an awesome guardian and watchdog, this dog tackles threats head-on. Although he may not at the first sight of the enemy, he will not hesitate to do so if the situation calls for it.

This athletic and muscular canine boasts a bite force of 230 PSI which is not too shabby.

He is also rumored to be one among many dogs that can lock their jaws. Unless he voluntarily chooses to let go of the opponent, a boxer’s jaws will remain locked in place.

Like many pitbull-type dogs, the American bulldog was used in bull baiting. This sport was famous in England in the 17th century and was evidenced by dogs fighting bulls.

Although bulldogs rarely bait bulls these days, they are still as strong, muscular, and brave as they were five centuries ago.

As protective members of the family, they can take down intruders of any size with relative ease.

The bulldog’s bite force is 305 psi which is much higher than that of the American Pitbull Terrier.

Not only is this breed’s jaw strong but it is also thought to have a solid locking mechanism.

Lucky for dog lovers, bulldogs have evolved and are now amazing pets.

They love to be put to work but they are also fine lazing around the home and playing with kids.

The Staffordshire bull terrier is a muscular, compact, and agile dog.

Standing at the height of 14-16 inches, it is about 6-8 inches shorter than the American Pitbull Terrier.

Despite being shorter, this breed is similar to the APBT in many ways. For one, they both have strong jaws that can lock. The Staffordshire bull terrier also fought dogs back in the day along with his counterparts.

Now, he loves nothing more than snuggling with those he loves. You only get to see his other side when he senses harm come his way or those he cares about.  This almost always happens when other dogs take over his territory.

Sadly, this is no dog for multi-pet homes. He likes his own space and hates it when other dogs come around.

Bully-type dogs are famous for being heavy-boned, muscular, wide-fronted complete with square heads, and most importantly, large-jawed.

The American Bully is no exception. Despite him being a little mellow than Pitbulls, he is endowed with large and powerful jaws.

Don’t be deceived by his sweet looks and friendly personality. If he sees you as an opponent, he will deliver his strong bite that can take you down easily.

The breed is also among those that are believed to lock their jaws well. No matter how strong you are, you will have a hard time breaking away from the bite.

Fortunately, an American Bully rarely bites. As long as he is well socialized, he will enjoy human company (even that of strangers) quite impressively.

Here’s another breed that is commonly confused with the famous American Pitbull Terrier.

They weigh relatively the same and stand at about the same height. The main difference though is the American Staffordshire’s narrower size range compared to the APBT’s much wider range.

Additionally, the latter has greater variances in physical traits than the former.

Unlike other pitbull-type breeds, the American Staffordshire terrier did not heavily participate in dogfighting.

Because of this, he is a warm, playful, and benevolent dog.

However, he has the same strong bite force as his counterparts. Plus, he can also lock his muscular jaws and hold onto prey till help arrives.

American Staffordshire has a high prey drive and seldom gets along with other dogs at home. If you are looking at owning one, keep this in mind.

According to Psychology Today, the Mastiff has a bite force of a whopping 552 psi clinching the top positing in this category.

This is a massive difference from Pitbull’s 235 psi – a dog that is often considered to be aggressive.

The contrast between the two breeds is that despite having powerful jaws, the mastiff is not as aggressive as the Pitbull.

Still, it is believed that he can lock his jaws, making him twice as intimidating.

Not only can he break bones with relative ease but he can also engage his locking mechanism.

Add all that to his sheer size, and you should know why you shouldn’t make a mastiff dog angry and agitated.

Rotties- like Pitbulls have been banned in some countries for being too aggressive.

For one, they have fierce and strong physiques. Then there’s the fact that they love getting into fights especially with other dogs.

Well, in all honesty, with the right training, Rottweilers make lovely and obedient pets.

Sadly, there’s a large batch of dog owners who don’t give their pooches proper training.

It is believed that they may also lock their jaws during intense fights.

With a strong bite, the opponent will be lucky to make it alive especially if bitten in the neck area.

Dogs that lock their jaws do not necessarily tend to bite. Chihuahuas, for instance, are most likely to bite than mastiffs.

In case you love any of the listed breeds here, go for it. As long as you offer enough training and socialization, you will have a harmless dog at home.