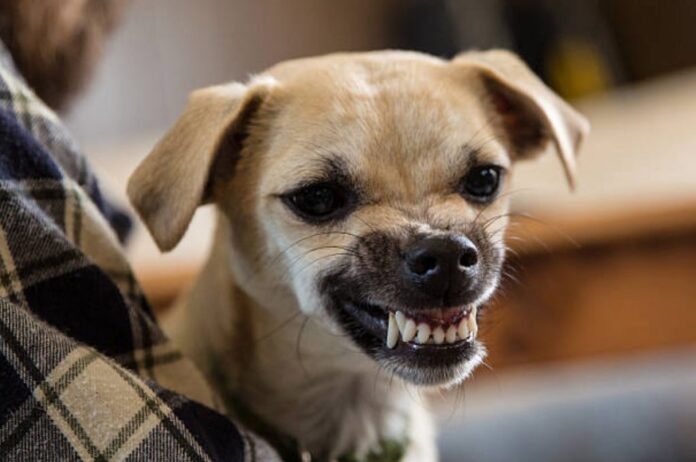 Owning a reactive dog is draining, frustrating, and exhausting in equal measure.

You dread going to the park or any public place. God forbid your pup doesn’t like the hat-wearing man in the park and loses control.

Having visitors over is not easy either. Anything from the smell of the visitors to their clothes and mannerisms can trigger him. When he’s in reactive mode, trouble will ensue.

Dog reactivity can hold you and your dog back in more ways than one. If you don’t know how to deal with it, you may find yourself among the list of owners taking their dogs to the shelter.

Before you reach there, we have a guide that might be of help.

So, what exactly is meant by dog reactivity, and what are the breeds famous for the behavior?

What Is Dog Reactivity?

According to the American Kennel Club (AKC), dog reactivity is a situation where a dog reacts to stimuli.

This can be anything that makes him uncomfortable including being put on a leash, being in the company of hyperactive children, having strangers at home, loud noises, and the sight of other dogs or cats.

When a reactive dog encounters such stimuli, he essentially feels stressed, anxious, fearful, and threatened.

Ultimately, he will display some reactions including biting, growling, retreating to safe spaces, barking, bouncing, snapping, and lunging.

Reactivity in dogs can be caused by several factors including a lack of proper training, insufficient or no socialization, and genetics.

Ideally, reactivity is mostly fueled by fear. When your pooch feels threatened or afraid, he will exhibit a reaction for the same.

Oftentimes, he will dash off the scene. However, if there’s no way to make a run for it, he will choose to protect himself instead. If a person is leaving the home, the dog may sneak up on them and bite.

Reactivity and aggression in dogs are often used interchangeably. Many people cannot tell one from another.

As a matter of fact, pet parents with reactive dogs often think that they are outright aggressive.

The reason is that a large percentage of reactive dogs become aggressive in certain situations.

Well, the two terms may be closely-related but they mean different things.

As mentioned before, dog reactivity is a reaction to stimuli. Aggression, on the other hand, is the intentional threat of harm toward an individual – human or animal.

The term ideally consists of a variety of behaviors triggered by different reasons.

Dogs are territorial and most times become aggressive to protect their territories and offspring. They also do it to maintain peace and settle social interactions.

So in a sense, a reactive dog is just a nice pet trying to have fun and stay alive.

He usually wants to interact with you and be normal but he’s unable to do so because of the triggers.

When he encounters a trigger, he will try to control himself. However, if he reaches his threshold, he literally cannot control his actions.

He focuses on the trigger while other things are tuned out. You can offer treats, yank the leash, or yell but the dog will not acknowledge your presence.

Reactive dog training can help such a dog immensely.

An Overview of Reactive Dog Breeds

As we alluded to before, dog reactivity can be caused by several factors. One of them is genetics.

Certain breeds of dogs are predisposed to being reactive. Here are the top 8:

One of the most intelligent dog breeds in the world, the Border collie is an amazing pet to own. His herding skill, stamina, and determination are astounding.

It is this very character that makes this breed a tad reactive.

Border collies were bred to have laser-focused. They can easily react to changes in their environments.

While this is great when herding sheep and cattle, it can become a burden at home.

Why Do Border Collies Hug?

If you keep tabs on the canine world, you have probably come across endless online videos of Chihuahuas acting out.

Perhaps you have witnessed it yourself physically. These dogs may be tiny but they aren’t afraid to bark or bite when they feel threatened.

They tend to be extremely territorial, anxious, attention-hungry, and unfriendly to strangers.

One or a combination of these factors can trigger their reactive side.

Confident, dedicated, and hardworking, the Belgian Malinois is another exceptional pet.

This is the number one reason he is loved in military and police institutions.

If well trained, he will get work done without question. Although not all dogs of this breed are reactive, some of them are.

For one, they are so focused on what they do. Secondly, they form powerful bonds with their human friends.

These reasons put them at risk of reacting to things in their environments.

The Australian Cattle dog is a beautiful, muscular, and compact dog bred to herd livestock. No doubt he excels at the job – thanks to his hardy and resilient character.

Count on him to be energetic, loyal, alert, and small.

However, like most herding dogs, he can become reactive fast. Anything that triggers his focus and determination can set him off.

The popular boxer is loved for many things such as affection, friendliness, and goofiness.

The flipside, though, is that they have dominance issues, separation anxiety, attention-seeking behavior, and a need to fiercely protect the family.

In turn, their reactive side can be easily triggered.

Bulldogs were utilized to fight bulls, horses, and boars. They have a rough history of being hardy and unafraid.

If your bulldog doesn’t like something, he will not shy away from fighting back. This is especially true if he was once mistreated or abused.

Rottweilers are great and all but they struggle with dominance like boxers.

The sight of other dogs especially causes them to become very reactive.

Plus, they don’t like being on the leash very much. Since they are powerful, they can pull on it so hard when they lose control.

The reason is simple: he is a passionate and committed herder.

If certain things in his environment make him uncomfortable, he may make a fool of himself.

Reactivity in dogs is mostly an issue of socialization, training, and abuse.

Genetics also plays a role in it. The breeds on this list are more likely to be reactive.

However, there are many more that are not reactive. Focus more on training and socializing your pup and he will turn out fine.