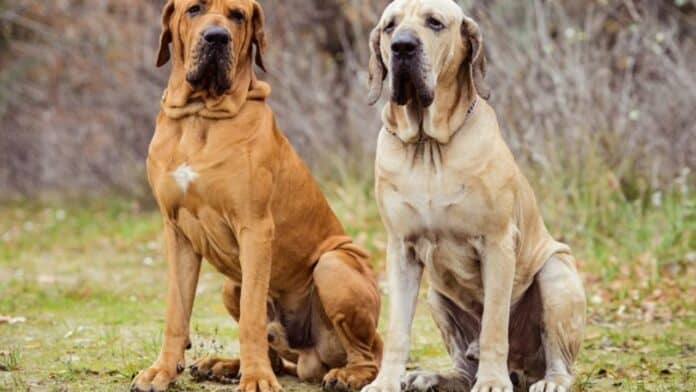 Droppy jowls are sometimes associated with facial paralysis but other times, its all about genes.

Also called a dewlap, a jowl is a piece of sagging skin below a dog’s chin.

Not all dogs sport this unique feature but those that do wear it with pride.

Sadly, many of them drool most of the time but that doesn’t lower their confidence the tiniest bit. In fact, their owners find the sagging skin as added beauty.

Wondering which canine breeds pull off this look without any apologies? We have a list of 10 of them.

Several mastiff-type dogs are created with jowls that hang low. The extent of droop varies with the individual breed.

Perhaps the one with the droopiest jowl is none other than the wrinkly canine beast by the name of the Neopolitan Mastiff. This leads the line on this front.

Others like the Bullmastiff, Dogue de Bordeaux, and the English mastiff also have hanging jowls albeit not very low.

Mastiffs are fighters and need loose skin to protect them during intense fights.

Named as the number one scent-hound, the Bloodhound can pick up the action from as far as 130 miles.

You read that right. This doggie is an expert scent-follower—better than any other breed.

Whether it is looking for a missing person or tracking down a rodent burrowed under the earth, trust the Bloodhound to uncover it.

This breed not only has an excellent nose but features droopy jowls and floppy ears as well.

He is also famous for drooling all over the house. With such droopy jowls, can you blame him?

Basset Hounds are easily recognized by their super long flabby ears and loose skin all over the body.

From their saggy jowls to wrinkles on their stumpy feet and hanging skin everywhere else, this breed is unique in its creation.

Don’t be fooled by their lazy appearances though; Bassets, like Bloodhounds, can track scents for miles.

Rarely do they come up empty. If you want another effective hunting buddy, this one will not disappoint you.

Bulldogs are among the top 10 popular dog breeds in the United States.

Thanks to their calm and laid-back dispositions, they have warmed their way to many American homes.

Additionally, the breed has some of the cutest animals ever. How can you not fall in love with the bulldog’s wide grin plastered on a dazzling flat face?

Plus, they are always happy and spread cheer around the home.

Despite being heavy, Bulldogs (both American and French varieties) are fantastic lapdogs. They don’t mind chilling on your lap for hours.

Sadly, their hanging jowls make them slobber heads but this is nothing you cannot handle if you love dogs.

Saint Bernard was developed to track scents and carry out water rescue jobs.

When wading through the water, his droopy jowl helps him to breathe well.

At home, he makes a great watchdog, thanks to his sheer size and intimidating bark.

The breed loves its owners deeply and is fiercely protective of them.

The Chinese Shar-Pei is another dog with a distinctive look.

If you are asked to describe the breed, you will probably mention his incredibly wrinkled skin and regal appearance.

No doubt this is the most wrinkled dog especially as a puppy. As he grows up, some of the wrinkles tighten out but some remain unchanged into adulthood.

As a guard dog, herder, and herder, the Shar-Pei needed the curls and droopy jowls to look tough and intimidating and most importantly to protect himself if need be.

The Fila Brasileiro is a huge Brazilian hunting breed with the look of a fierce dog. His head is massive and his body heavy and rectangular.

He was mainly bred to track prey and trap it. His unforgiving temperament and aggressive attitude coupled with physical looks make him a force to reckon with during the hunt.

Fila Brasileiros are also designed with dewlaps or droopy jowls that add to their regal looks.

Newfoundland dogs or Newfies are popular for their massive and powerful builds, intelligence, and sweet temperaments.

It is hard to imagine that a working dog of this size and power can be just as sweet and calm.

Well, the Newfie strikes the balance quite well—no wonder he is a beloved pet.

Those that love him have learned to put up with his drooling habits. This habit is a result of the loose skin on the side of his mouth or jowls as we know it.

Boxers look like their distant relatives—the mastiffs—especially when it comes to facial features.

These dogs are always ready to hunt something – a job description bestowed upon in ancient times.

Boxers are also playful and upbeat. Their protective and patient characters make them great with kids.

This Chinese toy breed is known for its loyalty and playfulness. He is also very adaptable and can exist pretty much anywhere.

With his expressive eyes and squished wrinkled face, a pug always appears curious.

Add that to the dewlaps underneath his neck and you have a drop-dead gorgeous doggie at home.

She can drool, though, so be ready for that.

From mastiffs to hounds and everything in between, that sums up the list of dog breeds with droopy jowls.

These beauties are created with sagging skin under the chins for a reason besides aesthetics. This is why they excel in their duties.