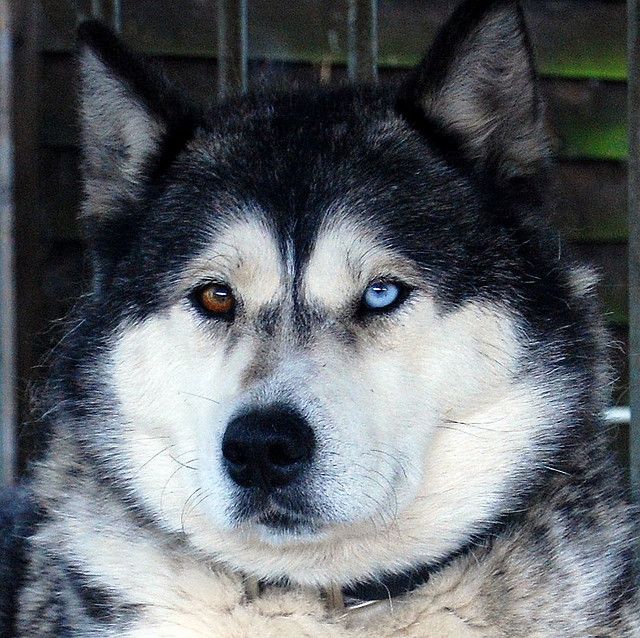 With their hypnotizing blue eyes, dense double coats, and wolf-like faces, Siberian huskies are some of the cutest dogs on earth.

They are incredibly photogenic almost like they are aware of their remarkable looks.

As renowned sled-pullers, these dogs appear serious and always ready for work. The black thin ring around their cute blue eyes makes them fierce and intimidating.

However, huskies are not always in business. They are friendly, loyal, charming, and cuddly.

Sorry if you are looking for a guard dog here. These doggies are too friendly to all even strangers.

They have a lot of energy (after all, they were bred to run) and make great pets for people who want an exercise buddy.

We could go on and on about the perks of owning a Siberian husky. However, let’s talk about one of the most striking things about the breed: heterochromia.

If you don’t know yet, this is a condition that causes a dog to have eyes of different colors.

To help you understand a husky better, we have detailed 7 facts you probably didn’t know about heterochromia within the breed.

1. Huskies Have A Genetic Mutation That Causes Heterochromia

Heterochromia is mostly a genetic condition, meaning that it is caused by the DNA of the dog in question.

Huskies are the biggest victims of the condition because of a genetic mutation that tampers with the melanin in their eyes.

Normally, when the melanocytes are not enough, the iris will take on a blue color which is the case with most huskies.

Other dogs with brown eyes have lots of it.

For bi-colored dogs, one eye will have more melanin whereas the other one comes up short.

What ends up happening is that one eye will appear blue and another one brown.

2. The Eyes Can Be Parti-Colored

While heterochromia mostly causes one eye to be completely blue and another one completely brown, it can cause part-coloring as well.

In this case, one eye will feature two different colors – mostly a combination of brown and blue.

The blend happens near the edge of the eye while the other one remains blue or brown.

How melanin plays out affects this coloring. The one eye with the different colors usually has a mutation that allows more melanin in some parts of the eye and less in other parts.

3. The Condition Is Not Related To Cross-Breeding

Some breeders are in the habit of perpetrating the lie that heterochromia is caused by bad breeding techniques.

You have probably heard this already. The said breeders will blame in-breeding and line-breeding as the two main causes of the condition.

The principle behind the myth is that heterochromia increases the risk of UV damage to the eye.

However, nothing could be further from the truth.

If these myths were true, other breeds that are victims of bad breeding practices would suffer the same fate.

But as it is, huskies are the biggest victims.

4. The Condition Does Not Cause Eye Problems

A husky with different colors is a head-turner. However, many people worry that the problem can cause eye issues down the line.

Generally, huskies are predisposed to a number of eye problems. 8-10% of the world’s husky population suffers an eye problem or two in the course of their life.

However, having two eyes of different colors doesn’t exacerbate the problem.

There are no studies to support this claim. The main issue is the presence (or lack thereof) of melanin which affects the eye color.

With that said, the color of the eye can indicate an underlying medical condition.

If your husky’s eye color changes suddenly or you notice one or both becoming cloudy, see a vet.

It could indicate the onset of cataracts which may need to be removed.

5. Huskies Develop Heterochroma As They Grow

Like all dogs, Siberian huskies are born with beautiful blue eyes.

They remain that way until about 5-8 weeks where transformation will begin to take place for some of them.

For a huge majority, the eyes will change to brown—one of the accepted eye colors for the breed.

Many more will remain blue while others will begin changing only to get stuck in green.

The few that are meant to have different colors will also change as the pup grows.

At about 16 weeks, the permanent eye color will be in place.

If you have a blue-eyed husky pup now, be ready for anything.

Luckily, the phenomenon doesn’t affect the health of the dogs. On the contrary, heterochromia makes your dog extra special.

Husky colors are quite the number. A majority have blue eyes. These are the ones with decreased melanin in both eyes causing the iris to be blue.

Brown-eyed huskies follow closely and these are the ones with lots of melanin in their eyes.

The color ranges from a light haze all the way to a deep dark brown.

Huskies with brown eyes often appear to be black but it is the dog’s black pupil that blends with the brown iris to make the eyes appear black.

Bi-eyed and parti come in the next spot. About 10% of huskies have two eyes of different colors while 5% have parti-eyed pups.

Last on the list are green-eyed dogs. This color is rare and not official.

Essentially, when pups are transitioning to brown from blue, some get stuck along the way and don’t make it to the end. Their eyes remain green for the rest of their lives.

7. A Husky With Mismatched Eyes Can Have Parents With Blue Eyes

Another interesting thing about heterochromia in huskies is that dogs with the same color of eyes can get offspring with differently-colored eyes.

During breeding, there’s no telling how the eyes of the resulting litter will turn out to be.

The 2 in 1 coloring is all about luck. The composition of melanin in the dog is what really matters.

8. Heterochromia  Is Not Linked To Coat Color

A good example is the Aussie where blue-eyed dogs tend to have a merle coat pattern.

The case is not true for Huskies. The blue color can occur in black, white, or brown huskies.

Likewise, a dog of any coat color can have differently-colored eyes.

Huskies have so many physical features that draw the eye.

One of the big ones is their captivating eyes. From blue to brown to green and even bi or parti eyes, this breed is available in all.

The best thing about heterochromia is that it doesn’t cause any illness in a dog. It just adds to their beauty and mystery.

What’s It Like to Own a Husky Basenji Mix?