Home FAQs Do Dogs Have A Flehmen Response? 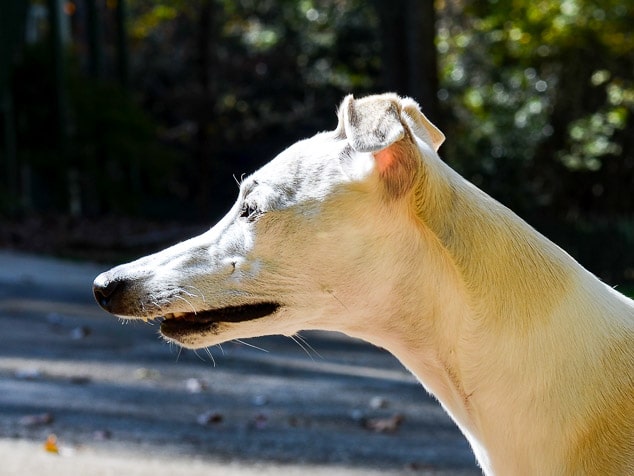 Flehmen response in dogs refers to when a dog curls his upper lip to facilitate the movement of scents into the vomeronasal organ (VNO).

The VNO is found in the roof of the mouth and when the dog curls its lips, it exposes the organ which makes it easier for it to pick the scent molecules.

This makes it easier for the canine to detect the urine of other species among many other important things like if a predator is nearby or how long ago the predator passed by.

Even though dogs occasionally have the flehmen response, they do not display it as much as felines and other animals.

Dogs have an extremely sophisticated sense of smell and they seldom need the flehmen response to pick scents.

For the most part, the dog uses the olfactory bulb to pick up smells which are then sent to the brain for processing.

The VNO can be thought of as a second olfactory organ and it is a chemosensory organ that is typically used for social, parental, and sexual communication.

This communication is made possible by the chemoreceptors which help to detect the chemical signals in the pheromones that are released into the environment by other dogs.

Pheromones are chemical substances that are secreted by an animal’s glands and they are typically in feces, saliva, and urine.

The flehmen response in dogs is an important means of communication between dogs and other species.

Through this technique, the dog will pass air that has pheromones to the VNO.

The dog can then use the scents picked to learn some things about other animals in their environment.

Here are important messages that they can decode from the scent.

By so doing, females will know to associate with other females in an ovulation cycle and studies have even suggested that female mammals can use this technique to manipulate when they conceive or give birth to their offspring.

Male dogs can also use flehmen response to identify females that are available for mating.

They smell the pheromones in the female urine to know the reproductive status of the bitch.

Dogs are predatory by nature and they are wired to investigate their environment not only for prey but also for predators.

To increase their chances of success, they use all their senses including sight, hearing, smelling, and the flehmen response.

The scent they pick will let them know which species is nearby and they will then know whether to respond by fight or flight.

Dogs and other animals mark their territories with urine as well as with pheromones that come from their feet and face.

They frequently check their boundaries and remark them if the scent starts waning.

Other species will then pick the scent and either respect or chose to violate the boundaries.

Do dogs have a Jacobson’s organ?

Jacobson’s organ is another name for the vomeronasal organ (VNO).

The VNO was named Jacobson’s organ after Ludvig Jacobson Levin, a Danish anatomist who discovered it in the year 1811.

This organ plays an instrumental role in animals that don’t have a sharp sense of smell like cats although it is still present and useful in dogs.

Why Does Your Dog Lick Urine?

If your dog takes time to smell the ground and even lick other dogs’ urine, there is no cause for alarm as it’s a common habit with dogs.

Dogs can lick the urine of other dogs when they want to contract the smell to their Jacobson’s organ, especially if the scent is waning.

Jacobson’s organ is located under the lip and licking the urine increases the odds of the scent getting to the organ.

Since the pheromones are usually in the urine, the act of licking urine is actually a way of reading the chemical message that is encoded in the pheromones of another dog.

However, as long as your dog follows the vaccination schedule recommended by your vet, you should have no reason to worry.

What other animals have flehmen response

In addition to dogs, other domesticated animals that have the flehmen response include goats, llama, cats mules, and horses.

If you see your dog puffing his lips or quivering the lower jaws, there is a good chance your dog is having the flehmen response.

Sometimes, the dog might try to lick urine and as odd as that might be, do not attempt to stop him.

Let him enjoy this natural behavior as it helps them develop and communicate with other dogs.