Home FAQs Do Puppies Take After Mom or Dad? 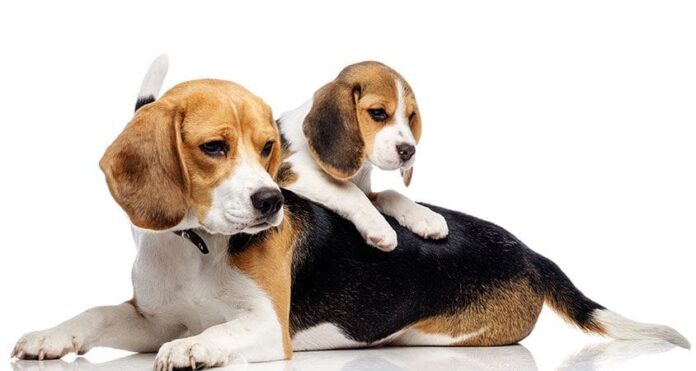 There is a widespread belief among many canine breeders that a dam has more influence on a puppy than the sire. So, when many people want to adopt or buy a pup, they are very determined to see the mother and not the father.

Well, science disagrees. Research shows that a puppy has a total of 78 chromosomes in his body cells. Out of that number, 39 cells come from the dad while the other 39 from the mom. These chromosomes contain thousands of genes that combine to ensure different behavioral and physical traits are passed on from the parents to the pup. However, this does not mean that a puppy will take on their mom and dad’s appearance or traits on a 50-50 scale. Realistically, he may resemble either of the parents or cut a totally different figure.

As much as the 78 chromosomes are shared equally between the mom and dad, some genes are stronger than others. The stronger genes are referred to as Dominant Genes, while the weak ones are referred to as Recessive Genes. Due to their strength, the dominant genes overpower the recessive genes to determine the behavioral and physical traits that will be passed from the parents to a puppy. The recessive genes, on the other hand, remain passive. However, they are not all useless as they are still part of a puppy’s genetic make-up and can be passed to his offspring.

If either mom or dad has all dominant genes, the puppy will take up their traits and resemblance. If one of the parents has all recessive genes, the likelihood of the puppy resembling either parent is 50-50.

What Trait Does a Puppy Inherit From its Parents?

If the breeder wants to eliminate certain undesirable temperamental traits in a particular breed, they will crossbreed different breeds. This is evident through the many designer dogs we have today, such as cockapoos and Labradoodles. Crossbreeding is important as it can help to balance out extreme personality traits and create more balanced dogs.

It’s far much easier to predict the personality of puppies if the parents are purebred. If the parents are mixed-breed, the chances of the puppies resembling the parents are a bit low, as in most cases, they will combine different traits from both parents. This could explain why it is extremely difficult to find two crossbreeds, like the Labradoodles, that look exactly alike.

The process of breeding dogs shows that temperamental traits can be passed on from a parent to a puppy. This can help you choose the right dog breed for your home as individual breeds share certain temperament traits. However, this does not mean that dogs are machines running on preprogrammed genes. Just like humans, it is impossible for two dogs to have the same exact personality—even if they come from the same breed or litter. In most cases, the environment that a dog grows in will also play a significant role in determining their temperamental traits. Therefore, if you’re looking to add a new pup to your home, you should inquire about his breed and personal history.

You Have a Responsibility to Play

The way you raise your dogs will determine the personality of their offspring. For example, if you ensure that the mom is mentally stable and well taken care of, she will translate that love and care to her puppies, and so they will also grow up to be sweet and loving dogs. Studies have shown that aggressive dogs tend to have unstable and stubborn puppies. If you notice that your dog has a behavioral issue, don’t ignore it, as in most cases, it is a sign of a deeper mental problem such as stress or anxiety. Find the root cause of the problem and address it, even if it means engaging a specialist trainer.

After the mom has given birth, it is also important that you increase the attention you give her, as most female dogs tend to develop post-pregnancy anxiety causing them to neglect their puppies. A majority of people make this mistake: once a female dog has given birth, they switch all their attention to the puppies and completely neglect the mother. As a result, she will feel alone at a time when she needs that love and cuddles the most.

So, do puppies take after mom or dad?Well, puppies indeed take after their mom and dad. But the long-held belief that the mom has more power than the dad over the appearance of a puppy has been debunked by science. When looking at genetics and its influence on puppies, it is important to remember that some of the traits that are passed from parents to offspring are not related to appearance. For this reason, when adopting a puppy, you may want to check the parents’ medical records as hereditary diseases can be passed from a parent to a pup.

And speaking of records, do you know that there is an easy way to keep your dog records organized in one place? Well, the go-to tool you need is a Dog Printable Planner. With a planner, you can gather all information about your dog and put it in a binder. This way, you can reach out for it anytime you want. There are situations when you will need a sitter, a friend, a relative, or a neighbor to watch over your dog. When that happens, the person can use the information on the planner to best take care of the dog in your absence. Check out the printable here.

When Should You Move Puppy Crate Out of Bedroom?

When Should You Switch A Puppy to 2 Meals A Day?

How Long Can You Leave A Puppy in a Crate?

How Many Hours Does a Puppy Sleep at Night?