Home FAQs Why Does My Dog’s Vag Smell Like Metal? 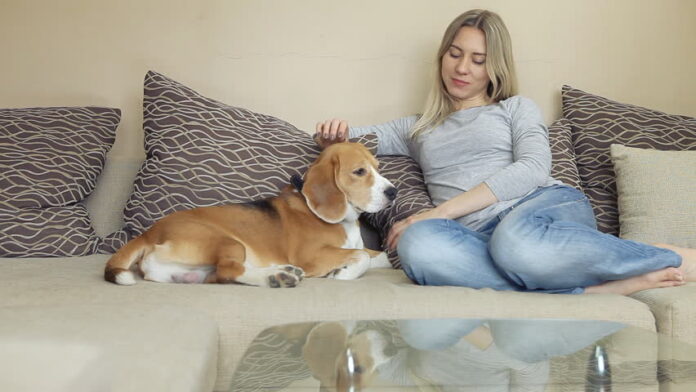 If a metallic smell is coming out of your dog’s vagina, you can’t help getting concerned. Since a metallic smell is often associated with blood, your first response may be checking if your dog is injured. But you can’t see any injuries, and so you rule out blood. Your next step of action may be giving your fur baby a full bath, and if the smell doesn’t go away, you’re left even more confused.

So, why does your dog’s vagina smell like metal? Well, here are possible reasons:

12 Best Probiotic for Dogs with Allergies

Best Foods for Dogs with Allergies: Everything You Need To Know

2. Probably Your Dog Is On Heat

If your dog’s vag smells like a coppery metal, it could be tied to blood. Generally, blood contains iron, which could be responsible for the metallic smell. A dog on heat will usually secrete a blood-tinged vaginal discharge. In fact, one of the best indicators that a female dog’s season has began is the presence of a bloody vaginal discharge. (The easiest way to confirm the presence of these discharges, particularly during the early days of a female dog’s cycle, is to check at your dog’s bedding or on the floor where she likes playing, walking or sleeping). So, if your dog is on heat, it could be the cause of the metallic smell.

However, if your pup has been spayed or if you are sure that your dog isn’t on heat, then a bloody discharge could be a sign of other health issues. Bloody discharge from a dog’s vag could result from trauma, infections, tumors, anatomic abnormalities, blood clotting disorders, and other conditions that affect the urinary tract.

One of the best methods of reducing any kind of odor that is related to a dog’s heat cycle is dosing the dog with liquid chlorophyll. To have the most efficacy, canine experts recommend using the liquid at the very beginning of your pup’s season.

Many dog owners have also reported significant success with doggy diapers. A diaper can either contain odor by itself or a small dab of VapoRub Ointment can be applied on its outer surface to further eliminate the scent. For the best brands of doggy diapers, check out this post: 10 Best Dog Diapers for Periods

3. Your Dog Could Be Suffering From UTI

Metallic smell from your dog’s vag could also be a sign of urinary tract infection (UTI). UTI happens when bacteria enters the urethra, causing infections that can affect the dog’s urinary tract, bladder, and kidneys. It caused by a wide range of factors including weakened immune system, tumors in the urinary tract or bladder, urinary tract abnormalities, and illnesses such as diabetes.

The scent of UTI can be different in each dog. Some people describe it as rancid, others say it is musky, others label it as a rotten fish smell, and still, others say it is a metallic smell. If it smells to you like metal, you could be smelling iron, which is an essential element in the heme group in the blood (a component of the hemoglobin protein). The bacteria which could be causing the UTI in your dog could be breaking the heme group, increasing the accumulation of iron in your pup’s urine.

Besides pronounced odor (different from the normal urine scent), other symptoms of UTI in dogs include frequent urination and thirst, cloudy or bloody urine, whimpering during urination, peeing in the house, and genital licking.

Without care, UTI infections can spread to your pup’s kidney and cause other complex health issues. So, take your pup to your local vet immediately if you suspect she has UTI. Your vet will do a urine test to establish whether it is UTI or not. A vet will also prescribe an appropriate antibiotic to clear up the infection.

4. It Could Be Pyometra

Pyometra is a potentially fatal uterine infection that can also lead to a strong metallic odor. The word Pyometra is Latin, and it means ‘pus uterus.’ So basically, your dog is releasing unwanted pus from the uterus, which is the cause of the smelly odor. In most cases, this condition occurs in old female dogs, and especially one or two months after a heat cycle.

Some of the common signs of pyometra include unpleasant smell from the vagina, increased urination and thirst, excessive pus emanating from the vagina, loss of appetite, and lack of energy among others.

As aforementioned, Pyometra is a potentially fatal infection, so your dog will need surgery treatment immediately. The surgical treatment involves removing the uterus and the ovaries, in a process that is called an ovariohysterectomy. This is a more complicated procedure than ordinary spaying.

If a dog is diagnosed with Pyometra at advanced stages, the surgical procedure is even more complex and the hospitalization period is longer. She will also require intravenous fluids before and after the surgery to stabilize her condition.

To prevent Pyometra, you should consider spaying your fur baby when she is still young. But, if you want her to breed, you can spay her after she has passed her active reproductive years.

5. Your Pup Could Be Dealing With Metritis

If your pup has recently given birth, she is vulnerable to developing metritis. According to Petmd, metritis is an inflammation of a dog’s uterus lining due to bacterial infection (E. Coli) and often occurs a week after a dog has given birth. The condition can also develop after a medical or natural abortion, non-sterile artificial insemination, or miscarriage. It is particularly common in dogs that went through difficult delivery or those who may have retained a placenta (or even a puppy).

Some   of the most common symptoms of metritis in dogs include nasty smelling vulvar discharge (which could be the cause of the metal-lyvag smell in your dog), fever, dehydration, abdominal swelling, loss of appetite, less milk production, and puppy neglect.

Like other conditions we’ve highlighted above, take your pup to the vet immediately if you suspect that she could be suffering from metritis. The vet will test the discharge for bacteria, and if necessary, perform X-ray or ultrasound to view your pup’s uterine interior. Based on the results, the vet will prescribe appropriate antibiotic drugs or therapy for your furbaby.

Now that we’ve helped you identify why your dog’s vag smells like metal, you probably wondering: what’s next? Well, the next time you smell a metallic odor coming out from your dog’s vagina, don’t take it lightly. Early detection is key to curing some of these conditions. If you confirm there are no injuries and the smell does not go away even after a full bath, call your vet immediately for more professional input.

Why Does My Dog Still Smell After Her Glands Have Been Expressed?

Why Is My Dog Aggressive When I’m On My Period? 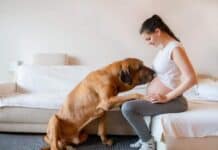 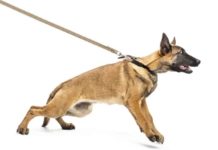 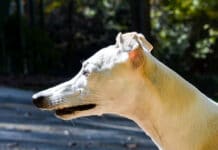 Do Dogs Have A Flehmen Response?