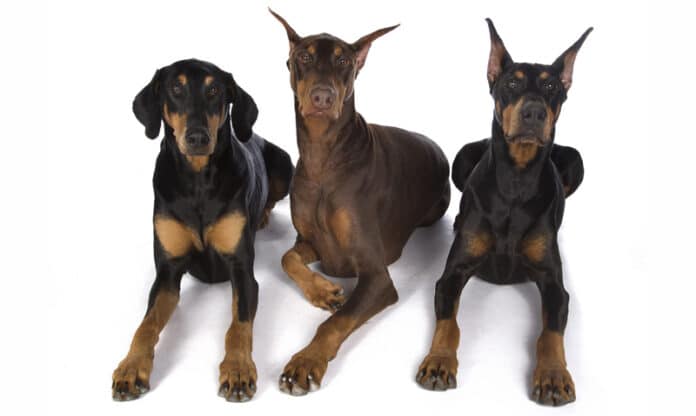 Most Dobermans have their ears bolted upright high up their heads. It is a breed standard the world has gotten used to.

The thought of a Dobie with hanging ears just sounds weird. Yet, naturally, this breed’s ear shape is droopy and broad–similar to that of the Labrador retriever.

In case you didn’t know, this is an invasive surgery where a vet puts the dog under a sedative and chops off a huge part of the pinna.

A week after the procedure, a solid surface is stuck to the ears to train them to be upright.

The dog walks around with the vertical tape until the purpose has been achieved.

So, should crop your Dobermans ears or leave them uncropped?

Let’s be honest here: people who are proponents of ear chopping do it exclusively for cosmetic reasons.

Granted, Dobermans had their ears trimmed in the past for protection purposes.

People back then believed that a canine with less tissue on the ear was more secure.

The attacker wouldn’t grab the ear during an assault. This was especially the case for dogs who took part in dog fighting events.

Then there was the belief that ear cropping improved the hygiene of the ear to a large extent.

In today’s world, trimming is done primarily for aesthetics. The Dobbie is a powerful, compact dog that exudes the disposition and attitude of self-assurance and great nobility.

Adorning a docked tail, vertical ears, and a neat tight coat make a great contribution to his elite and safeguarding character.

Since the trimming practice has been around for centuries, the look is very important for the breed’s history.

The chopped straight ears are paramount to complete his look and make him an effective protection and companion pet.

The Dobie has had his ear clipped for so long that the world can’t have it any other way.

If you have one with natural ears, you must have the hardest of times explaining why he looks the way he does.

In fact, some people will not even identify that he is a Doberman just because he bears broad floppy ears. Many will ask if the dog is a mix of some sort.

Frankly, a Dobie with flabby ears suffers a damaged reputation. He’s thought of to be less of a protector.

When lined with his counterparts with erect ears, he appears to belong elsewhere.

The attitude of a fierce, compact, and active pup doesn’t display as much. That’s a whole lot to deal with.

Is It Really Beneficial To Have The Ears Chopped?

To date, some pet owners think that they are doing their Doberman a favor by trimming his ears.

The good old excuse of reduced ear infections is still at large today.

The theory is that when you cut off a big area of the pinna, the interior of the ear is exposed. This means the ear enjoys a better flow of air.

It also attracts less dust, dirt, and moisture. Ultimately, the likelihood of infections takes a nosedive.

On the other hand, uncropped ears can easily heat up, become moist, and smelly—the perfect breeding ground for a host of parasites and bacteria.

While this may be true to some extent, it has been discovered that Dobermans are not at risk of ear infections.

So, cropping may help your pup to a certain extent but not in a grand manner.

There’s also the theory that an erect ear can localize sound better than a droopy one.

The latter can localize sources to as much as a 5-degree cone while the former can only do a 20-degree cone.

If your dog performs search and rescue jobs, sound localization can be a big deal.

What Are Some Of The Cons Of Ear Cropping?

While trimming looks good and has a few benefits, it also comes with a number of cons.

The first one is the morality issue. Frankly, cropping is not an accepted practice. It is actually forbidden in England, Australia, and a number of European nations.

America doesn’t have qualms with the practice but there are many activist bodies that strongly oppose it.

According to them, the procedure is simply unnecessary. There’s absolutely no need to subject the dog to pain and torture just so that he can “look good”.

The American Veterinary Medical Association (AVMA) is one such body that wants the process of ear cropping and tail docking completely prohibited in America.

They argue that the invasive procedure puts the dog at certain risks and for no reason at all.

Speaking of risks, ear cropping does come with a lot of them. Sure, some canines don’t suffer life-threatening consequences of the procedure.

However, if it goes sideways, things can go south, real fast.

For one, some dogs develop a negative reaction to anesthesia. They can suffer kidney and liver failure.

Even if they manage to survive the sedative, they might develop post-op infections that can become deadly.

Complications from the surgery can also more problems for the pooch in the future.

Then there’s the psychological damage the surgical procedure inflicts on a dog.

So, which one is better?

A majority prefers erect ears simply because it is a widely accepted breed standard.

However, a Dobie with flabby ears looks just as cute and charming.

Take some time and assess what’s right for your dog using the information provided here and elsewhere.