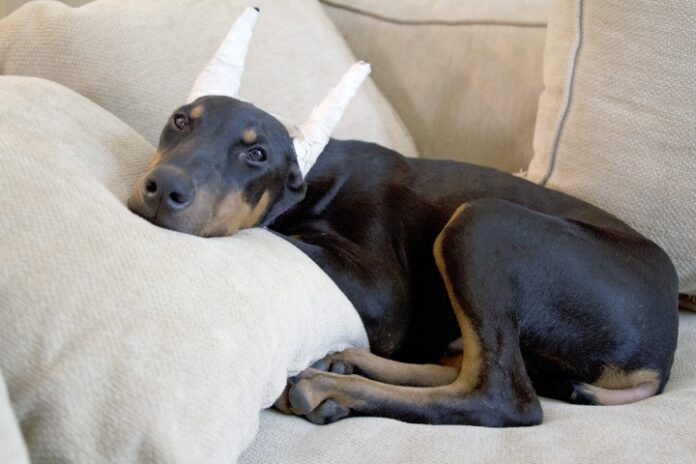 Your little Doberman puppy just had her ears cropped and then posted. Naturally, you are wondering when the posting should come to an end. One quick look at the internet and you find conflicting theories that you are left confused than before. Not to scare you but if you don’t get the posting timelines right, you might end up with results you didn’t anticipate. Granted, cropping does a good job when it comes to changing the shape of the ears but it’s half the battle.

To get them to jolt upwards and remain there forever, posting is necessary. If you post for a short time, the ears might not be as erect as they should. You might end up with a V-shape that is less than what you bargained for. On the other hand, if you keep the posts for too long, it becomes unnecessary for the poor dog. Sure, they will get the job done but your dog will have to bear the discomfort for no reason at all. So, when should you actually stop posting your Doberman’s ears?

Until They Stand On Their Own

This subject is one with differing opinions. Different pet owners subscribe to different schools of thought. However, most dog experts agree that the best time to stop posting is when your dog’s ears can stand on their own. This may take one week, a couple of months, or one year depending on the style of cropping, the posting technique, the ability of the ears to erect and other factors.

Ideally, the only way to know if the ears are in an upright position is to actually look at them without the posts. Do they remain erect or flop a little when the posting is off? Essentially, your pup’s ears should be erect when he is both alert and when laying back. Sometimes, they tend to go upwards when the dog hears something and gets excited. When the excitement passes, the ears may recede downwards and assume a V-shape. To be safe, you might want to keep posting for a few more weeks in this case. If the situation persists, bring the dog to the vet to assess if there’s an issue. Besides standing up, the ear should be completely healed. It must not have scabs, open wounds, and all that.

The second theory is to stop posting after the teething stage. Dobies often get their ears cropped as their deciduous teeth fall out and permanent ones come in to replace them. The teething process does the rounds on the poor dog’s body. It deprives it of calcium. The effect is felt all the way to the ear. The cropped ear has a tendency to droop a little during this time. Sometimes the ears would be upright for a few days only for them to flop again.  Additionally, one ear can behave as it should while the other one droops. Parents understandably freak out when they see this.

However, you don’t have to be. Just keep posting and re-evaluating until the teething stage is passed. After the teething stage, the likelihood of the ear falling back is very low. Of course, you want to check if the results are pleasant even after teething. Else, you might end up being disappointed.

While we are on the subject of teething and ear posting, you want to be extremely careful. There are cases where a Doberman’s ears stood upright as they should be before teething. When the teething stage came around, the ears began to flop. This goes back to the issue of cancer depletion. Also, chances are the ears weren’t properly posted the first time. To prevent this, watch how your doggie’s ears behave when he is teething. If you notice them going down, let the vet take care of the issue. Often, this means going back to posting until the original shape has been achieved.

There you have it – a guideline on when to stop posting a Doberman’s ears. Whichever theory suits you better, you have to be careful when monitoring the progress.  If it comes down to it, both methods will come to play for the benefit of getting the best results. After all, who want less-than-perfect results after going through the entire ear cropping process?