Home News & Resources Can Dogs Have Nightmares And Pee?

Like with any pet owner, you have every reason to get worried when your dog pees in his sleep.

Although peeing while sleeping is quite common in dogs, particularly among puppies and older dogs alike, it can indicate severe underlying issues should the habit continue for days or weeks.

Nevertheless, not all instances when a dog pees in his sleep suggest that they have kidney disease, urinary tract infection, diabetes, or other underlying conditions that are associated with dogs peeing in their sleep.

At times, it might be because he is experiencing nightmares.

So can nightmares be the reason why my dog is peeing in his sleep?

Yes, it can. Sleep incontinence and nightmares have been known to be the leading reason why dogs pee in their sleep.

Like humans, dogs, too, have nightmares since they have similar sleeping patterns to humans.

Some of the apparent signs that your Fido is having nightmares include yelping or barking in his sleep.

He might also show signs of irritation while still asleep. Or, he could be twitching or shaking while sleeping.

Some people have reported noticing a puddle of urine on their dogs’ beddings shortly after their furry friends showed all signs of having a nightmare.

For instance, it isn’t uncommon to hear your dog scream in the middle of his sleep, only to find out he has peed on his bed while he is still dead asleep.

If you haven’t seen this behavior before, then it is certain he peed because he was having nightmares.

Dogs can also accidentally pee in their sleep as a result of a nightmare. The same way dreams tend to rob dogs control of their bladder, nightmares too can prompt them to wet their beds accidentally. This is especially common in smaller and older dogs.

If you suspect your dog is wetting his dog in his sleep due to nightmares, it is good you deal with the reasons that are making him have nightmares.

Maybe he isn’t getting enough rest or he is going through horrifying experiences.

What Do Dogs Think About When They Are Alone?

When A Dog Howls, Does It Mean Death?

8 Best Fire Hydrants for Dogs to Pee On

How Long Can a Small Dog Hold Its Bladder Overnight?

Will My Dog Forgive Me for Hitting Him? 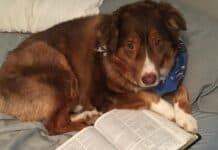 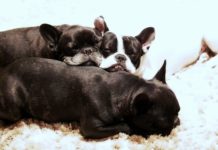