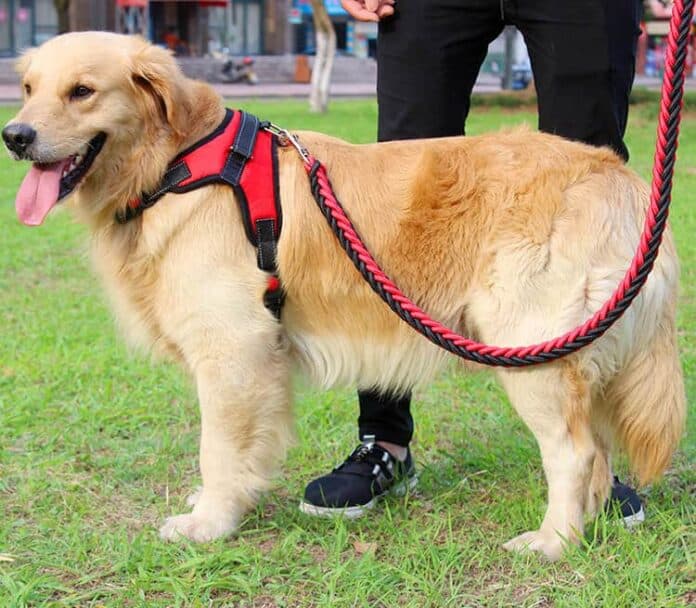 When shopping around for a dog, the breed you get matters more than anything.

Sure, dogs come with their individual characters and temperaments but some of these things are breed-specific.

For example, if you are not an active person, it would be dumb to get a Weimaraner because you cannot keep up with her daily exercise requirements.

Similarly, if you are a first-time owner, you don’t want a breed that is too stubborn and overpowering.

In this guide, we take a look at 10 dog breeds that aren’t great off-leash.

Some dogs are okay being let out to roam freely but others… not so much.

If you are planning to own any of these dog breeds, a good leash should be among the first things you should shop for.

Number one on the list is the cute and furry Akita.

This breed is famous for many things including beauty (fluffy coat and sweet curled tail), courage, loyalty, and affection.

However, this is no easy breed to own. This is a big dog with a solid physique that can intimidate even the most experienced dog owner.

With 80-130 pounds of body weight to throw around, the Akita can overpower you with relative ease. To make matters worse, the breed has a strong prey drive as it was bred to hunt bears.

If you let her go off-leash, her hunting instinct might arise making it hard to control her.

The Siberian husky was developed to pull sleds in Alaska and other tropical regions. If you live in the tropics or a cold area, you have probably considered owning one.

Like the Akita, the Siberian husky is eye candy. With a double fluffy coat, the breed is so beautiful and perfect for warm conditions.

She has a happy-go luck attitude and great work ethic, many people easily fall for the breed.

Nevertheless, don’t be too quick to let her off-leash. This breed also has a super-high prey drive. When she sees the neighbor’s cat, a moving car, or a child running around, she can go bonkers.

Siberian huskies are escape artists as well. They can dig under the fence and disappear for days (or forever).

These are enough reasons to always keep them on leash.

Everything You Need to Know about Dog Sled Teams

The Weimaraner is not the best off-leash because of one thing: speed.

According to Dogopedia, the fastest dog is a Weimaraner with a top speed of 35mph (56km/h).

Members of this breed can go from 0-100 in a couple of minutes.

Add that to the fact that they are ardent hunters and can run for miles and you know they are best on leash.

No matter how fast you are, you will not be able to catch up with your pet if she decides to make a run for it.

Alaskan malamutes are like Siberian huskies in more ways than one. They are strong, intelligent, and independent.

Sadly, getting them to cooperate can be a real task. The breed also loves to escape the compound to explore what lies beyond.

If you’ve owned one, you might have noticed that she’s always digging the next hole to use as an exit out of the home.

By walking her off-leash, you make it easy for her to take off.

An Alaskan malamute also loves to chase anything that moves. That adds to the list of reasons to keep her on a leash at all times.

A popular choice among pet owners, the Rottweiler, also called the Rottie is a happy, playful doggie. She makes life so much fun and merry, no matter the setup of your family.

Unfortunately, without early socialization and proper training, this breed can show aggression at random.

Blame it on the fact that she is fiercely protective of those she loves. When her guarding instinct is triggered, nothing matters more than keeping those she loves safe. She will fight other dogs, people, and animals in a blink.

Rottweiler’s bite force is incredible. Things can go south real fast. And yes, the breed has a high prey drive.

Just keep your Rottie on a leash, period.

With her fluffy goofball look, the chow chow is easily a favorite in America and the world over. Having one is like owning a big teddy bear. Your fingers will always itch to pet the dog, especially around the neck region.

As for personality, chow chows are a lot to deal with. They are best described as independent, aloof, and strong-willed – much like cats.

Granted, they create strong bonds with certain members of the family but they do so on their own terms.

The breed is also famous for being aggressive and stubborn and thus can be hard to control.

If something catches the attention of your chow chow during your walks, best believe they will bolt.

The game of chasing them down will wear you out, to say the least.

The American Staffordshire or pitbull has a bad reputation worldwide. Some countries have banned the breed altogether citing its likelihood to injure and kill other dogs and people.

Well, most of the stories are based on lies. With the right training, a pitbull can turn out to be the best-behaved dog.

However, it is true that the breed is quite intimidating and loves fighting other dogs.

Once triggered, a pitbull is likely to ignore all kinds of peacemaking attempts from you or the other dog.

In the event that your doggie gets overstimulated by another canine and gets into the red zone, things can get out of hand pretty fast.

To be safe, just keep her on a leash.

Scoring the third position in the list of the best dog breeds with a good sense of smell, the beagle can pick up scents from miles away. The breed comes after the bloodhound and the basset hound as far as scent is concerned.

It is for this reason that beagles are among the worst breeds off-leash.

Besides smelling things from afar, beagles can retain the scents for days.

During walks, their scent abilities can be triggered causing the dog to go after the prey.

Good luck running after a beagle that is determined to hunt down prey!

10 Dogs with the Worst Sense of Smell

Like the Weimaraner, the Greyhound is a racing dog breed. She is known for both stamina and endurance.

With a slim, streamlined, and strong physique, this canine can take off with the speed of lightning.

Running after her if she bolts is a tall order. To complicate things further, greyhounds are hunting dogs with high prey drives.

Things are better on-leash when it comes to a greyhound.

As a member of the hound family, the basenji is hard to control at times.

When she sees something moving—bunnies, rabbits, squirrels, cats—her immediate reaction would be to hunt it down.

Being off-leash gives her the freedom to do that.

She is also very independent and stubborn. Any attempts to recall the dog will be unfruitful when she chases after prey.

Just keep her leash on to avoid trouble.

There it is—the list of 10 worst dog breeds off-leash.

Keeping your dog on a leash is part of responsible pet parenting. It gives you control over the doggie. In case the dog tries to run off, you can step in and save the day.

Only let the dog enjoy some freedom if the dog is sufficiently trained and socialized.