Home FAQs Do Dogs Have Clavicles?

For the last 7-9 millennia, dogs have worked alongside human beings as guards or herders.

Despite being sometimes smaller than sheep and cows, herding dogs have always displayed great skill and efficiency in the grazing fields.

They protect humans and livestock from danger so fiercely and courageously.

Part of the reason our amazing doggies are good at what they do is that their bodies are designed for success.

If you’ve ever watched a whippet or greyhound take off in an open field, you know that dogs are built for speed and agility.

In the wild, they had to hunt for food and that meant running after prey. They also had to run for their lives when tables were turned and predators were after them.

When you study your pet’s body, you can pinpoint areas that make her agile.

One of the common bones for flexibility is the clavicle.

Humans rely on this bone heavily to carry out daily tasks such as holding babies, playing cricket, opening the door, and more.

Do dogs also have it? Is that the reason for their agility? We spill the entire scoop on the topic below.

What Is A Clavicle?

Also called a collarbone, the clavicle is a long horizontal bone that connects the shoulder blade (scapula) and the breastbone (sternum).

For humans, the bone is very functional and visible, especially for thin people.

It sticks out on the area between the shoulder and the neck. Along with tendons, ligaments, and muscles, the clavicle gives us the ability to lift and pull stuff as well as swing our arms.

It is a thin bone because it is covered in skin, unlike other bones which are covered with muscles.

One of the most important functions of the clavicle in other species is to connect the limbs to the rest of the body.

Do dogs have the Clavicle?

The topic of whether dogs have clavicles has been studied over the years by different researchers.

In all instances, it has been found that these furbabies do have the bone.

However, unlike other creatures which use it as a connection between the limbs and the body, the canine clavicle is an independent part of the body.

This means that it is detached from the skeletal system and exists purely on its own. You will often hear it being referred to as “a floating bone”.

For doggies, the clavicle is rudimentary and measures about 1 cm long.

Rudimentary means that the collarbone is basic and denotes a leftover body part that stuck around after evolution.  Well, these claims don’t hold true.

While the clavicle floats freely, it contributes to the functionality of the doggie in more ways than one.

Since it is not connected to the shoulder blade, it gives the canine a ton of agility when running.

The collarbone works hand in hand with Fido’s flexible spine and robust hind limbs to propel the body forward. In the end, all three parts increase the length of stride on the run.

PH McCarthy and AK Wood launched a study to find out the anatomy and radioactive nature of the canine collarbone.

One of the first things that they discovered is that clavicles come in all shapes and sizes. They gathered that after studying the anatomy of 50 dogs in detail.

Also, the researchers found out that each clavicle is connected to the brachiocephalic muscle’s clavicular intersection on the caudomedial part.

Other attachments include the radiating bands of the fasciculi and the cleidocephalic muscle at its mastoid part.]

Additionally, the study also revealed that the collarbones are the first bones to ossify in a dog. This was observed in 88% of the 50 dogs that formed the study.

What Is The Function Of The Clavicle?

As a rudimentary bone, a dog’s clavicle is thought to have no function in the dog’s body. This is the same story for cats and other animals.

Since it is not connected to other bones, it is viewed as a useless feature.

However, this feature serves a huge function in the life of your doggie. It contributes to his efficient speed and agility in many ways.

As the thoracic limb moves, the clavicle and the connective tissue bands stabilize the position of the brachiocephalic muscle.

The canine collarbone also protects blood vessels in both the brachial plexus (a network of tissues running from the leg up to the neck) and armpit from damage during locomotion.

Do Clavicles Suffer From Damage?

In humans, broken collarbones are the most common bone fractures. This is according to the Healthgrades website.

From falls to accidents to playing sports, the clavicle is the number one target for breakages. Mild cases only require a sling to heal but severe ones may need surgery.

Luckily, the story is a little different for dogs, cats, and other animals with floating clavicles.

To begin with, the collarbone is not attached to the skeleton. This means that it is less likely to get hurt like other bones.

Secondly, it is not heavily used like other bones in the body. For your adorable pooch, the femurs are fractured the most during an accident, followed by the tibia and lastly radius, and ulna.

Dogs are some of the most agile creatures in the animal kingdom.

Granted, the stretchy and flexible spinal cord contributes to this but the clavicle plays a part too.

So, yes dogs have a collarbone except it is not designed like that of human beings. 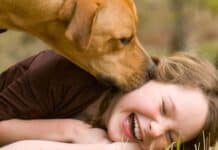