Home FAQs Does The Male Or Female Dog Determine The Size Of The Puppies? 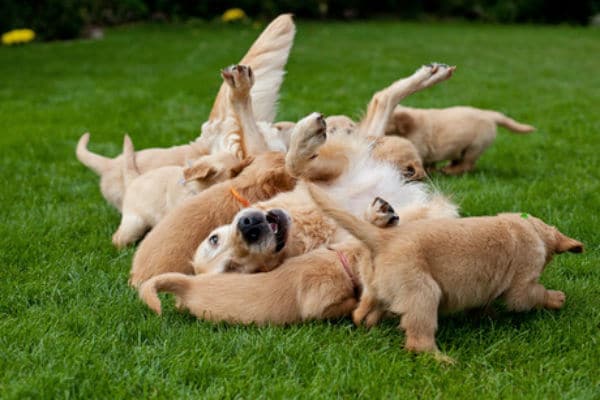 We all have preferences and desires when picking a dog to own.

Wouldn’t it be nice to know right from the word go how your puppy will look like in the future?

Can you really predict the size long before the entire breeding process begins?

Join us as we discuss in detail who, between the male and female dog, determines the size of the resulting puppy.

Both mom and dad may have an equal chance as far as feline genetics goes.

When a dam and a stud mate and conceive a litter, each party contributes 39 chromosomes.

In total, the genetic makeup consists of a total of 78 chromosomes from both parents.

These, in part, impact the appearance of the offspring in terms of coat color, eye color, coat length, and other physical traits.

For instance, if you are looking for a brown dog, one or both parents should carry the genes of a black coat.

But It Gets Complicated…

To say that the DNA of a puppy is as simple as 39 pairs of chromosomes from both parents would be a lie.

Essentially, there are two types of genes – the dominant and recessive genes.

The canine’s dominant gene is what determines how the dog will look in the end.

If the dog has more dominant autosomal genes, he will take on the looks of the said parent and vice versa.

Sometimes one parent passes on a copious amount of the dominant autosomal genes, making the litter look exactly like the mum.

As long as the dog gets dominant genes from one parent, they will get the said trait.

On the other hand, he needs recessive genes from both parents to get the trait. The recessive gene rarely affects the look of the dog but since he carries the code in his DNA, it can affect the offspring later.

What does this all mean? There’s no telling the actual percentage of who, between the sire and the dam, affects the physical characteristics of the puppy.

It all depends on how the genes will play out in the end. This implies that the puppy can look like mom or dad.

Can You Predict The Size Of A Puppy?

There are many theories on how to guesstimate the size of a puppy. These include the following:

Before you get all caught up with the science of breeding, you can tell how the size of the puppy by just looking at the breed.

If it is a cross between two breeds, things can go either way with regards to the size.

Again, it depends on whose genes make the DNA of the offspring.

Here’s another theory that explains how to determine the size of a pup.

Of course, you would have to wait for the dog to be born to use this method.

So, if you are breeding a Great Dane that looks unusually small in his early years, just check his paws.

If they look big like those of a Great Dane, chances are he will grow to be a massive dog in the future.

Unfortunately, this theory has shortcomings of its own, though.

Some dog breeds have paws that don’t necessarily correspond to the size of their bodies. A good example is a bulldog that has too big paws for his little body.

If you end up using it, realize that it gives estimates not accurate findings.

3. Chart The Growth Of The Puppy

If you intend to estimate the size of the puppy, consider keeping a record of his growth. This is a rather tedious method but it may work for you.

Depending on the breed in question, you might want to chart the puppy’s growth between 3 months and one year to get a picture of his size as an adult.

Related Post: How Much Weight Should A Puppy Gain Per Week?

4. Utilize a Height And Weight Calculator

Here’s another way to determine the size and height of your dog right from puppyhood.

Just by keying in the size and weight of your puppy among other details, a height and weight calculator will predict how the dog will look like in the future.

Some graphs can give you the same readings as well.

Not only do these tools help you know how big your puppy will get but they also give you a rough idea of the ideal crate size for the puppy.

5. Look At The Puppy’s Bone Structure

In addition to the size of paws, check the legs of the pup.

Does he have a massive bone structure alongside a large paw?

If yes, you are looking at a big dog. If his legs and paws are smaller, he may end up being a smaller canine.

While you are at it, don’t forget that some breeds don’t play by the rules. For instance, the Greyhound is a tall and skinny dog but one with a fine bone structure.

Does the male or female dog determine the size of the puppies?

Well, canine breeding is a rather complex subject.

Even with purebred dogs, it is virtually hard to predict the size of the resulting puppies by just looking at the physical characteristics of the mom or dad.

Granted, there are different methods used to estimate size but these are not guaranteed.

The best thing is to wait and hope for the best.

How to Get More Female Puppies in a Litter

How Many Times Should You AI a Dog?