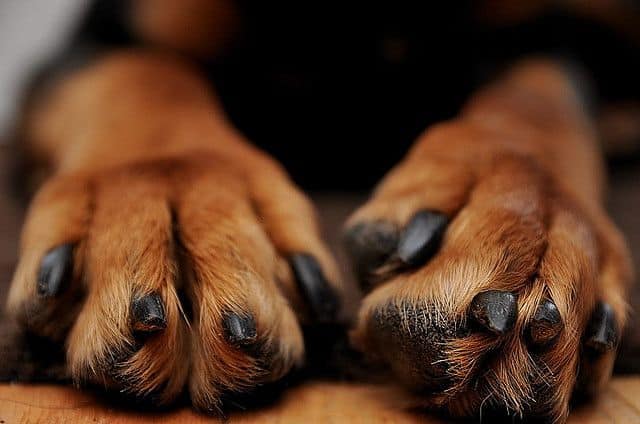 Even at puppyhood, their paws appear bigger than usual. They are designed that way in preparation for the future—a dog’s paws should offer overall body support, so it is only logical that a big dog should have big paws that can support his taller height and heavier build.

This has led to the old wives’ tale that you can predict how big your puppy will get by looking at the size of her paws.

While big paws is a thing for big dogs, it is not unusual to have a small breed with big paws as well.

Like large dog breeds that are designed with big paws to support their weights, big paws in some small-bodied dog breeds also serve certain purposes: they help these dogs engage in certain activities.

Some of these dogs are bred as working or hunting dogs, for instance, which require them to have paws with wider surface areas for digging, sniffing, and working.

If you are wondering which small pups fit the profile, here is a conservative list.

The Bulldog is a beloved toy breed in the United States and the rest of the world.

According to the American Kennel Club (AKC), it was the 5th most popular breed in 2020.

It still is a favorite of many. There are so many reasons for this amazing score.

For one, bulldogs have charming personalities. They are friendly, easy-going, and gentle. Hanging out with kids and adults comes naturally to them.

Their goofy and clown-like characters also make them fun to be around.

Plus, they are remarkably cute to behold.

Bulldogs have the biggest paws of all small dog breeds.

With a powerful and muscular build complete with wide shoulders and heads, it is easy to see why this breed needs bigger paws.

The paws help support the 50 pounds of weight they carry around and balance the body adequately.

Back when bulldogs were used to fight bulls, these big paws played a huge role in the fight.

Like the Bulldog, the Beagle is a popular breed in America and the world over.

It comes two spots below the bulldog at the 7th position, meaning he’s loved by a vast majority of people.

Can you blame them? With incredible hunting ability, the breed makes for a great hunting companion.

From tracking and retrieving rabbits, wild jackals, and wild pigs, count on the breed to do it all.

Even if you are not a hunter, you will love the beagle for her cheerful and affectionate disposition.

No doubt the breed loves and craves the attention of people.

For a small dog of about 20 pounds, it is amazing that the beagle has big paws.

However, when you think about it, the breed is muscular and solid just like the bulldog.

As a hound dog, the paws are heavily utilized when tracking game. The bigger the size, the better the hunt.

Recognized as a short-legged breed with a long body, the Dachshund is an interesting breed.

This ferocious little hunter has been around for over 600 years hunting and living alongside his human buddies.

His sausage-shaped body is a huge advantage when sniffing out rabbits, badgers, and other small game. He can dig up holes with relative ease to access prey.

Add this to his courageous and clever personality and you have nothing short of an astonishing hound dog.

The fact that he’s a small breed means he is convenient to transport from one point to another.

Dachshunds have characteristically big paws. You can tell by just looking at one.

With stumpy legs and a long body, the dog needs strong big paws to support the weight of the entire body.

This famous lap dog from Mexico is also among the list of small dog breeds with big paws.

Granted, not all Chis have big paws but it not uncommon to come across those with larger limbs.

Often, the dogs are bigger in size than their counterparts hence the need for bigger paws.

Genetics is also a factor for the size of the paws. Some chis tend to have the recessive gene that causes the paws to appear bigger than normal.

If you end up with such a dog, just accept that you have a Great Dane in a Chihuahua’s body.

After all, Chis are small dogs with huge personalities. They don’t have a problem provoking larger breeds and starting fights.

In such a case, the big paws will come in handy in intimidating and fighting the other dog.

Compact in size, willing to learn, and friendly temperament, the Welsh corgi is a great family pet.

Whether you own the cardigan or Pembroke version, there is no doubt you will end up with a lovable pet.

This dog is loyal and smart. He learns commands quickly and always excels in canine sports including herding, obedience, rally, and agility.

He also loves to protect the family with his dying breath.

If you can handle plenty of yapping, a little stubbornness, and high exercise needs, this breed will fill your life with a lot of joy.

Like the Dachshund, the corgi has a long body and short legs.

The cardigan is much shorter than the Pembroke but both are short doggies with big paws.

The paws help bear the back of the dog and the overall weight of the breed.

They also help the doggie to navigate slippery terrain when hunting or running around.

He was bred over 200 centuries ago in England to hunt foxes, thanks to their amazing hunting instincts.

Even with sufficient training, you may never fully eliminate the hunting side of a Russell.

If you have cats or small pets at home, he will see them as prey to be chased around and tortured.

To be the best hunter, the Jack Russell Terrier must have big paws.

Not only do they help with the actual retrieving of the game but it helps the dog to dig down for rodents.

With short legs, the breed also needs bigger paws to cushion him when walking or running around and hold his weight.

Are Rat Terriers Smart? Here’s Why They Rank High for Dog Intelligence

The first thing that comes to mind when a Basset hound is mentioned is a dog with sleepy eyes and droopy ears.

At one glance, this breed always appears drowsy and lazy. However, he is anything but those things.

He comes second to the Bloodhound when it comes to the sense of smell.

If you are looking for a hunting companion that can sniff out the game for miles, the Basset hound never disappoints. He can track scents that are weeks old and lead you right into prey territory.

He may be small in size but this breed is rather bulky and heavy. The average weight is 50 pounds with some going as high as 60 pounds.

Supporting upwards of 50 pounds is not possible without having strong and big limbs.

These help offer protection when the dog is outdoors hunting or running around. They also hold the weight of the dog without caving in.

Related Post: Is a Basset Hound Chihuahua Mix Right for You?

Small breeds tend to have equally small paws that can sufficiently maintain their tiny bodies.

However, these listed beauties need big paws for one reason or the other.

They add to the convenience and comfort of the canine and help him survive the outdoors much better.