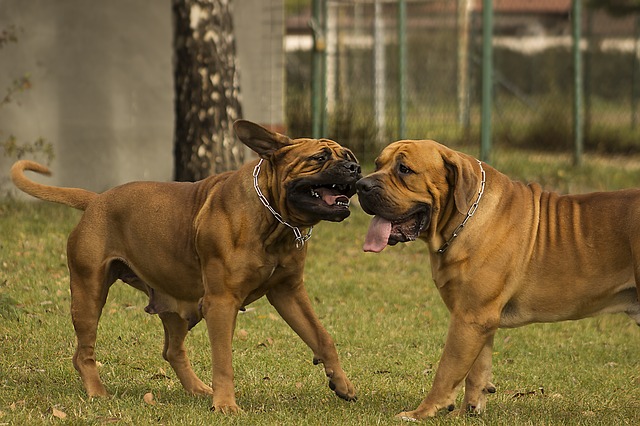 Registries of purebred dog pedigrees across the globe specify breed standards for each dog breed as well as varieties that are accepted within the said breed.

Essentially, the standards are guidelines for breeders to ensure that the physical traits of a breed, its temperament, and other important features are maintained.

So, the main goal of having a breed standard is to eliminate breeding exaggerations that can be detrimental to the health, welfare, soundness, and essence of a breed.

One of the standards that registry bodies focus on is the coat color. The coat colors of a breed are often expected to meet certain standards. Each breed, therefore, has desirable (or acceptable) and disqualified colors.

By definition, desirable colors are the ideal colors that won’t be detrimental in any way to the welfare, soundness, and health of a breed.

On the other hand, disqualified colors are those that are considered to be deviations from the breed standard and may impact a dog’s health or performance negatively.

So, which Boerboel colors are desirable and which ones are disqualified?

We’ll find out shortly but before then, a few basics…

The Boerboel breed is a descendant of ancient Bullmastiffs, Boer Dogs, and other large working dogs brought to South Africa by Dutch settlers.

They were used to defend the settlers’ homesteads from lions, leopards, hyenas, and all kinds of wildlife while also providing companionship.

The dogs defended against predators and fulfilled other working functions due to their courage, strengths, agility, reliability, and stamina.

Boerboels are still the guard dogs of choice among farmers in South Africa and still very popular among urban dwellers for the same reason.

They have typical mastiff-style, muscular look and have the reputation of adapting fast to the ever-changing and unforgiving conditions.

The breed is very independent though he still needs a great deal of attention.

A Boerboel is very loyal, protective to his family, andaffectionate with children.

Boerboels come in a wide range of acceptable/desirable colors, including:

The current Kennel Union of South Africa recognizes all shades of brown, red, and yellow (fawn) with limited white patches on the legs and fore chest.

Brindle color pattern has irregular, visible vertical lines of black hair on a brown (red/tan) or fawn color base.

The majority of Boerboel brindles are dark brindles although there are also acceptable lighter shades of brindle.

Although there are not many brindle Boerboels, it’s always a color that has great pigmentation.

There are also reverse brindles. Reverse or ultra-brindle is when the dog has stripes of sable/red/brown on a dark background.

Reverse brindle Boerboels can also be described as black Boerboels with tan or fawn marks.

In fact, some reverse brindle Boerboels tend to be entirely black with faint light marks on a few parts of the body.

The black mask is among the most common Boerboel modifiers.

The mask can be full, partial, and extreme (when the black extends all down the chest or even to the toes).

The further the black mask extends over the head and muzzles the better. This is because the black pigmentation not only gives Boerboels a distinctive look but also protects the dogs against harsh UV rays from the sun.

While the black mask is highly desired, black Boerboels are not allowed to compete in the breed shows as the color is not considered acceptable.

This is a brown (red, tan), fawn, or brindle Boerboel with a white chest that can possibly extend to a white collar, white legs, and feet.

A piebald is basically white markings on a brown, fawn, or brindle dog.

The total area of white should not exceed 33%, else the dog is disqualified.

Spots and ticking within the white may disqualify the dog.

Some Boerboels present white spots especially around the paws, neck, and face, although excessive white is less desirable.

In fact, it’s considered a fault if over 30% of the Boerboel’s coat is white.

Piebald and Irish Boerboels are considerably less desirable to many owners because it is believed that these dogs lack the invaluable black eumelanin pigmentation compared to their brown, tan, or red counterparts.

Piebald and Irish color coats tend to have a lot of white, which is considered to be very genetic. This means that when you breed Boerboels with Irish or Piebald in their immediate background, you are likely to end up with the two color coats quite often.

Many owners also tend to associate Irish or Piebald-marked dogs with skin cancer.

However, this shouldn’t be a concern in Boerboels. This is a breed that is well pigmented.

So, provided that the nose, lips, eyes, palate, paw pads, nose leather, toenails, the anus, and around the genitals have black pigmentation, Piebald or Irish marked Boerboel shouldn’t present any problem of getting skin cancer.

The only health issue that tends to come with these two coat colors is when their paw pads are white.

White feet are often more tender and take longer to toughen up compared to black paws.

So, dogs with white paw pads are more likely to go lame when exposed to long walks or runs.

But low desirability of Piebald or Irish Boerboels shouldn’t discourage you from welcoming one into your home.

If a dog has Irish or Piebald markings but has many appealing qualities that you want in a Boerboel, particularly if you cannot find the same traits in other colors, then it is logical to go for it than a dog with desirable colors but with less appealing qualities.

Any color or combinations other than the options described above are considered to be disqualifying colors. They include:

While it is important to know the different colors that Boerboels come in, the truth is that the coat color of a dog doesn’t matter.

Whether you welcome a cream, red, fawn, yellow, Piebald, or black Boerboel to your home, they will still have their charming personalities.

Perhaps the only thing you may be worried about is the fact that Boerboels of certain colors (Pieblad and Irish markings) are believed not to pass along the black eumelanin pigmentation, which is effective in dissipating 99.9% of harmful UV radiation—hence vital for people who live in sun-drenched environments.

If anything, most Boerboel owners won’t even compete in dog show rings. And in some cases, organizers of some dog shows permit non-standard colors.

So, sometimes it is not that important to stress yourself with a dog’s coat color, especially if you don’t plan to participate in AKC competitions.

Regardless of the color, get a Boerboel and you won’t regret it!

Boerboels are famed for their intuitive intelligence, confidence, obedience, and protective nature.

If trained well, socialized early, loved, and cared for, this breed will be an affectionate and devoted member of the family who will always stick by your side like your shadow.

How Much Does a Boerboel Dog Cost?