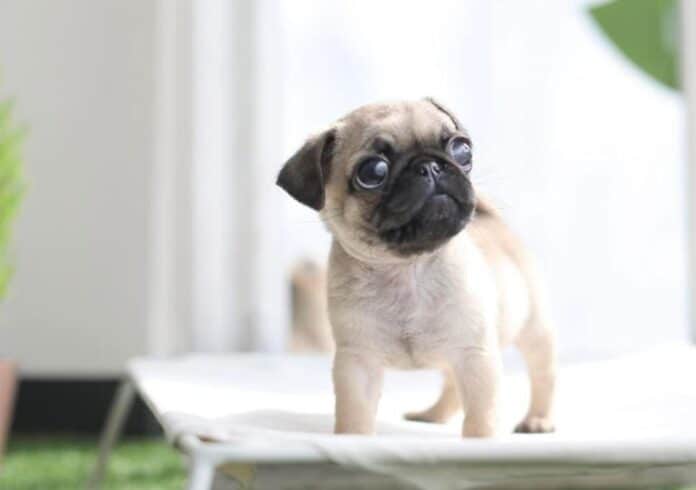 Teacup dog varieties are prized for their super small sizes. With less than 5 pounds, they can fit pretty much anywhere including a teacup (no wonder the name). The popular teacup pug is a playful, loving, and social pet.  From getting along with adults to playing endlessly with babies and being peaceful around cats, this dog makes a good family pet. As a very small dog, he is easy to transport, feed, and care for. On the flip side, he comes with challenges of his own. In this guide, we will zoom in on the lifespan of the teacup pug.

What Is A Teacup Pug?

The teacup pug is the outcome of breeding the Chihuahua and the ordinary pug. It is called teacup because he falls under the range of weight of a normal pug, which is 14-18 pounds. Sometimes breeders mate super small pugs until they get the desired size. An adult teacup pug weighs 2-5 pounds and stands at the height of 6 inches (a normal pug is 12-14 inches tall) at the shoulder.

Despite being unusually small, teacup pugs have the same features as their bigger counterparts. These include a compact and muscular physique, a square face full of wrinkles, and a black snout. The only difference is that the teacup variety has a longer snout and longer legs. They are also as playful and low-maintenance as other pugs. Unfortunately, the variant is not AKC-registered nor is it recognized by other kennel groups.

Generally, teacup pugs have lifespans of 6-10 years. This is a big contrast to the normal pug lifespan which is 12-15 years. It gets worse—a majority of teacup pugs don’t even reach 6 years. This is because they are prone to several health complications.

To begin with, these are very fragile dogs that remain young forever. They are not great for families with young children as they can be mishandled by tiny humans and end up getting hurt in the process. Their bones are so brittle that if a chair falls on them, they can have joint dislocations.

According to PetMD, teacup dogs are also predisposed to liver shunts. These are congenital birth defects that impair the liver’s ability to remove toxins from the body. You can spend not less than $6000 to treat a liver shunt.

Other problems faced by the teacup pugs include brain defects, respiratory issues, skin disorders, kidney problems, heart issues, and hip problems. They are also susceptible t a lot of dental and gum issues.

Without proper care, therefore, teacup pugs suffer one or more of these health complications. If they are not caught early, things can go south pretty fast.

The Dangers of Inbreeding

Breeding of teacup pugs also negatively affects their lifespans more than you think. Because of their small size, these little doggies fetch a good price in the market. People who live in tiny apartments, transport their dogs a lot, and those looking for a dog that doesn’t eat copious amounts of food go for teacup dogs. This pushes the price over the roof. Sadly, breeders who only care for cash have resorted to bad breeding strategies to make sure they get the required size.

A good example is inbreeding which is the mating of closely related dogs e.g. a mother and a son. While this gives rise to predictable puppies, it also opens the door for health complications such as miscarriages, puppy abnormalities, and physical deformations. Others don’t take care of their dams and sires before breeding and fail to offer the correct medical help during and after the birth of puppies. All these have a ripple effect on the lifespan of the teacup puppy.

Their average lifespan is 6-10 years. The lucky ones can go all the way to 10 years but a big percentage never lives to see their 6th birthday. Based on this, it is safe to say that teacup pugs don’t live that long. Normal pugs can live up to 15 years meaning their small counterparts reach about half their age before they kick the bucket.

Some enjoy a quality life free from diseases that plaque other teacups. However, others aren’t so lucky. From kidney problems to respiratory issues to gum illnesses and bone complications, teacup pugs are prone to a plethora of health complications. You can bring down the risk by purchasing your puppy from a reputable breeder that utilizes legal breeding methods. They should give you a detailed medical report of the pup so that you have an idea of what might happen in the future. Additionally, if you take good care of your doggie, he will enjoy a healthy life.

3. What Do Pugs Usually Die From?

The biggest is neurological disorders which affect the brain causing inflammation, muscle loss, seizures, and lethargy. Cancer is the next fatal issue among pugs followed by infections and finally congenital disease.

Teacup dogs don’t grow beyond 10 pounds. Many of them don’t pass the 5-pound mark, to be honest. A 3-month teacup pug puppy weighs about 10 pounds, which is about the same weight for a 10-week Labrador retriever. This means that your teacup pug will maintain the size of a 10-week lab or a 3-month beagle all her life. She will always look small to you and those around you.

5. Why are teacup dogs so expensive?

As mentioned before, teacup pugs are in high demand. As a result, they are a bit expensive. By a bit we mean you will have to cough out $300 – $4000 for one puppy. Apart from high demand, teacup pugs are also expensive because they are hard to breed. They need more care than other dogs. It also takes years to get the perfect teacup dog. Then there are understandably a plethora of ethical restrictions around the breed that breeders must comply with. All these things affect the price in one way or another. You can always adopt a teacup pug from a rescue if you have a tight budget. Not only is this route cheaper but you will be fighting illegal breeding methods used by breeders to get the small-sized dogs.

Related Post: Pros and Cons of Adopting Vs. Buying a Pet

Teacup pugs may look appealing but they have some of the shortest lifespans in the canine world. They are at risk of many health complications that affect the quality and length of their lives. If you are planning on owning one, don’t be shocked if your fur baby dies before reaching age 6.To be safe, consider choosing a normal pug instead of the teacup version. It is still a toy dog but with a longer lifespan and fewer health issues to worry about.

How Long Do Bullmastiffs Live?