Home FAQs How Long Should I Keep My Dog On Chicken And Rice? 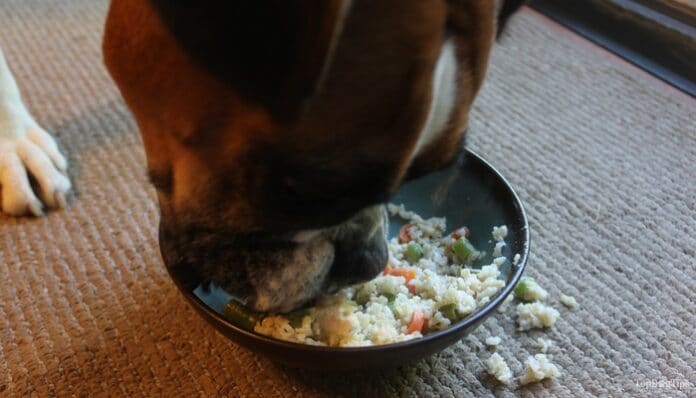 Whenever you are under the weather, you tend to feel better after downing a bowl of chicken soup.

Your dog, too, could greatly benefit from the diet when he has tummy troubles.

Whether he is constipated, vomiting, bloated, or has a runny stomach, chicken and rice can help. Your vet probably told you this already.

But the question is how long should you keep your pup on the diet?

The Magic of Chicken and Rice

When your dog is throwing up, has gas, is constipated, or experiences persistent diarrhea, it means that his gut is in shambles.

Homemade chicken and rice have been shown to ease these symptoms to a greater extent.

For one, chicken is very easy to digest. It makes it easy for your pup’s system to handle incoming food.

After being sick for a while, the last thing your fur baby needs is hard-to-digest foods.

Secondly, chicken is a super protein that packs all the necessary ingredients a dog needs. These include minerals, amino acids, and vitamins that nourish the coat and skin and enrich the bones. Plus, dogs go crazy for chicken.

If your pooch has a low appetite because of the sickness, the chicken will make him normal again.

Rice is similarly easy on a dog’s digestive system. Vets recommend it for a sick dog since it helps bind stools.

A dog with diarrhea can really benefit from eating rice for a few days. It stimulates the growth of good bacteria to regulate bowel movements.

When combined, rice and chicken make for a fantastic diet that offers plenty of nutrients while giving the gut a much-needed break.

How to Give the Bland Diet to Your Dog

While the bland diet is great for a sick dog, the benefits lie with the preparation.

The main reason why it is highly recommended by vets is because it is low in fiber and fat while still being high in carbohydrates and protein.

When you cook it in oil, it defeats the purpose by adding unwanted fats. Boiling is the ideal mode of preparation.

Besides boiling the rice and chicken, steer clear of any seasonings for the best results. Some of them are toxic to canines.

You want to use white rice rather than brown rice for this recipe.

Granted, brown rice is better under normal circumstances since it is lower in glycemic index.

It doesn’t spike blood glucose making it suitable for diabetic dogs. However, it is harder for a dog to digest it compared to white rice.

The recipe is pretty straightforward:

You want to exercise some caution with the portion. Keep in mind that your dog’s gut needs a break.

Rather than giving one huge meal in the evening or two as is your custom, seek to serve frequent smaller meals.

For example, if your pup often eats five cups of food per day, start giving one cup of the bland diet at a time.

Let him rest for two to three hours before giving him another cup.

How Long Should A Dog Be On The Chicken And Rice Diet?

This will heavily depend on your vet’s recommendations. If you are following your vet’s instructions, they will let you know when you need to stop giving the dog the diet.

Else, if you are not under the vet’s advice, always watch your dog’s poop to determine when to stop giving rice and chicken.

Typically, your pup’s poop should go back to normal after 2-7 days. But as you might have guessed, this is based on the individual dog.

If the gut heals faster, the poop will harden and go back to normal in record time.

However, if the damage is too much that the gut still needs a break, it might be a while before your pup’s system heals completely.

As a matter of fact, vets often recommend a 24-hour fast before the bland diet. They do this if the gastric upset is pretty intense.

The fast resets the system and gives it time off from digesting food. The entire system including the mouth, esophagus, stomach, small intestine, and large intestine get a chance to heal.

After the fast, offer the bland diet of chicken and rice.

If after a week, your dog still has runny stools, consider going back to the vet. The problem might be pretty bad to warrant medical attention.

How Long Till a Dog Poops after Chicken and Rice

On average, expect your pup to poop normally after 2-3 days. Some can even take one day only to get the system back on track again.

Without the bland diet, a pup can go as long as one week for the stools to firm up.

As a rule of thumb, you don’t want to use the chicken and rice diet for extended periods of time.

Although it has plenty of minerals, it is not a wholesome diet. For instance, an active dog relies on proteins and fats as his main energy sources.

Both the chicken and rice don’t have any fat in them. Without enough energy, the dog’s gut will be rendered unable to consume the food, which means he will not have enough nutrients in his body.

You don’t want to use the bland diet for more than a week. As aforementioned, see the vet if the problem persists after a week.

I. Introduce the Bland Diet Gradually

Dogs have super sensitive tummies. Any hasty change in their diets can throw their guts in turmoil.

Since you are trying to alleviate a problem in the gut, you want to be careful with the chicken and rice diet.

To be safe, mix the rice and chicken in his food a few days before going completely bland.

In the same way, gradually reintroduce other meals after the diet.

A chicken and rice meal is higher in calories compared to other diets.

Be sure to calculate the calories in the diet and match it with the pup’s calorie requirement.

The length at which to keep your dog on chicken and rice heavily depends on how well (or otherwise) he responds to the diet.

The best judge is the consistency of his stools. As soon as he eliminates normally again, consider giving the diet a rest.

How Much Pumpkin Should You Give a Dog For Constipation?

Is Scrambled Egg Good For Dogs with Diarrhea?

How Much Yogurt Should You Give a Dog With Diarrhea?