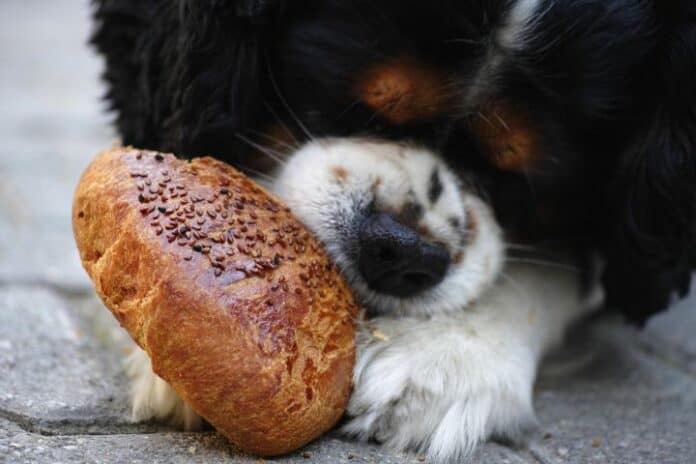 Bread is a staple in America. From sandwiches to hotdogs and burgers, there’s some sort of bread in most diets in the United States.

Because of this, it makes sense to wonder if you can serve your dog bread.

Your sweet pup asks for a piece of the pumpernickel bread you are having. Because you don’t know whether it is safe for her or not, you chose to not give it.

So, can you give your dog pumpernickel bread? Let’s investigate…

What Is Pumpernickel Bread?

If you are familiar with rye bread, you probably already know what pumpernickel bread.

It’s essentially a variation of rye bread. This dark brown break that originated in Germany is translated as “hard to digest” as it is much dense than your normal white bread.

It traditionally is made with coarse rye flour and grains although some recipes combine white or whole wheat flour.

The original recipe of pumpernickel bread is rather unique as it is baked for as much as 24 hours in the oven at low temperatures.

It is also made with fermented sourdough starter and not instant yeast as is the case today. The starter gives the bread a tangy taste and makes it healthier.

In contrast to rye bread, pumpernickel has both rye flour and rye kennels and has a close taste to the bread.

It is much darker than rye bread and other bread types because it takes a long time to bake.

Also, the endosperm of the rye kennels, as well as the whole wheat flour, contributes to the dark color.

Rye bread, on the other hand, is made from the rye berry’s endosperm and not the whole fruit.

Is It Safe For Dogs?

Bread, in general, is safe for your dog. As long it doesn’t have any toxic substance, your dog can have it on occasion. That goes for pumpernickel bread as well.

A small amount from time to time will not do any harm to your dog. You can feed one or two slices when the rest of the family is eating pumpernickel bread.

Pumpernickel bread is the healthy version of your standard white bread. It is higher in macronutrients and fiber than other bread types.

It consists of B vitamins, pantothenic acid, calcium, magnesium, zinc, and phosphorous among other nutrients.

The best part about it is that it doesn’t trigger blood sugar as is the case with white bread. Essentially, it has a low glycemic index (GI), which prevents blood sugar from significantly spiking up. The bread is, therefore, suited for diabetic dogs. Learn more here: Homemade Diabetic Dog Treats: Diet Tips, Recipes & FAQ’s

When your doggie eats a small amount of it, she will enjoy some of these benefits as well.

With that said, you don’t want to make pumpernickel bread the primary source of food in your dog’s diet. Resist the temptation to feed your doggie four slices every morning.

At the end of the day, your doggie needs an all-around diet with proteins, fats, carbohydrates, minerals, and vitamins for his overall health and well-being.

Plus, bread is very high in calories and can lead to weight gain and obesity.

While pumpernickel bread is, for the most part, safe for canines, it can be unsafe under certain circumstances.

For one, if your doggie has a wheat allergy, don’t feed her pumpernickel bread with any wheat in it.

As mentioned earlier, some recipes use wheat while others don’t. Some doggies have gluten intolerance and don’t do well with wheat products.

In addition to that, steer clear of pumpernickel bread if it has the following ingredients.

Pumpernickel bread is sweet and healthy for humans and dogs alike. Your dog can get away with small amounts here and there.

Provided you still feed the normal dog diet, you can offer this bread as a treat.

Just watch out for the dangerous ingredients mentioned on this list.