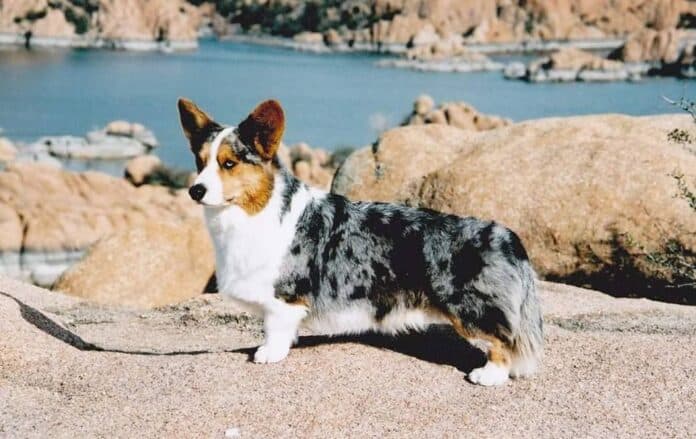 The merle coat pattern in dogs is a favorite among many dog enthusiasts. There are many reasons for this.

For one, it is unique. It is not your standard pattern. Merles come in all color possibilities. One can have more white on their skin while another would have more sable patches.

The eyes is another thing. A merle dog may have eyes bearing different colors.  The pattern is downright breathtaking.

Merle corgis are pretty rare but the breed exhibits the merle pattern occasionally.

If you’ve ever looked at one online or face-to-face, you will accept that this pattern is very attractive.

But, as usual, you want to know both the good and bad of owning a merle corgi. For instance, merles are famous for having some serious health concerns.

To keep you up to date, here is everything to know about merle corgis.

Merle dogs are becoming more and more common. If you live in a neighborhood with plenty of doggies, you have probably spotted one already.

Australian shepherds, dachshunds, Great Danes, Catahoula Leopard Dogs, and border collies are notorious for the pattern but other dog breeds including corgis can get it as well.

The coat pattern, also called dapple, is where random spots of dark pigment appear over a lighter shade of the said color.

When you look at a merle corgi, his coat pattern will appear as though someone spilled bleach on him during laundry.

Part of the coat will remain intact while other parts will have a lighter color. The patches of solid color are often irregularly shaped and can be located anywhere in the body.

The pattern comes about when a corgi has a single M-allele. All Merle corgis have the genotype Mm which means they have one allele for merle with the other one being non-merle.

Non-merle dogs are mm meaning the m-allele is recessive and not dominant.

When a corgi inherits a heterozygous pair (mM or Mm), he will exhibit the merle pattern.

If he inherits a homozygous pair of MM dominant genes, she will be called a double merle. Double merles are pure white in color with blue or gray eyes.

Most merle corgis are blue which means they wear a blue merle with a gray or black marble pattern.

The pattern may also contain shades of red and tan and can be accompanied by white patches around the chest, middle of the face, neck, and legs.

Liver merle corgis are also not common but they are available as well. Here, the pattern presents as a combination of black and brown. Sometimes you can have blue tri merles (same as blue merles but with tan points).

While the merle gene primarily affects the coat, it affects the eyes too. Merle corgis can have the usual striking blue eyes but the gene can affect only one eye.

For others, only a part of one eye is affected by the merle gene. What this means is that a merle corgis is unpredictable, beautiful, and unique.

No two merles look alike, no matter their relationship.

Merle Corgis Can Only Be Cardigans

If you know a thing or two about corgis, you already understand that they come in two varieties: Pembroke and Cardigan.

The Cardigan Welsh Corgi is the oldest of two by about 2000 years.

The notable difference between the two is the tail. Cardigans have a long, bushy, fox-like tail while Pembrokes have docked tails.

The former is also heavier by about 8 pounds than the latter despite both having the same height.

Finally, Cardigans come with a wider range of colors (brindle, blue merle black and white with tan, or red and sable with white) than Pembrokes (red, sable, and tricolor).

The merle gene is only found in the Cardigan Welsh corgi. This is according to this study which established that the gene doesn’t exist in the Pembroke Welsh corgi.

If you ever come across a Pembroke merle corgi, it means that it is across and not a purebred dog.

As a matter of fact, the merle Cardigan Welsh Corgi is an acceptable breed standard according to the AKC.

On the other hand, merle Pembroke Cardigan corgis are not recognized by the AKC.

Merle corgis do not differ from other corgis as far as temperament is concerned. They are calm, loyal, territorial, and very protective.

However, as Cardigan corgis, they tend to show affection less than Pembroke corgis. They can also be short-tempered.

In general, expect a sweet dog that has more good qualities and a few bad ones.

If Queen Elizabeth 11 has owned over 30 corgis in her lifetime, it means the breed is nothing short of amazing.

Merle corgis look stunning and fascinating. However, the merle gene has been known to have some serious side effects for the dog.

The most common health problems include the following.

A study done to know the dangers of breeding merle dogs revealed that dogs with one M-allele copy have a 2.7% chance of being deaf in one ear and a chance of 0.9% of deafness in both ears.

It gets worse for double merle corgis. The double merle genes pushed the risk of deafness in both ears to 15% and 10% in one ear.

Double merles have a high risk of becoming completely deaf within the first few years of their life. Some get there sooner than that.

In contrast, dogs with only one merle parent reveal no hearing problems.

Again, double merles are at greater risk here with most having a condition called microphthalmia. This is where the eyes are smaller than normal causing an increase in the ocular pressure.

Increased ocular pressure can cause pain and discomfort and in severe cases, the dog can go totally blind in both eyes.

Apart from the health concerns that are specific to merle corgis, keep in mind that corgis, in general, are susceptible to certain health issues.

The main one is hip dysplasia, thanks to their short legs. This is a situation where the hip joint stops functioning normally. It is especially true with obese corgis and those that lack exercise.

Another common issue is progressive retinal atrophy which is a condition that affects the receptors of the eyes and compromises vision over time.

Corgis are generally very pricy because they are such a high demand.

Breeders always know that they can always sell the dogs so they push the price so high.

As mentioned before, merle corgis are both beautiful and rare. These are not your typical coat patterns found in your local shelter. Very few reputable breeders sell merle corgi puppies as well.

To add to that, breeders don’t like breeding merle corgis for fear of getting double merles.

Because of these two reasons, merle corgis are expensive.

Expect to cough about $2000 and $5000 depending on the location, quality of the puppy, and breeding (mixed or purebred).

The price can go much higher especially if you are looking for pedigree puppies or those with medical records, proof of health, and more.

Responsible breeders take the extra step to check all parents for health concerns before breeding. Whatever you do, make sure you buy your puppy from the right guy.

Merle corgis are some of the cutest animals in the canine world. There’s no reason why you shouldn’t get one if you desire it.

As long as you make sure to buy one from a reputable breeder with the health checkups of both parents, you will score well.

Also, ensure the puppy is not double merle lest you get a dog with a ton of health problems.

Sable Corgi: Facts You Need To Know Before Owning This Ebony Beauty